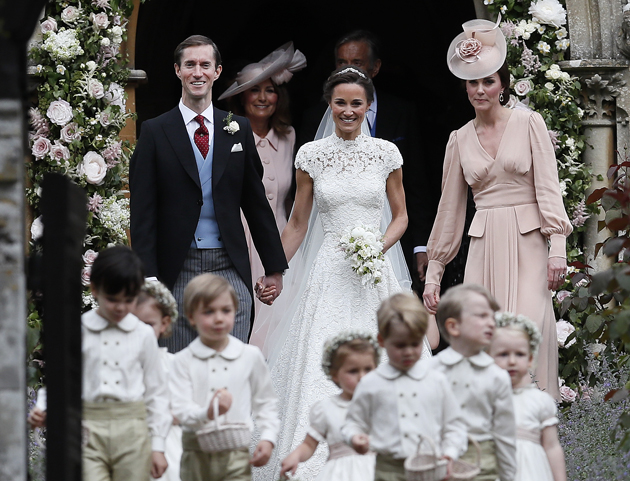 Unlike the grand televised spectacle that captured big sister Kate’s nuptials to Prince William in 2011, Pippa Middleton opted for something a little more low-key and closer to home when she married former professional race car driver and hedge fund manager James Matthews on Saturday, May 20.

Pippa prepares to walk down the aisle with father, Michael.

The pair exchanged vows in front of approximately 150 guests at St. Mark’s Church, a 12th century medieval establishment situated on a private estate in Englefield, Berkshire, just six miles from the village of Bucklebury where the bride grew up with her parents and siblings. The ceremony was officiated by Rev. Nick Wynne-Jones, the resident priest.

Dressed in a stunning gown by British fashion designer Giles Deacon, the 33-year-old bride was preceded down the aisle by her royal nephew and niece—three-year-old Prince George served as page boy and two-year-old Princess Charlotte as the littlest of bridesmaids.

Prince George and Princess Charlotte prepare to walk down the aisle.

Although the Duchess of Cambridge did not serve as her sister’s maid-of-honour (it appears she helped the children walk down the aisle), Michael and Carole Middleton were on hand to give their daughter away to the 41-year-old Matthews. According to sources, the proud parents played a significant role in planning the big day—the couple run their own party planning business, Party Pieces.

In order to keep the numbers of guests at the parish church to a minimum, Middleton installed a “no ring, no bring” policy—meaning married couples only were allowed to attend. However, according to The Daily Telegraph, Prince Harry’s 35-year-old girlfriend, American actress Meghan Markle, was permitted to attend despite being neither married or engaged to the royal, which only fueled rumours that their own wedding is imminent.

The Duchess of Cambridge reminds the littlest members of the wedding party to be on their best behaviours.

With the service now behind them, the newlyweds will travel to Middleton’s parents’ home in Bucklebury for a marquee reception. Carole and Michael Middleton purchased the Georgian Grade II-listed manor house back in 2012.