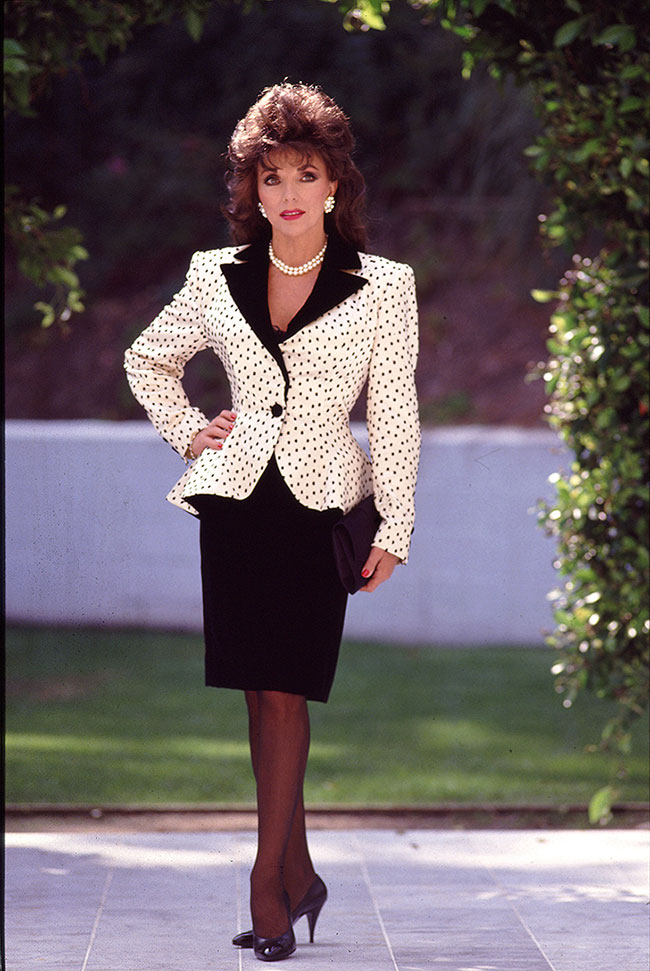 Actress Joan Collins poses in a Nolan Miller suit with a polka dot wide shouldered jacket on the set of the TV series Dynasty in Hollywood, California in June 1988. Photo: Eddie Sanderson/Getty Images

For a soap opera to be a ratings hit, there must be a superb resident villain—and they are just as important as the hero. Not only must this Machiavellian character provide conflict for the various players but they must possess these other traits: good looks, sex appeal, fabulous clothes and a razor sharp tongue to deliver some cutting barbs. Only then would they earn the hatred of viewers—and this is a good thing because it will ensure they’ll keep tuning in to watch the good versus evil dynamic.

A villain must also be brilliantly cast with the right actor in the role. With some villains, it’s hard to picture another actor playing that part or vice-versa; in fact, some actors do such a splendid job a villain they are forever typecast in the role.

The best villains also leave a lasting impression. They will often supersede the leads and go down in history as the most memorable thing about a long-gone show. It’s hard to believe that Joan Collins’ nefarious character, Alexis Colby on Dynasty was not always part of the 198o’s prime time soap. When the Aaron Spelling show made its debut in 1981, the first season was not exactly a ratings hit and producers decided they needed a first-class villainess to spice things up. Elizabeth Taylor and Sophia Loren were reportedly offered the role but both turned it down. Then Joan Collins, relatively unknown in the America at the time, was cast and Alexis Colby made her appearance in the first episode of the second season.

In her first scene—a courtroom appearance to testify against her ex-husband, Blake Carrington—Alexis was dressed in a glamorous white and black suit and dramatic hat, signalling the over-the-top fashion tone the show would come to be known for. From that moment on, ABC network executives and producers knew they had hit the casting jackpot with the right actress for the part.

The show’s ratings started to climb to the top and fan mail began pouring as audiences became fascinated with the scheming, claws-drawn Alexis. She was beautiful, sported a luxurious wardrobe dripping in furs and jewels, was sexually provocative and, most of all, delivered some deliciously bitchy one-liners.

But what catapulted Alexis into the Villain Hall of Fame was, perhaps, in a rare moment of art imitating life, Joan Collins’ personal life ran parallel to the character she played on television as the tabloids chronicled her very public divorce, her court appearances (complete with a dramatic fainting spell, it should be noted), her spread in Playboy magazine and her appearances at the most glamorous parties.

When it came to prime time villainesses, there was none other like Alexis Carrington Colby, who not only became a cultural phenomena but is intrinsically linked with Dynasty. If Alexis of Dynasty was the Queen Villain of prime time television in the 80s, then J.R of Dallas was King Villain. Played by Larry Hagman, J.R. had two primary interests: oil and women. And he would often stoop to all sorts of low to acquire both.

And, like all good villains, he was a master at the acerbic one-liner.

Like Alexis, J.R also reached television nirvana when the character became a cultural phenomena, not just in America but worldwide.

In 1980, the series had one of its most famous cliffhanger episodes with, “Who Shot J.R?” During the summer break before the show returned in the fall, it became the subject of magazine articles as speculation rose to a feverish point about who shot J.R. People even started wearing t-shirts, emblazoned with the words, “Who Shot J.R?” When the show returned in the fall with the episode, “Who Done It”, 90 million Americans tuned in to find out. Internationally, a record-breaking 360 million people tuned in to watch that episode.

In 2012, when TNT revived the show, they wisely brought back Larry Hagman and other key stars from the original 1980s soap to continue the saga. The show debut to impressive ratings but during filming of the second season, the 81-year-old Hagman died. And perhaps as a testament to his popularity—because, really, what would Dallas be without J.R.?—the show was cancelled after the third season. With the popularity of Dallas, producers created a spin-off in the form of Knots Landing, which revolved around the lives of a group of middle-class families (including a black sheep Ewing brother) living in a tony cul-de-sac in Los Angeles.

The resident villain was Abby, played by Donna Mills. Unlike the scenery-chewing Alexis from Dynasty, Abby had a veneer of niceness about her, but beneath her well-put-together surface, she was manipulative, power-hungry, devious and in no short order would resort to blackmail and seduction to in desire for power and control.

Her character also relished in some cruel mind-games. When Val, the wife of Gary Ewing, suspected her having an affair with her husband and confronted her, Abby essentially replied, “That she was not saying yes and she was not saying no, but, what she was saying, was that she could have him anytime she wanted to.”

What made Abby fascinating was, despite her numerous manipulative schemes, her character was not one dimensional like most villains. In a rare moment of compassion, she donated one of her kidneys to another character to save her life. The series Flamingo Road debuted in 1981, a week before Dynasty premiered and seemingly had the backdrop for a hit soap: A set of attractive characters in a wealthy community, scheming and with dark secrets. But unfortunately, despite a great start, the series was cancelled after two seasons. But it did give the world a superb villain. Constance Weldon, played by Morgan Fairchild landed on E! list of The Most Wicked Women on Television. Constance Weldon embodied the qualities of the ultimate villain vamp: stunningly beautiful, thin, wealthy, spoiled and pretty much intent on sleeping with every man in town, despite being married. Surprisingly, sometimes the villain comes to a messy end before the series concludes. Playing the scheming, husband-stealing neighbourhood divorcee, Edie Britt—an arsonist who went so far as to fake her own death—actress Nicollette Sheridan left or was fired from Desperate Housewives. (We’re still a little unclear on what happened there). Edie Britt, the show’s resident villain was essentially killed off on the show. Who knows what was going on behind the scenes of this prime time soap which was a hit in the 2000s, but needless to say, Sheridan filed a wrongful dismissal suit against the show’s creators.