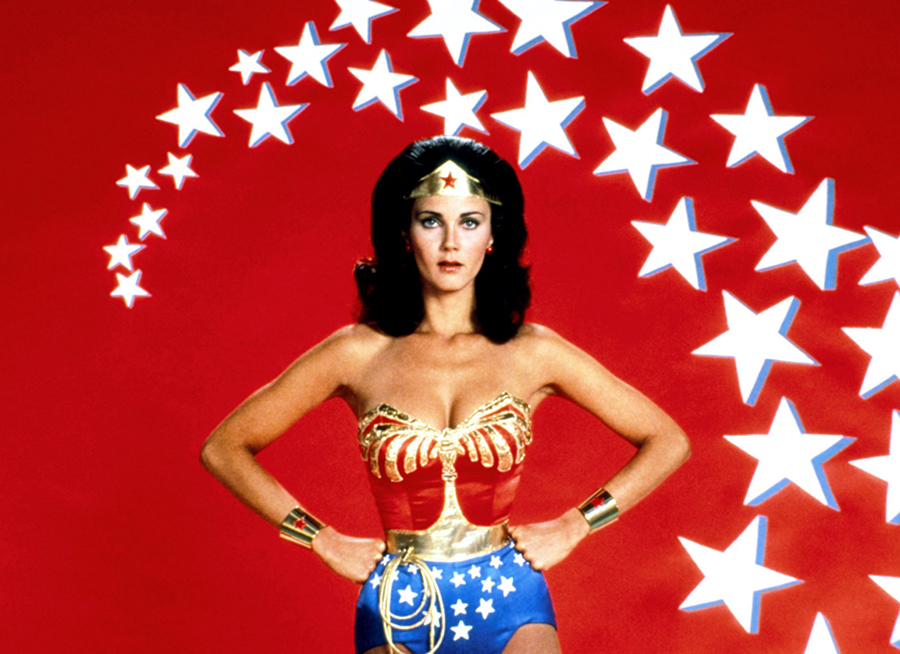 Since her comic book debut in 1941, Wonder Woman has undergone an extensive evolution.  And this week marks a milestone in that evolution: Nov. 7, 2020 is the 45th anniversary of the debut of the Wonder Woman (or, The New Adventures of Wonder Woman as it was also called) TV series.

So to mark the occasion, we’re looking back at 10 fascinating facts about the beloved superhero.

Creator, William Moulton Marston had some unusual inspiration for his Wonder Woman even by today’s standards. The DC consultant based the character on a polyamorous relationship he had with Elizabeth Holloway Marston — to whom he was legally married — and Olive Byrne.

In fact, Wonder Woman’s iconic cuff bracelets are based on the bracelets Byrne used to wear on each of her wrists to symbolize her commitment to him.

Marston created the character to rival the strength of Superman with the addition of the unique characteristics he had come to associate with women. In that vein, Wonder Woman would often attempt to reform her enemies.

2. She had a longer name

Marston’s original name for his character, Suprema, The Wonder Woman was shortened for her comic book debut in All Star Comics #8 in December 1941.

3. The story behind the lasso of truth

Marston was also a psychologist, lawyer and inventor. It’s said that the latter may have played a role in Wonder Woman’s lasso of truth — which compelled bad guys to tell the truth. His invention of a discontinuous systolic blood pressure test in 1915 eventually led to the invention of the polygraph —essentially a much more mundane lasso of truth.

4. The inspiration for Dr. Psycho

Marston also took inspiration from his real life enemies. Dr. Psycho, Wonder Woman’s woman-hating nemesis, was inspired by his Harvard Professor, Hugo Munsterberg, who was very vocal in his stance against granting women the right to vote. “The political machines would win new and disgusting strength from the feebleness of these woman to resist political pressure,” he once said.

Within a year of her debut, Wonder Woman’s popularity had exploded. By 1942 she was granted her own series and soon became the first woman to enter the justice league.

But even the world of superheroes wasn’t without it’s fair share of gender inequality. In the Justice Society comic book series, Gardner Fox would demote Martson’s butt-kicking, crime fighting, reform seeking powerhouse to the lowly position of superhero secretary, staying behind to mind the phone as the rest of the Justice Society did battle.

The 70-plus years Wonder Woman has been around has also done a number on the continuity of her back story. Originally, her mother had formed her out of clay and she was brought to life by various Greek gods, giving her an array of super powers.

Adding to that, she’s the daughter of Queen Hippolyta, which makes her Princess of the Amazons.

But in the 2011 reboot, Wonder Woman is the daughter of Zeus — King of the Gods.

Soon after Wonder Woman was granted her own series, she was banned by the National Organization for Decent Literature. Their problem was Wonder Woman’s clothes, or lack thereof — which the bishop in charge of the organization said was in violation of their code. “Wonder Woman is not sufficiently dressed,” he wrote in a letter of explanation.

In 1942, Wonder Woman was banned for not wearing enough clothes. When the National Organization for Decent Literature blacklisted Wonder Woman’s book Sensation Comics, the publisher wrote a letter to the bishop in charge of the organization, asking why Wonder Woman had been banned.

“Practically the only reason for which Sensation Comics was placed on the banned list of the NODL was that it violates Point Four of the Code,” the bishop replied. “Wonder Woman is not sufficiently dressed.”

Wonder Woman’s jump to television wasn’t seamless. The first attempt at a live action Wonder Woman came in 1967, in a failed pilot called Who’s Afraid Of Diana Prince? where she took the form of a disquieted teenager confused by her lack of interest in settling down with a man.

Judging by the teaser above, passing on the first one was a wise decision.

The next attempt at bringing Wonder Woman to the screen was much more modest. Cathy Lee Crosby starred as the superhero in a made-for-TV movie in 1974.

But the most well known of the small screen productions was ABC’s Wonder Woman starring Lynda Carter. While it was cancelled after one season, CBS did pick it back up for two additional years.

More recently, NBC’s 2011 attempt at Wonder Woman was cancelled before the pilot even aired.

9. She gave up her powers for a charmed life

Declining the opportunity to travel to another dimension with her Amazon sisters, Wonder Woman surrendered her powers and opted to stay with her boyfriend Steve Trevor. The catch, she would have to surrender her powers and live a normal life.

That normal life involved her opening a mod clothing boutique, dressing in the fashion of the time and learning martial arts.  “The mod years have some great looks for her, but no real fixed costume,” DC Comics archivist and librarian Benjamin LeClear told Mental Floss. “She had a white jumpsuit with a W on it, but she wore all kinds of glamorous clothes in that period.”

10. Gloria Steinem helped Wonder Woman get her groove back

After idolizing Wonder Woman throughout her childhood, Gloria Steinem received permission from DC comics to put Wonder Woman on the cover of the July 1972 issue of Ms. Magazine. “Gloria Steinem put her on the cover in her classic bathing suit and tiara look and asked DC what was going on with Wonder Woman at the time,” LeClear recalled to Mental Floss. “She was horrified to find out she had no superpowers. She said that could not stand. Girls and women needed to know about the strength and power that was Wonder Woman as a superhero, so based on that we put her back.”

What Happens When Superheroes Go Grey?