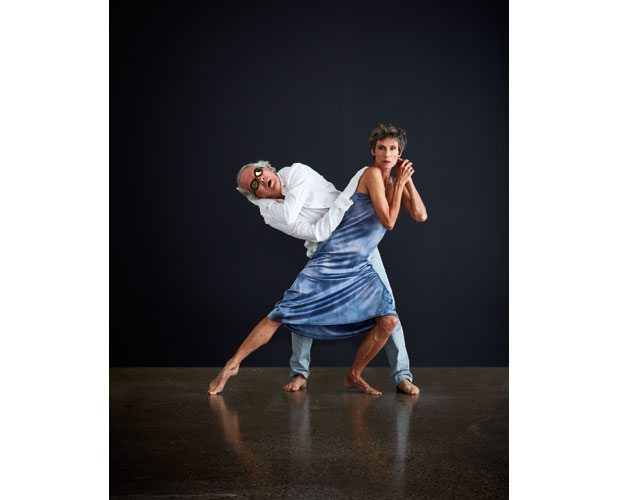 Claudia Moore is always in motion.

Whether she’s performing on stage, running her own dance theatre or organizing the latest edition of her Older and Reckless series, the 64-year-old Toronto-based dancer and choreographer exudes more energy than people half her age.

It’s remarkable, really, that in an artistic field where many step out of the limelight (mostly due to injury) as young as 29, Moore continues to go the distance.

“I’m still learning and discovering new things,” she tells Zoomer over the phone. “I feel so fortunate to still be moving and dancing.”

She later joined the Toronto Dance Theatre in 1976 with then-boyfriend (and first husband) Robert Desrosiers before leaving to become a member of his own troupe in 1980. Notwithstanding their eventual breakup, Moore remained with the Desrosiers Dance Theatre until 1987.

Moore also stepped in front of the camera to work alongside a Canadian icon. In 1983, she appeared in I Am a Hotel, the musical short film written by and starring Leonard Cohen. “[He] was an extraordinary human being, as well as a great artist,” she recalls. “He [would] exude who he was: the monk, the artist, the poet, a life-liver who wasn’t afraid to experience all aspects of humanity.”

Yet despite her stints in ballet, dance theatre and film, Moore’s true calling came in the form of contemporary dance—specifically a style she calls “body poetry.” And, while raising two kids with her second husband, Moore built a reputation for her unique blend of movement, music, text and visual aids.

“I look at movements like words,” she explains. “I am speaking with my body and I think there is a poetry in how the movements of my body come together.”

Now, as artistic director of MOonhORsE Dance Theatre—a name which combines “moon” for poetry and “horse” for the physical and whose erratic capitalization spells out her surname—Moore continues to promote Older and Reckless, her performance series that features the latest works by artists over the age of 40.

In an industry often equated with youth, Older and Reckless provides a community-based creative outlet for dancers seeking to perform their latest works without the additional pressure of artistic or financial merits.

“I actually started Older and Reckless when I was still choreographing quite a bit,” she explains. “It’s extremely difficult to raise the kinds of funds that you need to create and produce a work. [This series] allows dancers more opportunities to do what we love to do and perform in an informal setting and deepen our artistry. We want to be on stage.”

And on stage, they are: What initially started as a niche project 20 years ago has since blossomed into one of the Toronto dance scenes’ biggest draws. And Moore, for one, is surprised by its enduring success.

“I’m not one for thinking very much into the future,” Moore laughs. “I just started something on an impulse and, low and behold, there were lots of other dance artists like me who were looking for chances to be onstage more often. It has grown to include artists from across Canada, so it’s not just the Toronto community now.”

Inclusive by nature—each performance kicks off with an instructional warm up for the audience so they can experience the movements for themselves—Older and Reckless invites viewers to watch mature performers and witness the experiences their bodies hold.

“As we get older, certain things come up in life and we have to put our creativity, both physical and mental, into facing these challenges,” she says. “It takes a beautiful courage and bravery for the older artists to do this [and] I hope audiences see something that really resonates with them in their own life journey.”

“We’ve been around the block and we know we’re not the physical specimens we once were in our youth, but there’s a real willingness to show who we are now,” she continues. “It’s not just the beautiful young ones we all love seeing [on stage], but also those who are reflections of our current reality.”