Happy Father’s Day! Be Glad These TV Dads Aren’t Yours 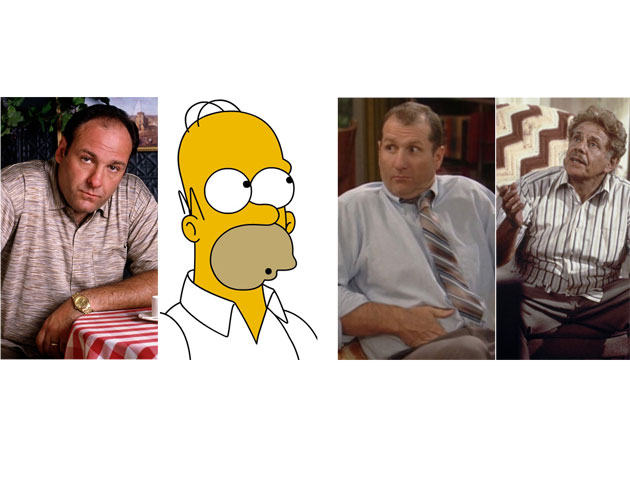 Why is it that, whenever Father’s Day rolls around, we’re hit with a barrage of lists proclaiming everyone’s favourite TV dads? Yes, we all know that Ward Cleaver was pretty much perfect.  But what about the bad TV dads? After all, you can’t really appreciate how good you have it unless you get a glimpse of how horrible it can be. The list of hobbies the fathers on our list enjoy includes lying, cheating, stealing, extra-marital affairs and the occasional murder — and that’s just Tony Soprano. In the end, some do show signs of redemption, but for the most part it’s so much more entertaining to watch these patriarchs at their worst. And the best part about our list? There’s no Ward Cleaver in sight.

“Kids are great, Apu. You can teach them to hate the things you hate and they practically raise themselves nowadays, you know, with the Internet and all.”

Why you should be glad he’s not your dad: There are so many reasons – Let’s start with the fact that he’s wrung his son’s neck out of anger so many times that it’s become one of his trademarks. How about his tendency to favour one child over another, pit them against each other or that he referred to kids as nails in the coffin that is marriage? We could discuss the life lessons he imparts (“Kids, you tried your best and you failed miserably. The lesson is – never try.”), his priorities (“Well, it’s 1 a.m. Better go home and spend some quality time with the kids.”), his valour (“Don’t eat me! I have a wife and kids. Eat them!”) or his intelligence (“I’m not a genius – or are I?”), but we’d need to build a whole other slideshow.

Likelihood for redemption: Believe it or not, quite high. Despite the contempt he openly exhibits for performing his fatherly duties, at the end of the day Homer always manages to rise to the occasion and prove his love for his children. It only lasts until the beginning of the next episode, mind you, but it’s something.

Quotable: “Many Christmases ago, I went to buy a doll for my son. I reached for the last one they had, but so did another man. As I rained blows upon him, I realized there had to be another way.”

Why you should be glad he’s not your dad: Brash, slow-witted, vengeful, prone to fits of shouting and rage – this pretty much sums up Frank Costanza. It’s no wonder his only child, George, grew up to be as neurotic and unbalanced as he did. Imagine you’re a child, and your father invented a holiday – Festivus – to replace Christmas, where elements of the celebration include the all-too-candid airing of grievances and a father-son wrestling match that precludes the gift-giving. It’s hard to blame George for rejoicing upon hearing the news that Frank and wife Estelle were moving to Florida to spite Jerry Seinfeld’s parents. “Your parents are crazy!” Jerry exclaimed upon hearing that news. It’s difficult to disagree.

Likelihood for redemption: As hilarious as Frank Costanza is, it isn’t often he shows genuine compassion for his son. One heart-to-heart involved Frank explaining the various bra sizes George which, inevitably, proved far more entertaining for the viewing audience than it did for his beleaguered son.

Quotable: “Let me tell you something about sharing: don’t do it. Nothing good ever comes of sharing. Your mother and I shared a bed and nothing good came out of it.”

Why you should be glad he’s not your dad: Zero employment prospects, no paternal instincts, questionable hygiene, general distaste for his family and his role model is the title character in the television show “Psycho Dad.” This is no surprise, though, as Al Bundy was created as the anti-thesis of the wholesome sitcom family dynamic. He does, every once in a while, call his daughter by the pet name “Pumpkin.” Of course, it’s usually followed by the phrase “Go away,” but the attempt at affection has to count for something.

Likelihood for redemption: A decent chance. In the episode where Al’s beloved Dodge inexplicably goes in one end of a car wash but fails to come out of the other, Al frets over the valuables his trunk contains. When he eventually finds his car (which, thanks to all the dirt that had accumulated over the years, was a different colour than he remembered), he checks the trunk to see if his treasure is still intact. The priceless item? A family photo – a rare touch of familial sentiment followed by the on-screen caption, “For your Emmy consideration.”

Quotable: “A grown man made a wager, he lost. He made another one, he lost again. End of story. So take that high moral ground and go sleep in the bus station if you want!” – Tony to daughter Meadow

Why you should be glad he’s not your dad: Tony Soprano is a tricky one. Yes, he’s a murderer, a serial adulterer, a quick-tempered bully and so on. But that’s Tony the mob boss. Tony the family man is often quite brash with his kids, but he makes no secret that they’re the light of his life. He provides for their education and pampered lifestyle (albeit with blood money), saved his son from a botched suicide attempt and exacted violent revenge against a man who sexually harassed his daughter Meadow. Tony will never win father of the year, but his morals when it comes to honouring the family unit rise far above those he adopts at work.

Likelihood for redemption: It’s hard to separate the mob boss from the family man, but as a father no one can question Tony’s love for his children – even if he does unleash his legendary temper on them every so often.

TV Show: All in the Family

Quotable: “All kids are trouble, Edith. And I don’t wanna spend my reclining years trying to raise another one.”

Why you should be glad he’s not your dad: The racism, sexism, and prejudice are a good start. You wouldn’t inherit many brain cells from him either, so there doesn’t seem to be much of an upside. He nicknamed his wife “Dingbat” and his son-in-law “Meathead,” so by comparison the term “Little Girl” that he uses for his only daughter Gloria comes across as quite sweet. Of course, to be fair, this list is about good fathers, and by all accounts Archie always provided and cared for his beloved Gloria, even letting her and her left-leaning husband Mike live in his house. We’ll just try to forget about all the name-calling, bickering and insults that followed.

Likelihood for redemption: Deep down, Archie is a loving father with a soft spot for his little girl. It’s just every other facet of his life and attitude that needs improving.

Quotable: “If I had time to clean up the mess, I’d shoot you.”

Why you should be glad he’s not your dad: If you’re not a black liquid spewing from the ground, a green bill in his wallet or a blushing beauty looking for a good time, J.R. likely doesn’t have much patience for you. With two wives, three sons and the likelihood of extensive progeny from a string of extra-marital affairs, the Texas oil baron doesn’t fit the “Father of the Year” bill. Unless, of course, you eventually turn out to be just like him.

Likelihood for redemption: J.R.’s passion has always been wealth and women and we wouldn’t bet on that every changing.

Quotable: “The future of our family will be determined in these next few months. We could establish a dynasty that would last a thousand years … or we could collapse into nothing -”

Why you should be glad he’s not your dad: It’s not easy being a single dad when you’re busy battling enemies and ruling the land. One look at his family dynamic proves that point. Let’s just say that his first two children, Jaime and Cersei, are closer than any siblings ever should be (of course, it may be in their genes, as Tywin himself married his first cousin). Then there’s Tyrion, a dwarf, whose mother died giving birth to him. Tywin hates him, openly, on both accounts, and allows Cersei to share his opinion. Of all the fathers on this list, however, Tywin is the most likely to live to regret his sub-par parenting skills.

Likelihood for redemption: Very low. He’s less the “understanding, doting, help your kids with their homework” type and more the “vanquish his enemies at all costs” sort of dad. Quotable: “What you call love was invented by guys like me to sell nylons. You’re born alone and you die alone, and this world just drops a bunch of rules on top of you to make you forget those facts. But I never forget. I’m living like there’s no tomorrow because there isn’t one.”

Why you should be glad he’s not your dad: Maybe it’s not entirely Don’s fault. His father conceived him with a prostitute, who died giving birth to him. His father was killed when he was young, and he hated the rest of his remaining “family” so much that he switched identities with a deceased fellow soldier during battle in the Korean War. With a history of instability and heartbreak like that, his kids may find a way to forgive him. Of course, he went on to have an affair with his daughter’s elementary school teacher, giving a whole new meaning to parent-teacher night.

Likelihood for redemption: Despite his lies, drinking and rampant infidelity, Don does seem to genuinely want to do right by his children. It’s unclear how sleeping with their teachers fits into that equation, but if daughter Sally magically winds up with a full scholarship to med school, maybe he’ll find his approach to parenting redeemed.

Quotable: “Skyler, you are the love of my life, I hope you know that. Walter Jr., you’re my big man. There are … there are going to be some things, things that you’ll come to learn about me in the next few days. I just want you to know that, no matter how it may look, I only had you in my heart. Goodbye.”

Why you should be glad he’s not your dad: After being diagnosed with terminal cancer, this underpaid high school science teacher wants to leave his wife, his cerebral palsy-afflicted son Walter Jr. and daughter Holly with a full bank account when he’s gone. That’s commendable. He goes about doing so, however, by producing and dealing methamphetamine with the help of a former student. Though Walter’s cancer went into remission in season two, after season four he’s still neck deep in guns, gangs and drugs. In other words, hardly the type of dad you’ll find coaching his kid’s little league softball team.

Likelihood for redemption: Gets worse with each season. While his original intentions, if not his actions, seemed noble, it’s hard to overlook actions like murder or the fact that he missed his daughter’s birth to make a drug deal.