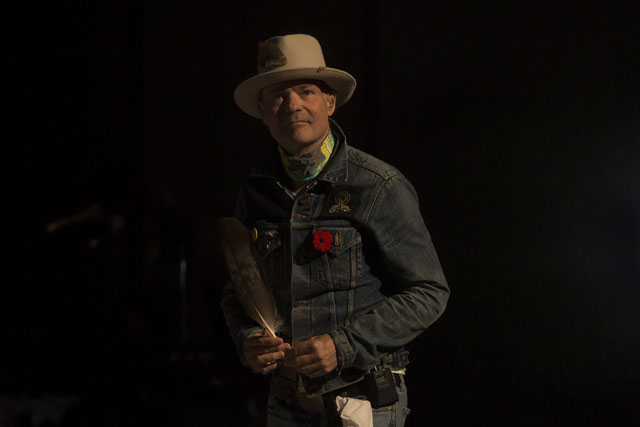 Gord Downie, who announced last year that he was diagnosed with terminal brain cancer, will be named a member of the Order of Canada today (June 19, 2017). A strong advocate for indigenous people and issues, his recent solo album and graphic novel “Secret Path” tells the story of an indigenous boy who died trying to escape a residential school.

“On the secret path. The one nobody knows. And I’m moving fast. On the path nobody knows…” — Gord Downie, “The Stranger”

There’s an irony in the fact that Gord Downie, frontman and lyricist for The Tragically Hip, a band that not only sang about locales from Newfoundland to Niagara Falls but in the process became entrenched in the mesh of Canadiana itself, never really thought of Canada as a nation. From childhood the country existed as a fractured land in his mind, a divide that Downie is using whatever time remains to attempt to mend. In order to heal, however, one must first acknowledge the wounds.

“We can think about how little we think about (Canada’s north), but it’s unbelievable,” Downie said in a recent interview with the CBC’s Peter Mansbridge. The singer, who was diagnosed with terminal brain cancer last year and who embarked on a national farewell tour with the Tragically Hip this past summer, has turned his artistic efforts to highlighting the abuse suffered by First Nations children and families in Northern Canada for more than a century, beginning in the 1880s. To illustrate the plight of these communities Downie focussed on one story in particular – that of Chanie “Charlie” Wenjack, a 12-year-old Ojibwe boy who ran away from a Kenora, Ont. residential school in 1966 in an attempt to find his way home. Not knowing his destination was 400 miles away, he died in sub-zero temperatures along the way.

In a CBC documentary about the story, as well as Downie and his new solo album, The Secret Path, dedicated to Wenjack’s tale, the singer said this campaign is, “the best thing I’ve ever done. And by best I just mean it helps my heart a little bit. This is what I want to do. Nothing else really matters to me … It’s an attempt to capture the feeling, somehow, of trying to get home.”

The album, released with a graphic novel about the 12-year-old by Downie and artist Jeff Lemire, led to two concerts in Ottawa and Toronto, the latter of which NOW magazine described as, “an excellent, excellent concert … a pointed appeal to Canadians to accept our sullied history for what it is, scrutinize why this information wasn’t disseminated the way it should’ve been and together try to make it right. We all (hopefully) left that room recognizing that a late first step is better than no step at all.”

The culmination of the project came last night, with an animated film detailing Wenjack’s journey and the perils of the residential schools that aired on CBC.

“We feel like this is something that needs to be brought forth in regards to awareness and education,” Saskatoon’s Treena Wynes, director of the Agency Chiefs Child and Family Services, said ahead of a viewing party for the film in her community — no doubt one of many similar gatherings held across the country. “I think we’re in a place in Canada where we no longer accept the distance of the two cultures. We’re now open to bridging the gap.”

Downie, for his part, points to Canada’s upcoming 150th birthday, suggesting to Mansbridge that the next century and a half is an opportunity for “building an actual nation.

“Imagine if [the First Nations communities] were a part of us, and we them – how incredibly cool it would make us. That’s what’s missing as we celebrate doughnuts and hockey over and over again.”

The singer, of course, faces his own difficult journey, a poet robbed of his memory by an incurable disease, using teleprompters to sing the songs he’s performed for decades, or writing the names of long-time friends on his hands in case he forgets them. He calls these effects of his disease, “the worst kind of punishment … one savage kick in the pants.” And yet, he continues moving forward. He, along with Chanie Wenjack’s sister, Pearl, established the Gord Downie and Chanie Wenjack Fund, which aims to “end the pattern of misunderstanding, betrayal and ignorance shown to First Peoples.”

In addition, a story in the Globe and Mail last week noted Downie plans to build a log cabin next to Pearl’s home in Ogoki Post, his brother Mike noting, “That’s where Gord wants to spend his last days, up there.”

“He was the right person to tell the story, because the Creator chose him,” Pearl said of Downie in the CBC documentary. “We didn’t. I didn’t. And I’m glad it was Gord. He will be forever remembered.”

For his part, Downie says he isn’t finished yet. He told Mansbridge that he’s in no pain and that he doesn’t see the end as being near just yet. Meanwhile, his humble, yet empowered, approach to his own journey ahead, Downie echoes the path to reconciliation and change he’s helped push an entire nation toward.

“It’s given me this long kind of way to do some of these things that I’ve always wanted to do. I’m grateful,” he said. “I’m resigned to the direction (his life) is heading because I can see it and feel it … creating something, an opportunity. And they just don’t come around too often.”