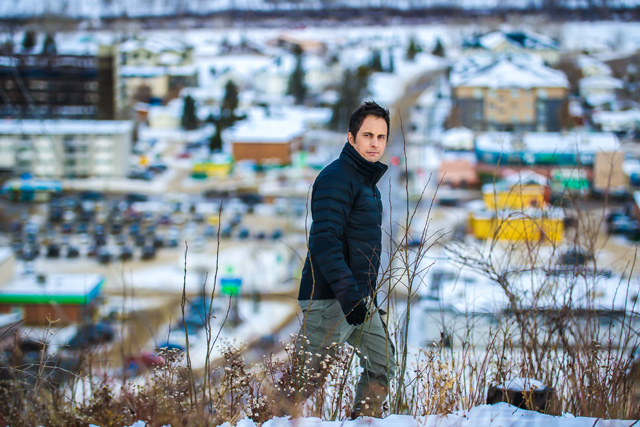 The town of Pouch Cove, Newfoundland and Labrador, boasts two major claims to fame. First, its north-eastern position on the Avalon Peninsula earned it the reputation as the first place to see the sun rise in North America each day. Second, it’s the hometown of Canadian comedian and actor Jonny Harris, 41, best known for starring roles on two CBC series’, playing Const. George Crabtree on Murdoch Mysteries and hosting the Canuck travel show Still Standing, which takes Harris from coast to coast to coast to explore and learn more about Canadian communities that have overcome great difficulties. In the season three premiere, which debuted this week, Harris visited Alberta’s Fort McMurray, still reeling after a massive wildfire ravaged the community last year.

“People are proud without being precious. And people are just sort of happy to have us there,” Harris, who couples a tour of each community with a stand-up comedy set tailored to their locale, says. “It’s a toast not a roast. And I think people appreciate that we’ve done our homework. I’ve had people come up to me after the show many times say, ‘Oh, you know I learned a couple of things about my own town I didn’t know before.'”

From Nazi U-Boat attacks on Canada’s east coast to Trekkies out west, the Pride of Pouch Cove has explored the stories behind it all and, in the spirit of Canada 150, he recently spoke to Zoomer about some of the most memorable Canadian locales he’s visited, and experiences he’s had, over three seasons of Still Standing.

MIKE CRISOLAGO: Going into the third season of Still Standing, why do you think the show has proven so popular in Canada?

JONNY HARRIS: I think it’s a number of reasons. First and foremost I hope that it’s funny. I also think that Canadians have a keen interest in Canada. I think it’s quite admirable that we live right next door to the country that makes the biggest and best and most polished and highly-produced television in the world but Canadians are still pretty eager for home-grown stuff and for Canadian stories. And you know, the show is looking for survival stories, which everybody enjoys. Everybody is rooting for the underdog.

MC: What’s your favourite part of traveling to these towns and being able to tell these stories?

JH: My favourite part of this job is probably uncovering some sort of ‘who knew?’ stories about small Canadian towns. We’ll tape Bell Island, which is a little island in Conception Bay in Newfoundland with some great history. I grew up not far from there and I didn’t know that during the Second World War a German Nazi U-boat sailed into Conception Harbour during two different attacks of four Allied iron ore freighters. And I went diving with a guy and [saw] this French freighter ripped in half by a torpedo. Lance Cove on Bell Island is the only community in North America to take torpedo damage from a Nazi U-boat during World War II and I didn’t know that until I went there. So little things like that I really love.

MC: What’s the most difficult part of the job?

JH: The hardest part about the job is writing the comedy. I’ve got a couple of guys that come with me and they help me write but sometimes you’re just staring at a blank screen on your laptop trying to think how to make something funny. But I find the more sensational the material is, it just sort of flows out of you. If it’s something you get excited about, passionate about, then it’s much easier to generate content about that.

MC: Does the humour help with the healing in these communities?

JH: I hope so, yeah. I think that was especially true in Fort McMurray. A lot of people came up to me after the show and said, ‘We needed that. This couldn’t have come at a better time. We really needed it.’ It is quite moving really to have people say that to you.

And on more of a generic note, I compare [the comedy] to if you had to give a speech at your buddy’s wedding. You might take a few shots at him, but all in all it’s a feel good show and you want to clap somebody on the back and congratulate them and pay them respect for what they’ve been through. So hopefully it comes across that way.

MC: Over these three seasons, are there certain moments or experiences on the show that stand out as favourites of yours?

JH: Certain things stand out. The Nazi U-boat dive was spectacular. Going to Buxton, Ont., which was a terminus in the Underground Railroad – it was a designated community for freed black slaves where they were given some land and could start farming and it’s still predominantly black farmers living there today. That was really remarkable.

In season three, there’s Tumbler Ridge, in British Columbia, which was a mining town. Now there have been all kinds of dinosaur fossil discoveries. And actually I saw in the news a couple of weeks ago that somebody’s just discovered a Tyrannosaurus Rex skull there.

There’s one in Vulcan, Alberta, which was a grain loading station, one of the biggest in the world. They had nine massive grain silos, grain elevators and now they’ve been reduced to one. So they decided to capitalize on their name, Vulcan, and there’s a crazy story about how they’ve tried to adopt this Trekkie sort of persona and their town hall is shaped like a spacecraft and they’ve built this ship that looks like the USS Enterprise. They actually got in trouble because at one point the guy who headed up this effort gets the fax from Gene Rodenberry himself saying, ‘Hey listen, this is all copyrighted stuff.’ But they’ve come to some sort of understanding now and there’s a great, really sort of authentic Trek memorabilia museum that you can go and visit.

It’s quite interesting these ways in which towns are reinventing themselves.

MC: What have you learned about Canada, or Canadians, from doing this series?

JH: There was a spirit of tenaciousness. I’ve spoke about that sort of humble pride of people being proud without being precious. City people should never think for a second that rural people are simple. It’s just inspiring to see the efforts that some people make.

A lot of these towns that I’ve been to, Mike, if they didn’t have this sort of pocket of eight or 10 or 12 people who just are on every committee and volunteer for everything and sort of give entirely of themselves, [they] would not exist. And every town’s got one. And that’s literally how they managed to survive. And I think that sort of selflessness in rural Canada is pretty impressive.