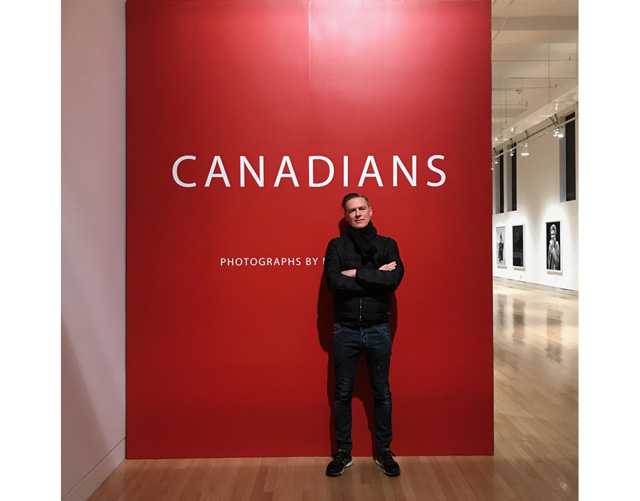 As it prepares to celebrate Canada’s 150th birthday, the country’s largest museum is bringing back one of its most buzz-worthy installations. This Canada Day weekend, Canadians, a curated portrait photography exhibition by legendary Canuck rocker Bryan Adams, returns to the Royal Ontario Museum. And on July 1st, admission is free.

The exhibition, which features Adams’ portraits of a roster of homegrown luminaries, from Wayne Gretzky to Joni Mitchell to Michael Bublé to Prime Minister Justin Trudeau and his wife Sophie Grégoire Trudeau – the latter two photographed this past April, backstage at the 2017 Juno Awards – was first unveiled in May at the inaugural ROM Ball, a gala fundraiser held in support of the museum.

Canadians opens to the public beginning Friday, June 30 as part of the museum’s Friday Night Live (#FNLROM) event and remains on display until Monday, July 3, serving as a cornerstone to ROM Canada 150 celebrations that also include exhibits, like Out of the Depths: The Blue Whale Story, and multiple Canada Day musical performances by the likes of fiddler Ashley MacIssac, the Toronto Chinese Orchestra and The Wexford Gleeks among others.

Room With A View. A section of Canadians , the stellar exhibition of portraits by @bryanadams shown at @romtoronto last night to raise funds for the museum. #aboutlastnight #romball #canada150 🇨🇦

The photographs from the Canadians exhibit are also available in a hardcover book by art publishing house Steidl at the ROM Boutique or at shop.rom.on.ca. In the book, Arlene Gehmacher, PhD, the museum’s Curator of Canadian Paintings, Prints and Drawings, Department of World Cultures, wrote of Adams’ exhibition:

Bryan Adams’ photographic grouping of iconic Canadians presented in this book boldly recognizes the significance of cultural initiatives in articulating national identity and the diversities that shape it. From the long-venerated to relative newcomers, the musicians, actors, authors, sports star and models, among others, together offer a spectrum of creative people and pursuits that remind us of their extensive reach both within and beyond Canada’s borders. As such, they are our nation’s true cultural attachés.

Adams’ photographs of these fellow Canadians can be understood as distillations of a creative process born as much of the dynamic between photographer and subject as of the post-shoot production of the photograph. While some seem straightforward, others are engagingly fun (cheeky, even), at times sporting an air of spontaneity. There is an ease about them, a casual intimacy that sometimes ventures into irony. How else to explain the image of a head and torso wrapped in diaphanous linen? Author Margaret Atwood, internationally renowned, becomes, at least in the context of this grouping, “every Canadian.” They often seem to confirm Canadians’ reputation for lack of self-importance and even comic self-deprecation.

Given Adams’ artistry and playful, ironic photographic/curatorial eye, it is perhaps not surprising that in portraying himself amidst this group of iconic Canadians, he – himself such a icon – would choose to turn his back to the camera (and viewer). Head barely turned, just enough to reveal his identity, he encourages us to join him on this celebratory journey by viewing these Canadians through his eyes.

It is with the pleasure of edgy insight that we appreciate Bryan Adams’ photographs of famous cultural Canadians as ROM Ball toasts Canada, 150 years young.