Gordon Pinsent Talks “The River of My Dreams” Doc, Which Debuts on Canada Day 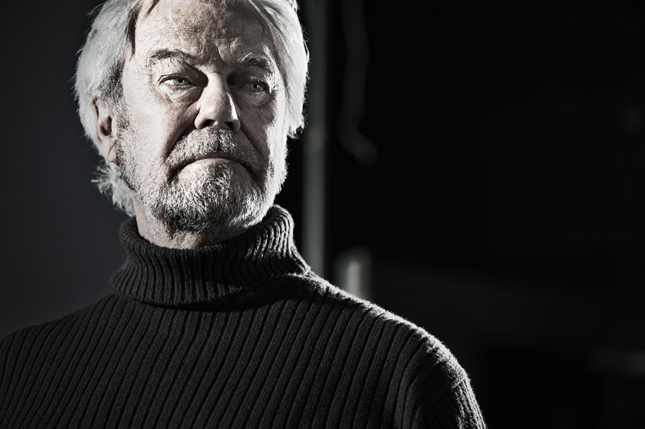 The famed Canadian actor reflects on life, loss, legacy and the love of his mother in a documentary by Oscar-winning director Brigitte Berman, which makes its world broadcast premiere on documentary Channel on Canada Day, followed by a CBC airing on July 2. The following interview with Pinsent about the film originally ran ahead of its Toronto International Film Festival debut in September, 2016.

Gordon Pinsent’s smile is unmistakable, even when viewed through a partially open hotel door at the end of a long hallway. Far from the Toronto International Film Festival red carpets and celebrity soirées, these non-descript and carefully secured hotel hallways are the TIFF trenches, where behind each door an award-winning actress or celebrated director sits before a rotating roster of journalists.

There’s something about Pinsent’s enthusiasm, though, when his eyes widen and he calls out to me and another journalist through the door – “Hi guys!” – waving like a school boy to his pals who’ve arrived to see if he can come out and play. Instead I head in, joining the 86-year-old near a window overlooking downtown Toronto. Pinsent’s energy is palpable if not, perhaps, muted slightly by the fact that we’re there to talk all about him and his life, the subject of the documentary The River of My Dreams: A Portrait of Gordon Pinsent, by Oscar-winning director Brigitte Berman. He jokes about how the documentary’s use of stop motion animation, which illustrates many of the stories of Pinsent’s life, helped ease the awkwardness of talking about himself for so long.

And, at 86, with a career that spans more than six decades and includes roles ranging from 1974’s The Rowdyman, which he wrote, about a 30-something Newfoundlander who can’t seem to take life seriously, to the 2006 Sarah Polley film Away From Her, where he plays a man losing his wife to Alzheimer’s, there’s lots of ground to cover. Of course, as Pinsent is quick to point out, there are the less glamorous moments as well.

“I went to Loblaws yesterday and an old gentleman came up and said, ‘Oh, it’s you! You’re one of the original Canadian actors,'” Pinsent laughs. “I said, ‘Well I didn’t go to auditions with John A. MacDonald!’ Original Canadian actors! Me and a couple of old cavemen. Makes you want to sit down.”

Pinsent is surely the only celebrity in the hotel with an anecdote about shopping at Loblaws. But for all the quips he also exhibits a profound sense of regret, which is revealed in the documentary. At the beginning of the film Pinsent says of his mother Florence, known as a quiet, loving woman, “I believe her silence gave me my voice.” It’s a revelation that freed him to pursue a lifetime of adventures which, in hindsight, came at a cost.

“My mother was the sweetest, wonderful woman…and I was trying to catch up to Frank Sinatra and trying to do things that were slightly different than the life that had been lived by my father and mother at an earlier time,” Pinsent explains, recalling how, as a teen, inspired by the matinee idols that captivated him at the local cinema, he left his hometown of Grand Falls, Newfoundland, to chase his acting dream. “After all of this time, I remember more than anyone, every pore in that woman’s skin, everything about that woman [who] simply walked through her life catering, pandering, to her children.”

Pinsent’s eyes turn serious, his gaze lowered to the floor. “Her idea of crying, as family were leaving her, was simply that her nose would turn red. And when I left, I was the last to leave, I said goodbye to her, and she said, ‘You’re sure you have to go?’ And her nose turned red. And I’ll never forget that. I was fairly selfish as a kid. I wanted to grow. Many times I would think of her. I wanted to go away and do something for her as well. Unfortunately, when I finally got back, she had lost her memory.”

For Pinsent, however, there are also those realizations that come with age, accessible only through deep reflection on the past or, in his case, by watching your life pass before your eyes through the lens of a seasoned filmmaker.

“I was really so entrenched in that idea that I’m perfectly within my right to take this business that I’m in, go with it for all that it’s worth and make something of myself and all that will pan out, and nobody’s going to die. They’ll all stay until it’s done. Well, they didn’t, of course. You begin to realize how much more you’d liked to have included.

“But I can’t back up. The only thing I can believe is that when you have regrets like that, and you remember them, the regret may come back but you don’t have to bring the pain of it back with you. You’ve done that. That pain is spent now. And I think I can forgive all of that stuff and continue to grow if I have any time left.”

Pinsent lets loose a short chuckle at that last sentence, though it’s at the mention of fellow Canadian acting legend Christopher Plummer that his eager, boyish laugh echoes throughout the hotel room. In the documentary Plummer recalls how he disliked Pinsent’s constant prodding for attention when he showed up as an unknown extra at the Stratford Festival in the 1950s, where Plummer was already a star. Pinsent, in the film, jokes that the future Oscar-winner had two words for him. The first was obscured by the sound of birds chirping but the second was “off.” But with Plummer announced as presenting Pinsent with Stratford Festival’s Legacy Award on Sept. 26 (2016), the Plummer story adds a healthy layer of irony to the honour.

We exchange one last laugh about the Plummer irony. “All of that,” he smiles, “is fantastic.”

The River of My Dreams: A Portrait of Gordon Pinsent makes its world broadcast premiere on Saturday, July 1 at 8 p.m. ET on documentary Channel, followed by an airing on Sunday, July 2 at 1 p.m. on CBC. Click here for more information about the film and repeat airings.