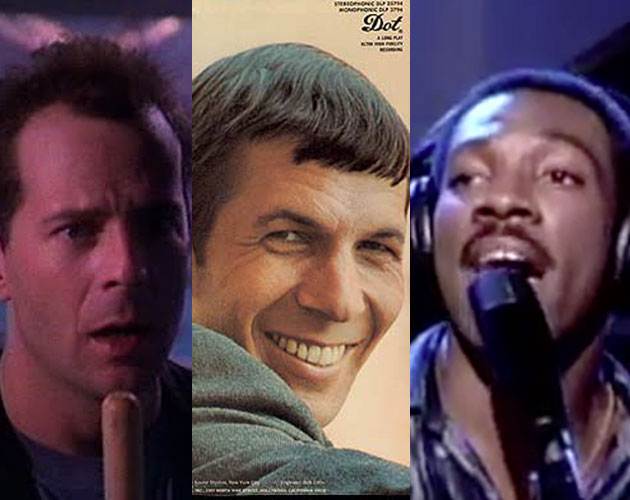 For many actors, a music career might seem like the next logical step—another artistic challenge to conquer while still at the height of their popularity. For others, it might be a return to their original passion.

But for a few particularly misguided individuals, it’s a complete and utter mistake.

Fortunately, Hollywood is a (mostly) forgiving place where those failed attempts at singing careers often sink to the depths of otherwise robust film resumes—never to be heard from or seen again.

That is…until someone digs them back up. Thank goodness for the vast archival system that is the Internet, right?

Here, 9 actor you won’t believe once had music careers.

It turns out there’s more to Clint Eastwood’s early career than a handful of spaghetti westerns and the Dirty Harry franchise. After breaking onto the scene in his first television series, Rawhide, Eastwood decided to try his hand at a singing career with the release of his first single, “Unknown Girl,” in 1961.

While his recognizable rasp would prevent him from belting out any new songs today, his musical talents have been proven in other ways. A talented pianist and composer, Eastwood has created the original scores for several of his own directorial efforts, including Oscar-winner Million Dollar Baby and Hereafter.

In 1987, following the critical and commercial success of his TV series Moonlighting, Bruce Willis released his debut album, The Return of Bruno.

To promote the release, a fictional documentary of the same name aired on HBO starring Willis as his musically inclined alter ego, Bruno Radolini. His first single off the album, “Respect Yourself,” featured the Pointer Sisters and managed to climb to No. 5 on the U.S. Billboard Hot 100 Chart.

The following year, Willis relegated Bruno to the background for the sake of his (now iconic) role as the gritty detective John McClane in the first Die Hard film. But by 1989, following the international success of the film, “Bruno” returned with the release of his second album, If It Don’t Kill You, It Just Makes You Stronger. The album landed in stores with a thud and proved to be Willis’ last album release.

There’s more to Steven Seagal than his black belt in Akido: The action hero has tried his hand at a variety of careers—from aromatherapy to law enforcement. As it turns out, he’s also used that silky smooth voice for more than just cringe-worthy one-liners. After featuring his own songs in several of his movies, Seagal released his first album, Songs from the Crystal Cave, in 2004.

Apparently, Seagal wasn’t ridiculed enough the first time around—he made a second effort to kickstart a music career two years later with Mojo Priest. Needless to say, it didn’t turn out too well for Mr. Seagal.

In 1978, while starring in the hit TV series Wonder Woman, Lynda Carter released her debut album, Portraits, on which she co-wrote three out of the 10 featured songs.

Her lifelong passion for making music cropped up once again nearly three decades later when she released her second album, At Last in 2009. The LP included covers of Sam Cooke’s “You Send Me” and James Taylor’s “Secret of Life.”

More recently, Carter wrote and recorded five original songs for the character Magnolia who is featured in a 2015 video game called Fallout 4. “I was trying to give a different flavour to each of the songs, because there really is no genre except for how Magnolia sings them,” Carter told Polygon. “She is the genre and her personality is reflected in every song.”

With the help of Rick James, Eddie Murphy released his hit single “Party All the Time” which climbed to No. 2 on the Billboard Hot 100 Chart in 1985.

However, music had been an essential part of Murphy’s life long before his success as a standup comedian. His first experience with music came in high school when he and fellow comedian, Mitchell Keiser, formed a band called EMMK—the Eddie Murphy Mitchell Keiser Band. Putting their impersonation talents to use, they covered everything from The Beatles to The Commodores.

Murphy’s most recent appearance on the music scene came in 2013 when he released a reggae single with a “Bob Marley feel” called, “Red Light,” which features Snoop Dogg—or Snoop Lion, as he preferred to be called back then.

While his most recent attempt garnered only limited success, the retired comedian seems to enjoy the process more than the accolades.

“I do music all the time. Just when I’m around the house, I have my guitar and stuff with me all the time. I don’t do jokes all the time,” Murphy told Billboard in 2013. “It’s like one thing is constant, and the other is something I make money for doing. I love to make people laugh. But even if I was dead broke, I would play my guitar, but I would not be writing jokes.”

The Miami Vice star released two albums in the 1980s and even scored a major hit with the single “Heartbeat” which climbed to No. 5 in the U.S. on the Billboard Hot 100 Chart.

Like many other actors, his foray into music wasn’t completely foreign. At 16, Johnson was signed as an artist by Quincy Jones. “Had I chosen that path, I think I would have had some success in that area,” Johnson told Rolling Stone. Although he ultimately only released two albums, Heartbeat and Let It Roll, his other singles had some modest success overseas.

Before making his jump from barber to actor, Joe Pesci attempted to launch a career as a musician. Perhaps it was his friendship with Frankie Valli of The Four Seasons, but Pesci started out playing guitar for several bands, including Joey Dee and the Starlighters, the group who later gave Jimmy Hendrix the same lead guitar gig.

In 1968, using the stage name Little Joe, Pesci released his debut solo cover album, Little Joe Sure Can Sing!—you know, just in case there was ever any doubt.

Pesci wasn’t finished, either. After years of acting, he decided to make his musical return in 1998, singing as his lounge singer character from My Cousin Vinny in his second studio album, Vincent LaGuardia Gambini Sings Just for You.

In 1967, capitalizing on the immense success of Star Trek, Leonard Nimoy released his first studio album—as the character Spock.

Leonard Nimoy Presents Mr. Spock’s Music From Outer Space was something of a cult hit and was immediately followed by Two Sides of Leonard Nimoy in which the actor introduced listeners to the real Leonard Nimoy, singing side B as himself.

As it turned out, audiences preferred the real Leonard Nimoy when it came to singing.”The Ballad of Bilbo Baggins,” featured on side B of Two Sides, remains Nimoy’s most popular song, by far. He went on to release three more albums with limited success.

While playing the title role on TV’s I Dream of Jeannie, Barbara Eden released her first and only pop album, Miss Barbara Eden, in 1967 during the height of her fame.

While the album relied heavily on the popularity of her hit show, Eden’s interest in music started long before her acting career. She once studied at the prestigious San Francisco Conservatory of Music and managed to score a starring role in the national touring production of The Sound of Music in 1965 before she turned to acting.

Later, Eden toured with Bob Hope to entertain troops in the Middle East and sang “Have Yourself a Merry Little Christmas” at the White House tree-lighting in 2002.