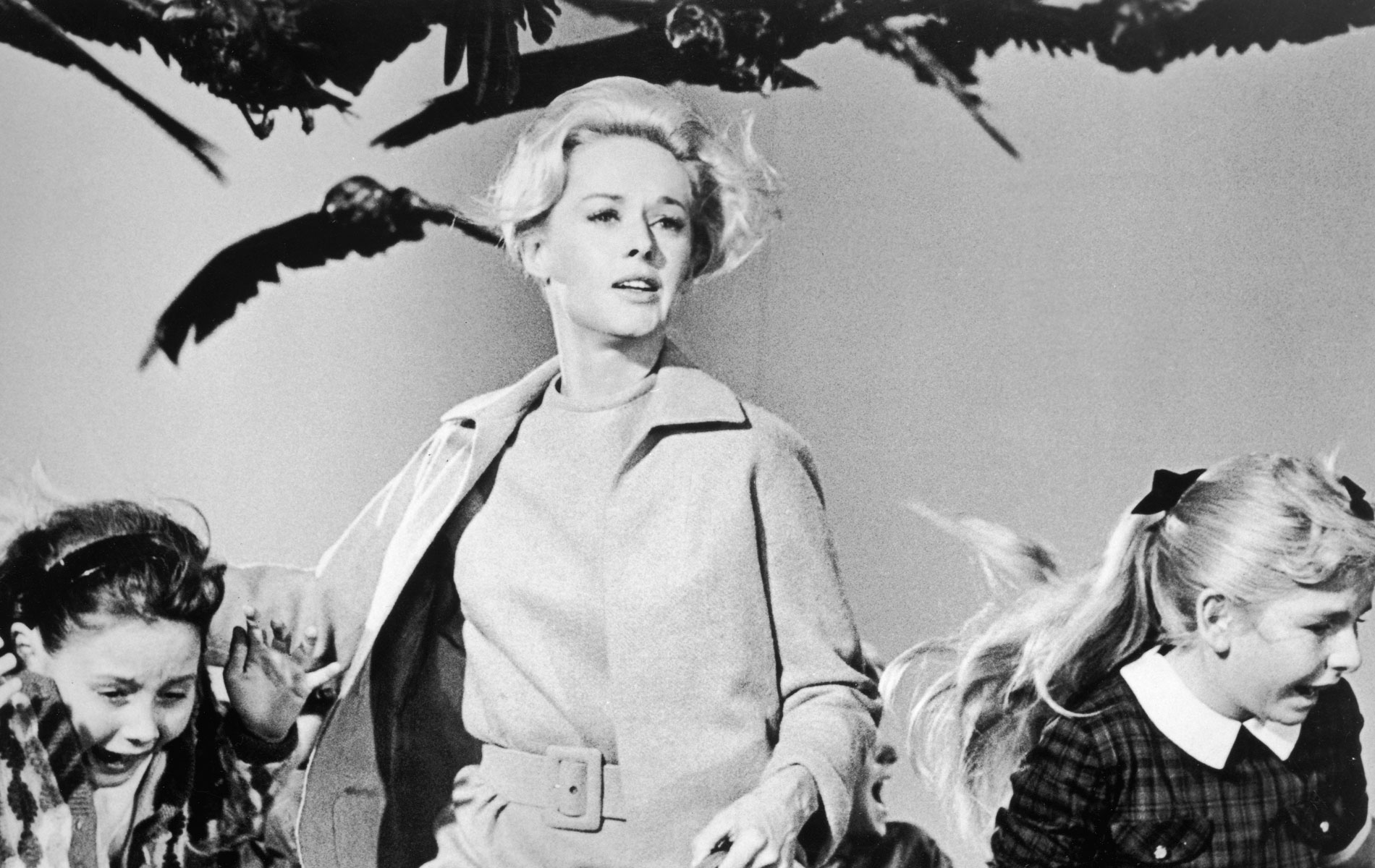 As Tippi Hedren celebrates her 90th birthday, we revisit our 2018 interview with The Birds star, where she discussed fame, Alfred Hitchcock and animal activism.

The birds are flying over Tippi Hedren’s head—again. Ravens, to be more specific.

The screen siren giggles as she describes the scene at The Shambala Preserve, the animal sanctuary in Acton, California which Hedren calls home. “The animals are being fed right now,” she observes over the phone as she looks out the floor-to-ceiling window that overlooks the sanctuary. “I wish you could see the flock of ravens that are flying around my house right now. They are swooping down to steal the meat from the lions and tigers. Oh! They’re flying over my house now!”

At this point, Hedren breaks into a fit of laughter. “It’s really funny to see. I guess I just have a weird sense of humour.” Hedren has a lot to smile about these days. From the cathartic release of her memoir, Tippi (in which she details the sexual assault she suffered at the hands of director Alfred Hitchcock — her own #MeToo experience that occurred decades before the movement began) to her ongoing animal activism, Hedren is enjoying the time spent out of the limelight and surrounded by her beloved lions and tigers.

Yes, the Hollywood icon lives a quiet life with some of the world’s most dangerous animals in order to provide them with a sanctuary in which they can recover from years of neglect and abuse at the hands of former owners. Hedren also lends her support to The Roar Foundation‘s mission to deter people from buying, selling or breeding exotic felines. Even the proceeds from her memoir go directly to the foundation. “[Shambala] is a beautiful place and the animals have a huge space to live; they’re not in little cages,” she says.

It was after she skyrocketed to fame with starring roles in The Birds (1963) and Marnie (1964)— two back-to-back Hitchcock masterpieces—that Hedren narrowed her sights on the plight of lions after a life-altering experience filming 1969’s Satan’s Harvest in Africa. Hedren and then-husband, Hollywood agent Noel Marshall, watched as a pride of lions took over an abandoned house and were immediately inspired to make a film about a family who are attacked by various jungle animals. The resulting movie, 1981’s Roar, (likened to a sort of “Jaws of the Jungle” by critics) was both a box office and financial failure—yet it remains the one film on Hedren’s filmography of which she is most proud. “I look at that movie now and I’m simply grateful we survived,” she says.

Hedren spent 11 years bringing Roar to the screen. The film, considered one of the most dangerous movies ever made, became notorious for the amount of life-threatening injuries endured by the cast and crew during production, including Hedren (who sustained a gash to the throat) and her then-teenage daughter, Melanie Griffith, who suffered numerous injuries. But ask Hedren about the film today and she says she wouldn’t change a thing. “It served its purpose,” she says matter-of-factly.

Forget the glamour of Hollywood, the award shows and the tabloid gossip: All things considered, Hedren sees herself, first and foremost, as an activist.

LAURA GRANDE: Your memoir, Tippi, came out in late 2016. What was it that finally inspired you to share your story?
TIPPI HEDREN: It took a long time for me to live my life. [laughs] I had to live it before I could write about it and I think I’ve had an amazing life and thought I ought to share it.

LG: What was your favourite part of the writing process?
TH: All of it. I’ve done a lot in my life and each part of it was exciting to write: some of it tragic, some of it exciting, some of it powerful. I’m a very lucky woman.

LG: You dedicate a significant portion of your book to your experiences with Hitchcock in which you reveal that he stalked you and attempted to blackmail you for sex. Did you get a sense of satisfaction in finally putting the truth down in writing?
TH: Well, I think all women should have that sense of control over their lives, especially if they have to put up with that kind of force.

LG: It must have come as quite a shock to you when his wife, Alma, implied that she was aware of her husband’s actions.
TH: Well, that was a real sadness to me that she had to put up with that and live with it.

LG: How did you react to news of Hitchcock’s death?
TH: Well, everybody’s got to go sometime, right?

LG: After everything you went through with Hitchcock, you still attended his funeral and even privately thanked him. What ultimately helped you come to that place of healing and forgiveness?
TH: There isn’t just one side to any person. He gave me a great opportunity to have a career that was absolutely wonderful and I’m very grateful for that. I’m able to compartmentalize.

LG: Sexism in Hollywood seems to be one of the industries greatest perils. Do you think it has changed at all since the early days of your career?
TH: It’s legion in any phase of life, not just in motion pictures. But I don’t know, I’m not a young woman anymore. [laughs]

LG: Acting has become something of a family tradition. When you realized that your daughter Melanie Griffith and granddaughter Dakota Johnson were following in your footsteps, did you worry about the sexism they would face?
TH: I think they learned a great deal from my experiences and they’re very strong women. I never heard of any problems from them.

LG: After filming a couple of movies in Africa you got heavily involved in animal activism, specifically the plight of African lions. And you dedicate a large portion of your memoir to the difficult filming of Roar. Would you have done anything differently if you were making Roar today?
TH: I don’t think so. I think we have created a great deal of awareness about animals in the wild and the problems they have out there due to encroaching civilization with sport hunting and poaching. We continue to make people aware and I will continue to do so as long as I have a place on this earth. I have The Shambala Preserve where we take in animals that have been abused and abandoned and I was able to get a federal bill passed to stop the breeding and selling of big cats to be sold as pets or financial gain and that has been very successful. I’m very proud. It has been proven successful by the lack of animals being born to be sold for financial gain.

LG: You filmed some incredibly intense sequences for the movie. If working in close proximity with lions and tigers doesn’t scare you, what does?
TH: Not much, not much. [laughs] But if something does, I just stay away from it. It’s important to learn something from your experiences.

LG: You ultimately spent 11 years bringing the movie to the screen and one critic likened it to a sort of ‘Jaws of the Jungle.’ How do you feel now, looking back at Roar?
TH: It served its purpose. I look at the movie now and I’m simply grateful that we survived.

LG: Proceeds from your memoir go towards The Roar Foundation. As president of the foundation can you tell us a bit about your day-to-day duties on The Shambala Preserve?
TH: Well, I live here. We give a home to these abandoned animals. It’s a beautiful place and the animals have a huge space to live, they’re not in little cages. We give them a very, very good life. The bill has worked and we’ve found that there are fewer animals being born now to be sold as pets. We serve beef to the animals and, of course, ravens love beef so this huge flock live here and they wait for the time when the animals are fed. They follow the meat. [laughs]

LG: You’re referred to as a Hollywood icon. How does that feel?
TH: I think it’s absolutely fabulous. Wouldn’t you like to be called an icon? It’s nice, I love it! You have to work hard to become an icon, yes you do. You have to do a whole bunch of crazy things to become an icon. [laughs]

LG: What do you hope readers will take away from your memoir?
TH: To take advantage of what life offers you, as long as you’re not hurting anybody or anything—animal or human. To keep your mind open to new ideas and experiences because it will give you a good life—an exciting one.