Reliving The ’70s With The CBC’s New Comedy ‘Terrific Women’ 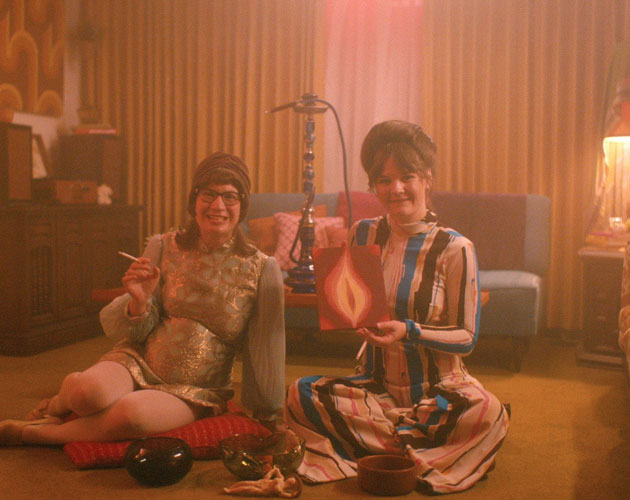 Making its debut this month on CBC is Terrific Women, a new comedy that will bring back all that you love and loath from the 70s.

It’s okay to make fun of the 70s if it’s the decade, not the age demographic.

And Sara Hennessy and Stephanie Kaliner of Terrific Women — a new CBC original comedy that is streaming at cbc.ca/watch — make their send-up of the 1970s fun for everyone, whether or not you were there, in your bell bottoms and shag hairdo.

It was somewhere in the middle of that decade that I went on a solo trip and came home to find that my husband (now ex) had done up our den in thick green shag wall-to-wall carpeting and grasscloth wallpaper. It was enough to send me right to the medicine cabinet for the Valium — a ’70s staple that takes its rightful place in Terrific Women. It shows up first as an ingredient in a cocktail devised by the women’s personal bartender and pool boy, the over-the-top flamboyant Alejandro.

The terrific ladies of Terrific Women get all that just right in their show beginning this month.

There’s also enough contemporary references slipped into the mix to make it entertaining for all those fortunate enough to miss the ’70s — by which I mean people who weren’t around for them because nobody actually misses the decade although there were events to recall with fondness, like the opening of the CN Tower in 1976 and the Blue Jays inaugural season a year later.

One of my favourite lines from the opening episode is when Steph talks about “stress gardening.”

Another episode parodies current dating reality shows by bringing in three men who might be the father of Steph’s unborn child; she’s perpetually eight months pregnant but can’t identify the father. One of the men is her identical twin brother, supposedly there to be supportive.

Their show is set-up like a cable community access show produced from their basement rec room, backyard or living room. Sara explains in the first episode that in her divorce settlement, her ex got the kids and she got the time slot.

Terrific Women got its start as a stand-up comedy routine by fast friends Sara, who is 33, and Steph, 30, who in real life sound just like their characters.

“We make each other laugh, listen to each other’s problems, inspire each other comedically,” says Sara. “We truly are good friends and every summer we go to Canada’s Wonderland together”

“Our characters are caricatures of our personalities,” she explains. “It’s our real dynamic in a lot of ways.”

Their inspiration for the show, says Sara, was “the goofy and fun outfits of the ’70s — the polyester, pointed collars, wide bottom pants and colour schemes, like avocado green, brown and orange.

The pair watched a lot of ’70s TV specials and Donny and Marie shows.

Explains Steph, “There’s something funny (about the ’70s) in the contrast of everything being free and liberated but the style is still so innocent and sweet.”

Even the vocabulary reflects this, she says, with people saying “golly, gee and terrific.”

The current Terrific Women series has nine episodes and the ladies say they’d have no problem coming up with material for more shows. “We would love to do a season two,” says Sara, “and a 1975 Christmas special would be hilarious.”

Andrew Rosen, executive producer of Aircraft Pictures which produced Terrific Women, says he was interested in taking on the show “for three reasons: Stephanie Kaliner, Sara Hennessey and the misguided nostalgia for the 1970’s. We like to work with great talent, who are genuine, collaborative and nice people, and we had that with both Steph and Sara — they’re hilarious, to boot.”

“As for the 1970’s, I’m a child of that era, and wanted to see it represented with as much shag carpet as I had to rake in my bedroom growing up. I was the oldest person on set (and I’m “only” 45 years old!), and I had to convince the cast and crew that all the set dec, wardrobe and food styling were actually extremely accurate to the time —or at least my memory of the 1970’s.”