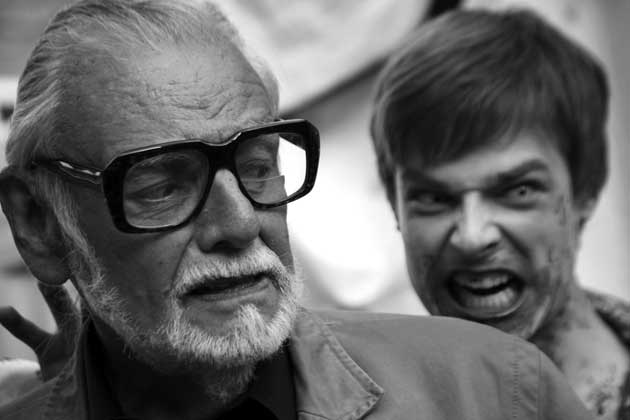 Movie director George Romero, father of the zombie movies and resident of Toronto, has died from lung cancer at the age of 77, one year before the 50th anniversary of his iconic movie, “Night of the Living Dead.”

He died in his sleep with his wife Suzanne and daughter Tina nearby.

George and Suzanne were good neighbours in our condo building and besides seeing them in the hallway and on the elevator, I sat down with George four years ago to talk about his work and then talked to a few other people about him and his work.

What became clear was the stature of this gentle, modest man and how his legacy would live on.

Here is what I wrote about him for Zoomer magazine in October 2013:

The Godfather of the Zombie flick, George A. Romero talks with Judy Gerstel about his (undead) legacy

“I used to be the only guy in this playground,” says George A. Romero, the legendary filmmaker. The playground he’s referring to? The Zeitgeist’s current obsession with the undead – or zombie, if you prefer. To wit, AMC’s hit television series The Walking Dead, about to enter its fourth season, and reportedly the highest rated show on television among 18- to 49-year-olds. Then one of this past summer’s few real breakout “monster” hits was World War Z, the Brad Pitt vehicle (he also produced) about a global zombie apocalypse based on the best-selling novel by Max Brooks (son of Mel Brooks and Anne Bancroft).

But it is Romero alone who can claim to have started the trend when his first feature film Night of the Living Dead was released 45 years ago this month. Romero’s real world, the one he lives in outside his imagination, is centred in a two-storey Toronto condo near St. Lawrence Market and the Distillery District, which he shares with his third wife, Suzanne Desrocher, three birds and a cat.

He first came to Toronto to make the horror flick, Bruiser, funded by Canal Plus, at the end of the ’90s and made the city his home. But few of Romero’s neighbours realize their condo building is Zombie Central. For it’s here that the 73-year-old is working on a series of zombie comic books for Marvel and also adapting the book The Zombie Autopsies for the screen. The author of the novel is medical doctor and Harvard psychiatrist Steven Schlozman, who says, “George is completely lovable – a real mentor and father figure.”

And a cult figure as well for those who have taken up the zombie genre. “When it comes to zombies,” Max Brooks has said, “it’s George’s world, and the rest of us are just lucky to live in it.”

Before Romero, the scary creatures that populated monster films were either Gothic literary creations such as Frankenstein or Dracula or often radiation-empowered insects run amok courtesy of the cold-war paranoia of the ’50s and ’60s. Then came aliens.

But zombies aren’t just another nasty species or hostile visitor from space. Nor are they some dangerous monster created by humans inadvertently or on purpose. They are us and we are them – reanimated corpses that come in hordes, eat away at us and turn us into the undead, aiming to destroy the human race.

This idea of the enemy within and the breakdown of society was a perfect fit for the 1960s when Romero made his first zombie movie. Now, with the widespread fear of terrorists among us, of plagues arriving with people from foreign places, with medical science prolonging the life of the living dead and dementia eating away at people’s brains, with nuclear apocalypse a real fear because human beings are at each other’s throats, with members of the boomer generation pondering their approaching demise, it’s no wonder zombies are back in vogue.

And as is often the case, when a cultural phenomenon gets rediscovered, there is a rush to look at its history and origins. Today’s zombie craze means that Romero is having another moment. He was asked by The Walking Dead’s creator Frank Darabont to direct a few episodes of the series, but Romero declined. There’s even an academic paper titled “A Modern Meditation on Death: Identifying Buddhist Teachings in George A. Romero’s Night of the Living Dead.” For his part, the famously modest Romero gently declines the accolades of scholarly analysis.

“I think they are over-analyzed,” he says about his movies. He points out that he never set out, in the late ’60s, to make a movie about modern zombies, let alone invent a genre. Night of the Living Dead doesn’t even mention zombies. The undead are merely ghouls. What may come as a shock to his legions of zombie-obsessed fans is that Romero says he’s not all that interested in them. It’s living human beings that fascinate him.

“The first film was a fluke,” he says. “Only with the second film did I realize I could use zombies to say whatever I wanted politically, the idea that people just can’t get along and that I could have some fun at the same time.”

In other words, for Romero, the undead are not a metaphor.

“Mine come from above,” he explains. “They are strictly from ‘when there’s no room in hell … the dead will walk the earth.’ I don’t think of them as anything more than an annoyance. The zombies could be a tornado or a plague. They’re just something I use to create chaos in my stories so that I can examine human behaviours in the face of chaos.”

He’s not terribly impressed with human behaviour. In fact, it’s humans that he fears most. “I went through the George Bush years saying I was afraid of Rumsfeld.” Asked what he’s afraid of now, he answers, “Egypt.”

“I don’t get afraid of anything supernatural. I’d love to see a UFO. I’d be the first one on board. What bothers me is people’s cruelty against each other.”

Both Schlozman and Brooks, who sat on a panel about zombies with Romero at the Denver Film Festival, have taken up Romero’s point about humans being the scariest creatures. “We screw it up, we turn on each other,” says Schlozman. “That’s what interests me because I’m a shrink: how we misbehave when we’re frightened.”

Brooks is quoted as saying about zombie versus humans: “They don’t win. We lose.”

But Romero admits that the zombies he created are indeed monsters that have taken over his life. “I wish that I wasn’t in this horror niche,” he says. “But that’s all anybody wants me to do. I wish I could do other kinds of things more readily.”

His non-zombie movies, including Martin (about vampires) and Bruiser have not done as well at the box office, though Martin was acclaimed critically. He says he’s working on a novel on and off that’s not about zombies but can’t always take time for it because he has to keep earning money. And he mentions that he has “a script out there for a TV series that’s not about zombies. But it is scary. We have a producer who’s interested.”

Says Schlozman, “I do know that his talents go way beyond what one could do with zombies.”

Romero strongly believes that creativity doesn’t diminish as people age. He quotes his good friend, Guillermo del Toro, director of Pacific Rim, who has also become a Toronto resident living in Romero’s neighbourhood, about creativity. “Guillermo says, ‘Sometimes I become a 12-year-old.’ Some of my ideas are like that, too.” Still, he admits, “It’s hard to get back to that innocence. I’ve been through the mill too many times. I know what the executives are going to think and say. I used to just write something. Now, I’m too aware. And I don’t want to waste time. In that sense, I’m more cautious, I think, and that can get in the way.”

As far as aging, he says, “You can’t ignore the aches and pains, the diminished energy. All those annoyances that get in the way.” Which is exactly how he’s defined his zombies.