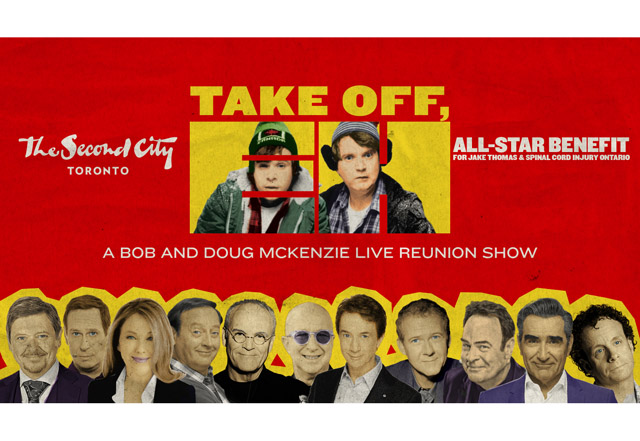 The 68-year-old Canadian comedy legend muses about house parties and road trips with his famous friends and the all-star benefit show for his nephew, Jake Thomas.

“This is going to be [like] an evening at Marty Short’s house,” Dave Thomas quips when discussing the upcoming all-star comedy show Take Off, Eh!, immediately conjuring images of Short prancing across the living room as Ed Grimley while Bob and Doug McKenzie enjoy a brew on the couch surrounded by other SCTV alumni. And, as it turns out, that’s not that far off from reality.

Take Off, Eh!, a benefit fundraiser for Spinal Cord Injury Ontario and Jake Thomas, Dave’s nephew who was left paralysed from the waist down after a snowmobiling accident earlier this year, boasts a roster of performers that reads like a who’s who of Canadian comedy: Martin Short, Dan Aykroyd, Eugene Levy, Catherine O’Hara, Joe Flaherty, members of The Kids in the Hall and Dave Thomas reuniting with Rick Moranis (who largely retired from acting in the late 1990s to focus on raising his kids after the passing of his wife) as Bob and Doug McKenzie. As well, Paul Shaffer, Murray McLauchlan and Ian Thomas serve as special musical guests.

“It’s very humbling,” Thomas says of the support he received from his famous friends for this event. “Marty was the one who suggested it, Rick Moranis said, ‘Of course I’ll do this and I’ll even put on the toque and parka,’ which is not something he wanted to do, and I took him up on that. I got an email from Dan Aykroyd and it says, ‘We’ll be at your side for the duration of the event and beyond.’ I feel very, very fortunate to have a group of people like this as my friends.”

Of course, Thomas wishes the need for such a benefit didn’t exist, noting the “very personal and very difficult” journey his loved ones have endured. But it’s at difficult times like this that one turns to their friends for support. For Thomas, the people he’ll share the stage with for Take Off, Eh! are some of the oldest, best friends he’s got. Over the half hour that we spoke the 68-year-old recalled UFO road trips across Texas with Dan Aykroyd, the enduring legacy of Bob and Doug McKenzie and, yes, what went on at those parties at Marty’s house.

MIKE CRISOLAGO: How does it feel to reunite with Rick Moranis to perform as Bob and Doug McKenzie?

DAVE THOMAS: Well, you know, Rick is a very thoughtful, intelligent guy. When we started talking about doing the McKenzie’s again [we said] that we can’t just do them as they were with new jokes. It’s 35 years later, the world is a different place than it was back then. And back in 1978 and ’79 when Bob and Doug were first conceived, television was the centre of pop culture and now it isn’t. Now it’s the Internet, it’s (social media). So what are Bob and Doug like in this different world? We’re trying to come up with some stuff that I think would address that, where they’re still who they were but they are part of, and acknowledge, the modern world that they’re living in.

MC: It seems almost appropriate that they’re back together this year, given it’s Canada 150 and they’ve come to represent so much about Canadiana.

DT: You know, I would say it’s fortuitous but obviously I’m not happy for the reason for doing it. But that’s a terrific coincidence and both Rick and I have been very surprised at how the image of Bob and Doug has endured as a kind of a Canadian icon. The United States has a lot of icons – it’s George Washington, Superman, Batman. In Canada, once you get past the Mounties and the beavers, Canada doesn’t have a lot of icons and so when there’s a news story about Trump bullying Canada, they stick a cartoon of Bob and Doug up there [Laughs]. Somehow the cartoonists decide to make Bob and Doug the spokespersons for Canada, which I think is hilarious and speaks volumes about the kind of tongue and cheek and objective reality that Canadians have regarding themselves and the rest of the world.

MC: In terms of this fundraiser, is it difficult to create comedy out of a difficult situation that involves someone you love?

DT: Well this situation is delicate in some ways because, for example, Guy Caballero can’t come out in his wheelchair. There are certain jokes that you can’t do and whether or not Jake would be offended by that, and I don’t think he would, the audience probably would. You have to be very thoughtful about the kind of comedy you come up with. But the main thing is to make people laugh, to make them feel that their contribution to this cause was worthwhile and to make Jake and his wife laugh.

MC: Right. And the line-up includes Dan Aykroyd, Eugene Levy, Catherine O’Hara, Marty Short and so on. You don’t see a billing like this regularly.

DT: But interestingly enough these people do get together socially and do clown around and make each other laugh. I met all these people back in ’73/’74 and I was astounded then at how funny and talented they were, so the fact that they all went on and became successful didn’t amaze me; what amazed me was that I was lucky enough to be part of it.

MC: What are some fond memories that you have with this group of friends over the years?

DT: Well, I drove through Texas with Dan Aykroyd writing a movie about UFOs and we were interviewing people. This was when he was doing Saturday Night Live and I was at SCTV. We drove through Texas and spent a week talking to people that seen UFOs and researching and discussing. I have memories of sitting with Paul Shaffer and Eugene Levy and Marty Short after we saw The Exorcist for the first time, which just horrified all of us and we had to find ways of making it funny and to compartmentalize it because to me it was shocking.

And we used to get together at Eugene and Marty’s place. They rented a house [in Toronto] together for what Paul [Shaffer] and Marty used to call “Friday night services.” And we would just get together and have pizza and have a few drinks and make each other laugh. And Marty was always obsessed with Frank Sinatra. We had to have a keyboard there because if Marty decided to start singing Paul would get up and play for him. Those were really special times.

We’ve always had objectivity about where we are and here’s a classic example: Marty and I were driving to my parent’s house one time in Dundas and we were driving up the hill and we saw two old men walking down the hill and Marty said, ‘That’s us in three years’ and we both started laughing. We’ve never forgotten that image and here’s what we found particularly funny about it is that we knew back then that time moves very quickly. We saw the humour in how we were trying to leave our mark, trying to lead our lives, trying to do the things that we always wanted to do but in a very limited timeframe because it’s all gonna be over soon. And that kind of objectivity made the joke dark but it also made it really funny in a very deep and visceral way.

MC: Did anything ever come of your UFO movie with Dan Aykroyd?

DT: We finished the script and then we found out Spielberg was developing Close Encounters of the Third Kind and it was just like, ‘Oh shit, that’s the end of that.’

MC: Aside from raising money for Jake and his family, what hopes do you have moving forward for this fundraiser?

DT: It’s a very simple hope and it’s that everyone goes away feeling like they were at some really great party and had a wonderful time. Have you ever gone home from a party and said to your wife or partner or whatever, ‘That was great, wasn’t it?’ That’s what I wish. I hope that everybody goes home with that thought and then I would really feel like we had done the job of raising some money for Jake and the Spinal Cord Injury Ontario but also that we gave these people a good time.

Take Off, Eh: An All-Star Benefit for Jake Thomas takes place on Tuesday, July 18 at the Second City Mainstage in Toronto. Click here for more information. And to make a donation to Jake Thomas’s Road to Recovery’ and Spinal Cord Injury Ontario, visit gofundme.com/jakethomasmuskoka and/or sciontario.org/donate.