‘Why Can’t He Be Our President?’ Trudeau Graces Cover of Rolling Stone 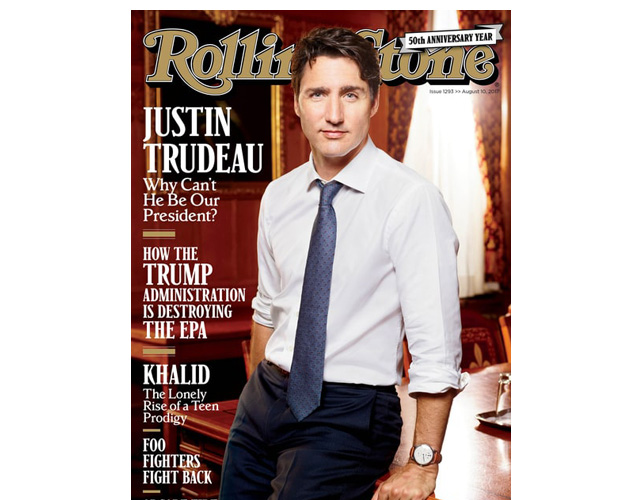 The prime minister is front and centre in the latest issue of Rolling Stone alongside the headline “Why Can’t He Be Our President?”

Justin Trudeau is in good company: The 45-year-old prime minister is among a select few of the world’s leaders who have graced the cover of the pop culture magazine. Previous subjects include former U.S. presidents Barack Obama and Bill Clinton.

In the casual cover image for the latest Rolling Stone issue (note Trudeau’s rolled up shirt sleeves), the prime minister is the epitome of cool professionalism in the photo by Martin Schoeller. Writer Stephen Rodrick’s article, published online this week, details Trudeau’s life and outlines the contrasting leadership styles of the prime minister and U.S. president Donald Trump.

Rolling Stone scribe Rodrick quotes Trudeau: “Obviously, I disagree [with Trump] on a whole bunch, but Canadians expect me to accomplish two things at the same time, which is emphasize where we disagree and stand up firmly for Canadian interests. But we also have a constructive working relationship, and me going out of my way to insult the guy or overreact or jump at everything he says [that] we might disagree with is not having a constructive relationship.”

In the interview Trudeau also briefly touches on his relationship with his father, Pierre. “My dad was an incredibly tough, brilliant, strong figure in all the classic senses of strong, but also with the weaknesses that come with being a sometimes emotionally distant person.”