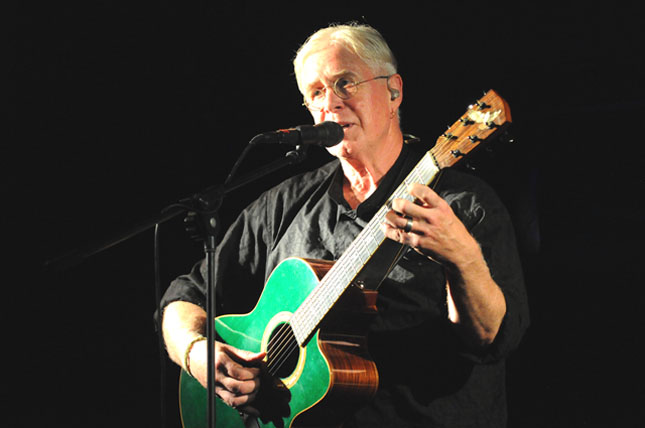 At 72, Bruce Cockburn is as in demand as ever, which means the only way to catch up with him is when he calls me from the road, travelling down another highway somewhere near his adopted hometown of San Francisco. The Canuck music legend swings through Canada on tour this summer before heading into the U.S., drops a new disc, Bone On Bone, his first studio album in six years, on Sept. 15 and then follows it up with an induction into the Canadian Songwriters Hall of Fame later that month. Oh, and he’s got a 5-year-old girl at home who, like her father, values quality daddy-daughter time. As such, Cockburn carved out a few minutes on the road to talk his new album, being daddy to a 5-year-old at age 72 and what it means to be a songwriter in these turbulent political times.

MIKE CRISOLAGO: You’ve got a tour, a new album and the Canadian Songwriter’s Hall of Fame induction in the next few months. How does it feel to be so in demand at this point in your career?

BRUCE COCKBURN: It feels great. But I mean I could be busier, which is a good thing … I’ve got a five-year-old at home so I like to be at home too. It’s nice to know that there’s enough interest out there that I can say no to some things.

MC: In recent years you’ve gone long periods of time between albums. What was the impetus or inspiration for Bone On Bone?

BC: It’s kind of the same as usual for me. The big difference here is that I got side-tracked working on my memoir [Rumours of Glory, 2014]. The book took three years and a bit to write and during that time I didn’t write any songs. So when that was put to bed I’m sort of looking at myself going “Are you a songwriter again now?” And luckily for me, it wasn’t a very long time before the songs started to come.

MC: Did having your daughter change your focus when you were writing?

BC: I would say yes. There are no songs about that specifically, but I think that there’s no question you look at the world differently when you’re handing it on to someone else in effect. And I’ve been through this before. My older daughter’s 40 and she’s got four kids of her own. It asks more energy of me than I probably have [but] it’s also really great, really fresh. I have a better perspective on being a parent than I did when I was younger.

MC: It must also affect how you tour.

BC: Yes. If you’re in any kind of relationship with someone who can’t tour with you there’s always tension between the home front and the tour front and you have to figure out a balance. When you’re 30 and you have a kid you think you’re going to live forever and if you miss a couple of moments in the child’s development, big deal because you’re going to see lots of others. But at this point in my life I don’t want to miss anything because I won’t get a second chance at it. So we’ll tour for a shorter stint at a time with more breaks in between.

MC: You’re going into the Canadian Songwriters Hall of Fame in September. What does it mean for you to be honoured by your peers in that way?

BC: It means a lot. It’s very gratifying that the people who have been paying attention think it’s good enough to warrant that honour. A few years ago I got into the Canadian Music Hall of Fame [at the Junos] and it felt pretty strange because it’s a hall of fame – aren’t you supposed to be dead for that? And then I had to get up and make a speech on national TV as part of the Juno thing and that was terrifying. But now that I’ve done that I don’t feel like I have to be dead and I think we get to perform so it’ll be fun.

MC: Artists like yourself and Bob Dylan and others included a lot of social activism in your music. Today the political climate resembles the heated protest culture of the 1960s. What do you feel is the duty of a songwriter in times like this?

BC: Well, the first and foremost duty is to make art. Delivering polemics is not effective and it doesn’t ring true. But for me the first thing you have to do is write a good song. The second thing you have to do is it has to mean something and then what it’s going to mean is going to be determined by the things that are on your mind. For me, I can’t sit and think, ‘Gee, you know, Trump’s really an asshole, I better write a song about him.’ Doesn’t work like that. And it’s more of a mood thing and that doesn’t mean that some set of circumstances can’t produce a very specifically focused song. I mean, that’s what “If I Had A Rocket Launcher” was — a response to a very particular circumstance. But if I don’t get the idea it does me no good to try to come up with one in an artificial way. But the duty is to speak the truth and do it well.

MC: In an interview with Zoomer a few years ago you mentioned that when you turned 50 you were allowed to have fun with your life. How do your 70s feel?

BC: Feels older. That’s the biggest one. I guess I see myself as an Elder in a way, with a capital “E.” That’s a new thing and I don’t like to make too much out of that because it’s for other people to decide if I have that status. I think of those models that I have like Mississippi John Hurt, who went on as an old man playing for young people and having an effect on them that was beyond just an hour’s entertainment and I hope that if I’m in a position like that where I have an effect on people that it’s a meaningful, worthwhile effect. And I also obviously hope I can keep on making a living doing that for as long as possible.

MC: And you mentioned your 2014 memoir earlier. In that book the story stops at the year 2004. Have you planned a follow-up to bring it up to date?

BC: There’s no plan like that, but it could happen. I guess especially if I become debilitated in some way and can’t keep performing, or if the song writing thing runs dry. Who knows? There’ll be a story to tell, but whether I’ll get bored enough or live long enough to tell it …

Click here for Bruce Cockburn tour dates and album details. And for more information on the Canadian Songwriters Hall of Fame, click here.