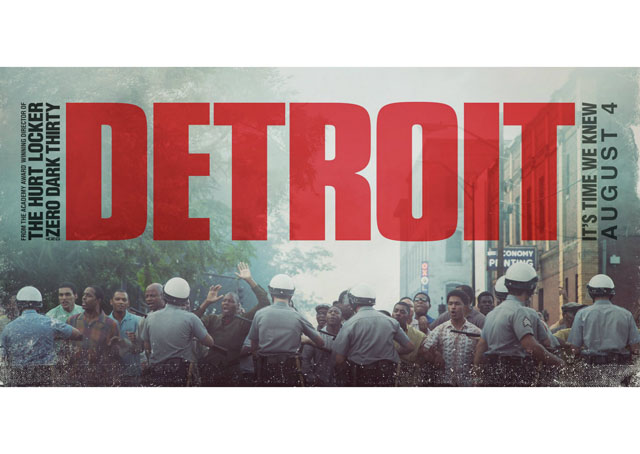 This is not just the story of an incident that changed a city 50 years ago. It’s the story of what, in 50 years, hasn’t really changed at all.

Choice Quote: “When you’re black, it’s almost like having a gun pointed right at your head.”

The Hype: A searing, violent re-telling of the Algiers Motel incident during the 1967 Detroit riots, which saw white police officers interrogate and torture a group of mostly African-American teens at the motel, resulting in three deaths.

The Reality: “It’s hard to believe that this could happen in America…” the 1967 television news anchor declares as the camera pans the carnage, looting and fires that engulfed Detroit’s 12th Street neighbourhood, scene of a five-day riot that resulted in 43 deaths and scars clawed even deeper into the city’s already festering racial divide.

And yet, something about Bigelow’s tension-fuelled film rings sharply … familiar. Sure, a National Guardsman shouting “Sniper!” as he patrols a Detroit neighbourhood is unsettling, but a situation where a white police officer shoots an unarmed black man on an American street feels, tragically, like regular viewing between Trump gaffes and the weather report on the evening news. The fact that the officers most often don’t face jail time for what seemingly amounts to institutionalized executions, or that race protests and riots endure with regularity (see: the fiery unrest in Ferguson, MO, following the fatal shooting of unarmed 18-year-old African-American Michael Brown), or that groups like Black Lives Matter face constant pushback, just add to the scale of tragedy on display. So is it truly “hard to believe that this could happen in America”?

What is hard is sitting through Detroit – which arrives 60 years to the summer of the original riots – without cringing, or clenching a fist. This is not a “happy” movie. It doesn’t lean on the idea that the violence and brutality is counterbalanced with a feel-good ending. Very little about this movie feels “good,” beyond some spiritual and calming moments of musical grace. And that’s the point.

From the beginning, viewers are dropped right into the middle of the fray – police raid a party for two returning black G.I.’s from Vietnam at an unlicensed after hours club in a black neighbourhood, and the situation quickly devolves into a five-day civic war that attracts looters, rioters and military force. The opening moments of the film set the table for the Algiers Motel incident – it’s us (white cops) vs. them (black teens) – if not entirely reflecting the greater historical context of years of strife between the Detroit police and African-Americans. In fact, this film doesn’t bother much with details like what happened leading up to the riots, or backstories to the various characters. It takes place in the moment, the camera bolting alongside a young black man attempting to outrun the police, or creeping uncomfortably close to the bloody handprint on the Algiers Motel wall, defiantly steady as if to reflect the resolve of the teens tortured that night.

The majority of the film takes place in the motel, where a collection of kids, mostly black, gathered to ride out the riots. There’s Larry Reed (Algee), lead singer of aspiring Motown group The Dramatists along with his pal Fred Temple (Latimore); returned military man Greene (Mackie) and a group of friends that includes Carl Cooper (Jason Mitchell) and Aubrey Pollard (Nathan Davis Jr.); and two white teens, Julie Ann (Hannah Murray) and Karen (Kaitlyn Dever), whose friendships with the black teens only heightened the torment they all faced at the hands of the racist officers.

As for those police officers accused in the murders, their names were changed for the film but their portrayals are so vivid – led by Poulter, with O’Toole and Reynor – that viewers cringe every time they club one of the teens in the face with a gun, or take them individually to different rooms of the motel to play the “death game,” or sneer and declare that they intend to take vengeance on a cop killer when no police officer, in fact, had been killed at all. And then there’s local African-American security guard Melvin Dismukes (Boyega), who acts as something of a conflicted conscience of the film, at once negotiating the terribly delicate balance between defending the teens against racist police brutes while attempting to make good with the brutes in the hopes of softening them enough to let the teens go.

Flashes of the legal fallout follow but, again, this is no fairytale. Instead it’s frustratingly real life, with frustratingly flawed characters wielding powers of justice that seem anything but.

The film does have its detractors, from those who wish there was more character and historical background to those who question whether a white director and screenwriter (Mark Boal) are qualified to tell an inherently black story. Ultimately though, for any of its merits and perceived missteps, Detroit is unapologetic. This is why a black person in America might feel, as a character in the film says, like they have a gun pointed right at their head. This is what activists on the news mean when they use terms like “institutionalized racism.” This is not just the story of an incident that changed a city 50 years ago. It’s the story of what, in 50 years, hasn’t really changed at all.

The Verdict: Kathryn Bigelow proved her adeptness at capturing the horrors of warzones with her Iraq war thriller The Hurt Locker. And almost everything about Detroit resembles a war zone, with its story violently and compellingly told.