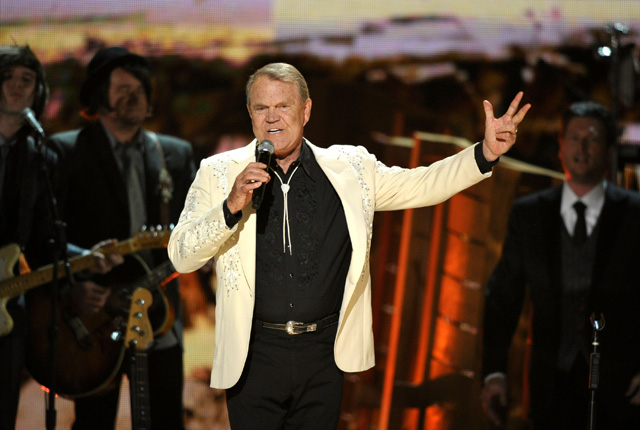 The Rhinestone Cowboy passed away on Tuesday (Aug. 8, 2017) at age 81 after a years-long battle with Alzheimer’s disease.

Music legends, politicos and TV stars are among the thousands of fans taking to Twitter to pay tribute to country music great Glen Campbell, who died early Tuesday after a long battle with Alzheimer’s disease.

Dolly Parton declared Campbell, “one of the greatest voices of all time,” Kathie Lee Gifford called him a “towering talent & a tenderhearted, delightful man” while country star Brad Paisley thanked him “for the artistry, grace & class you brought to country music. You were a shining light in so many ways.”

Campbell, whose hit tunes like “Rhinestone Cowboy,” “Gentle on My Mind” and “Wichita Lineman” propelled him to musical stardom in the 1960s and 1970s, also proved a formidable force on the big and small screens with TV shows like the CBS variety program The Glen Campbell Goodtime Hour and in film, like with his supporting role in the John Wayne classic True Grit, for which he also earned a Grammy nomination for the title song.

The singer also put up a brave front in the face of Alzheimer’s, taking on a 15-month farewell tour while battling the disease, which wrapped up in 2012, followed by a final studio recording, Adiós, a collection of covers recorded following the final tour but released this past June.

“Heartbroken. I owe him everything I am, and everything I ever will be,” Campbell’s daughter, Ashley, who is also a singer, wrote on Twitter, accompanied by a photo of her grasping her father’s hand. “He will be remembered so well and with so much love.”

Heartbroken. I owe him everything I am, and everything I ever will be. He will be remembered so well and with so much love. pic.twitter.com/1Z8mm8Jzth

Glen Campbell was one of the greatest voices of all time. I will always love you, Glen! pic.twitter.com/LQFEWA42lF

Dear Glen Campbell Rest In Peace As well as your incredible musical abilities you were one of the most down to earth ppl I have ever known.

Saddened by the passing of Glen Campbell, a great entertainer, a great man & a great Arizonan – thanks for the memories!

Extremely sad to hear that Glen Campbell has passed away. My prayers and thoughts go out to him and his family.

Thank you @GlenCampbell for the artistry, grace & class you brought to country music. You were a shining light in so many ways.

The great @GlenCampbell has taken his guitar and iconic voice to the other side, to play in an Angel band. We will miss you Glen.. #RIP

We lost a music legend today. Rest in peace, Glen Campbell. Sending love and prayers to his family. pic.twitter.com/CqW5eMFXAF

Truly sad to hearing of the passing of @GlenCampbell. What a towering talent & a tenderhearted, delightful man. Sending his family my love.

RIP #GlenCampbell One of the greatest artists of all time. Thank you for the music. https://t.co/J8ABlrOuo6