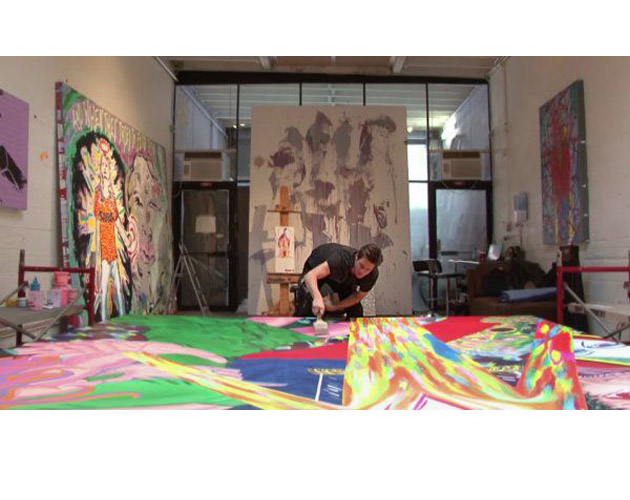 The 55-year-old Canadian actor invites fans inside his New York art studio in the short documentary film, I Needed Color.

Known for his versatility as a performer—the man can make you laugh out loud one moment and cry the next—Jim Carrey also has a not-so-hidden talent outside the realm of acting: fine art.

Carrey, who’s been sketching and painting since he was a kid growing up in Newmarket, Ont., recently put his artwork on display in the six-minute online documentary short, I Needed Color. While a handful of diehard fans were already aware of the comedian’s “second career,” others were shocked by the full extent of his artistic talents.

His impressive works includes miniature clay sculptures, vibrant life-size paintings and collages containing words and shapes. Carrey admits in the doc that he first began seriously painting six years ago while trying to “heal a broken heart.” (He and longtime girlfriend, actress-model Jenny McCarthy, split in 2010).

“I like the independence of it,” he continues. “I love the freedom of it. No one else tells you what you can or can’t do, most of the time. And there’s an immediacy to it.”

While the documentary, directed by David Bushell, was initially released two weeks ago, it only recently gained traction on social media after a tweet from NBA star LeBron James went viral: “This is incredible!! I had no idea either. Unbelievable work @JimCarrey! Would love to see some of your work in person some day! Love art.”

Carrey responded on Twitter: “Thx 4 ur kind words @KingJames. I’d be honored 2 hang with u any time. Can u imagine 2 King James’ in the same room? Sss’make it happen!”

The video has since racked up more than two million views (so far), and continues to grow in numbers since James’ tweet last week.