A History of Romance on the Big Screen 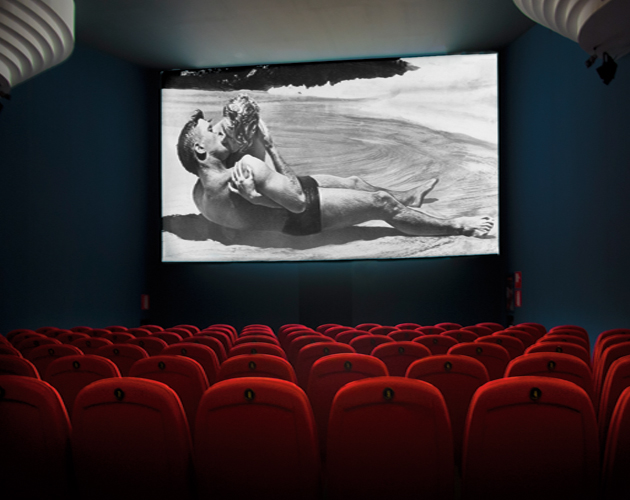 Sex and passion make for good box office. But when true romance unfolds on the big screen, it becomes a lasting affair.

Jean-Luc Godard famously said, “All you need to make a movie is a girl and a gun.” I’m still not sure about the gun. It may rule the box office (sometimes without the girl), but my passion for movies begins and ends with their depiction of love, sex and relationships.

Every May for the past two decades, I’ve been drawn to the Cannes Film Festival. Hosted by a country that treats film as a religion and love as a national sport, Cannes is world cinema’s rite of spring. Like pilgrims on a grail quest, we keep coming back, hoping to see the movie that will change the future of cinema. But what we’re really pursuing is a romance with the past—and with romance itself.

Cinema and romance are inseparable on so many levels. We look for romance in the movies and we have a romance with the movies. What a curious and complicated affair it has been, taking us From Here to Eternity and Back to the Future, from Casablanca to Philadelphia, over a cliff with Thelma & Louise and into a tent on Brokeback Mountain. It’s had us Singin’ in the Rain and Dirty Dancing through the Last Tango in Paris. It left us Moonstruck in Manhattan, Sleepless in Seattle, Breathless, Swept Away, Knocked Up…and always In the Mood for Love. It’s The Way We Were.

Films, like most love affairs, are fleeting (though both can seem interminable). And we’re forever looking for the perfect match as we chase that unreliable genre called the date movie—a place in the dark where we might fall in love, see how it’s done or remember what it felt like. The date movie is now typically a formula romcom.

But there was a time when grown-up films about love and sex led the cultural conversation. And when I was a teenager trying to sneak into restricted movies, cinema and sin seemed synonymous. Long before the Internet or videotape, movies were the only place you could see people get intimate and hopefully, naked. And where else could you get close to a girl in the dark, aside from a parked car? The drive-in movie, of course, offered the best of both worlds, until it was driven to extinction by the suburban multiplex.

Before real girls entered the picture, my first crushes existed on screen, as I graduated from Haley Mills when I was 12 (The Parent Trap) to Julie Christie at 16 (Darling) to Tuesday Weld at 18 (Pretty Poison). The movies I remember from childhood are spectacles I saw with my family—Ben Hur, Spartacus, Lawrence of Arabia, Dr. Zhivago, West Side Story.

But by 1966 I was beginning to see films you wouldn’t want to see with your parents. The first was Michelangelo Antonioni’s Blow-Up. It won the Palme d’Or in Cannes the year after A Man and a Woman, not that Cannes meant any thing to me back then. But Blow-Up was the first movie that blew my mind—an existential riddle about a famous fashion photographer who cruises around London in his Rolls convertible and inadvertently photographs a crime scene while snapping pictures in a park.

Boomers would never find a better poster boy for their aimless desire and disillusionment than Dustin Hoffman—adrift in the family pool, sailing into the jaws of the generation gap as he’s seduced by an older woman while falling for her daughter. Propelled by an entire album of Simon & Garfunkel songs, from “Mrs. Robinson” to “The Sound of Silence,” The Graduate was a perfect storm of eros and angst. Technically, it’s a romantic comedy.

But with that last lingering shot of the victorious young lovers side by side, stone-faced at the back of the bus, you know anything could happen. They could very well end up like Richard Burton and Elizabeth Taylor in Who’s Afraid of Virginia Woolf, the excoriating first feature that Nichols had directed a year earlier. Throw in the compulsive duplicity of Carnal Knowledge, which came a decade later, and Nichols gave us three of the most savagely eloquent movies ever made about modern love and betrayal.

But for the longest time it was Woody Allen who served as America’s designated director of the Relationship Movie. He made films for and about people who went to films and couldn’t stop talking about them—a feedback loop that came full circle in Annie Hall, with Allen and Diane Keaton standing in a movie line-up listening to a professor pontificate about Fellini and McLuhan, until Woody is so exasperated that he drags the real-life Marshall McLuhan into the picture to settle the score. The perfect date movie within a date movie.

For two decades, the ’70s and ’80s, Allen’s movies mirrored the times, an ongoing dinner party of characters who had the kind of conversations that we could continue outside the theatre. But when the Soon-Yi scandal hit in 1992, a revisionist shadow fell over his work. We looked back on a canonical masterpiece like Manhattan, with its scenario of Woody seducing a teenage student, and wondered why it didn’t seem so creepy at the time (though my wife insists it always was).

Allen avoided suspicion because he typecast himself as the anti-leading man, the nerdy New York alternative to Hollywood’s alpha dogs, Robert Redford and Warren Beatty (who also liked to direct). Woody was supposed to be the male director who knew how to write for women and gave them room to be themselves on screen. Suddenly he was the sensitive predator.

Diane Keaton had blossomed in Allen’s films, but they also cemented her persona as a ditz. Oddly enough, it was with Beatty, the notorious womanizer (and briefly her boyfriend) that she met her match on screen, when they co-starred in Reds (1981). Starring Christie and Beatty as journalist Louise Bryant and Communist firebrand John Reid, Reds was no romcom but, at the heart of this massive epic, Beatty’s domestic scenes with Keaton—fighting over politics and writing, love and art—are incredibly potent and seem to speak directly to their chemistry as ex-lovers struggling to collaborate.

For most of my life, movie romance has been dominated by men. But in the late’80s and ’90s, writer-director Nora Ephron deftly turned the tables, or at least one table, with a string of romcoms. Meg Ryan sparred with one Mr. Nice Guy after another in When Harry Met Sally…, Sleepless in Seattle and You’ve Got Mail, but these films offered more comedy than chemistry. There’s also Nancy Meyers, who directed some hits, but with gags so broadly contrived—a naked Diane Keaton shrieking with embarrassment in Something’s Gotta Give as she and Jack Nicholson go bump in the night—that it felt like a step backward in the sexual revolution.

Then along came Judd Apatow and his clubhouse of profane stoners. Setting up a dorky Canadian unknown named Seth Rogen opposite Katherine Heigl seemed like a stretch in Knocked Up. But finally, here was a romcom that broke formula while dragging its male protagonist kicking and screaming to the alien planet of pregnancy and childbirth.

Even with Jay Baruchel running scared from the delivery room, it achieves a backhanded feminism. And Apatow, king of the penis joke, would go on to produce Bridesmaids—the breakthrough for female comedy that made movie stars of Melissa McCarthy and Kristen Wiig—and he would help create Lena Dunham’s Girls, a series that has allowed women to be as vulgar and self-involved as men. Also as producer and director of Trainwreck, he sent the incendiary Amy Schumer into Hollywood orbit, with a script and performance that turned the romcom paradigm of male-female roles on its head.

The last good date movie I remember is Wedding Crashers. (I’m still waiting for someone to reunite Rachel McAdams and Owen Wilson. Why couldn’t they have been the next Tom Hanks and Meg Ryan?) In our house, these days our date movies consist of binge-watching Netflix. Forget Blow-Up. Is there any more exhaustive portrait of reckless promiscuity, framed by emerging female empowerment, than Mad Men? We once looked to films by Bergman and Cassavetes for scenes of a tortured marriage. But domestic hell doesn’t get any deeper than the marital meltdowns in Breaking Bad or House of Cards. The dark narrative of sexual intimacy has wormed its way back into the home, where the stories begin.

But movies still get us out of the house. And you can’t get much further out than Cannes. There, as Woody Allen held court at a press conference for Café Society, with Kristen Stewart by his side, a female journalist had the nerve to ask him why he has never made a movie about romance between an older woman and a younger man. Allen replied, almost too honestly, that he had nothing in his experience to draw on.

As it happened, this year Cannes produced an abundance of films driven by strong female leads, including two in which older women seduce young men—a mastectomy-scarred Sonia Braga as a defiant widow in Aquarius and an icy Isabelle Huppert as a rape victim getting even in Elle. But there was only one pure love story in the Cannes competition, fittingly called Loving. It’s based on the true story of Richard and Mildred Loving, an interracial couple from Virginia who fought in the courts for the right to live as man and wife. Almost 50 years ago, their enduring romance changed history.