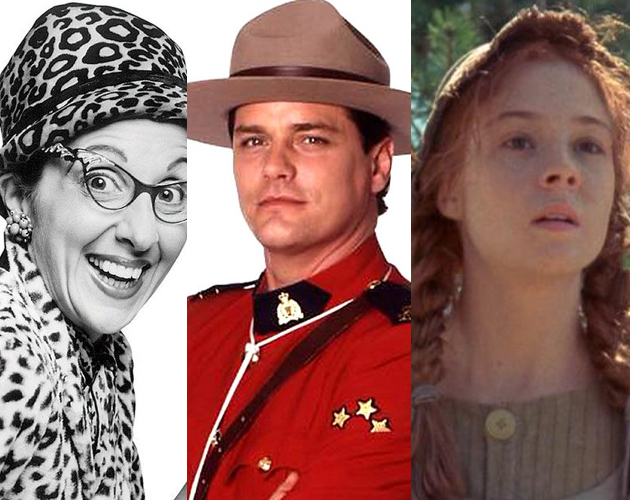 From Wayne and Shuster to Due South, we take a trip down memory lane and uncover fun trivia about some of your favourite Canadian TV shows.

In celebration of Canada 150, we’re revisiting the likes of Anne Shirley, Count Floyd, The Six Hundred Dollar Man—and a host of other eclectic Canadian TV characters—and uncovering fascinating facts and trivia about some of the biggest series to ever come out of the Great White North.

We kick things off with SCTV…

SCTV (1976-1984)
The sketch comedy show boasted the likes some of the best North American talent in comedy, including Canadians Catherine O’Hara, John Candy, Eugene Levy, Rick Moranis and Martin Short. The show, broadcast from a fictitious TV station in the town of Melonville, comprised of a variety of programming seen on the station throughout the day. Any given episode could feature commercial send-ups, talk shows, movies, sitcoms and game shows.

Fun facts:
The total budget for the first seven episodes of the series was a mere $35,000.

The city of Edmonton was willing to foot the bill for 26 episodes if the series was filmed in Alberta for one season. Eugene Levy, for one, was not impressed. “People didn’t want to move to Edmonton because it was Edmonton,” he said.

Rick Moranis is the only SCTV member who did not come from a Second City improv group.

Due South (1994-1999)
This lighthearted crime series created by Paul Haggis catapulted Paul Gross to fame. The show follows the (mis)adventures of Constable Benton Fraser (Gross), an officer with the Royal Canadian Mounted Police (RCMP), who works closely with both the Canadian consulate and Detective Raymond Vecchio (David Marciano) of the Chicago Police Department. Along for the ride is Fraser’s furry companion, Diefenbaker, a deaf white wolf.

Fun facts:
During the third season, producers demanded the premise of the series be inserted into the opening credits so first-time viewers wouldn’t wonder what a Mountie was doing in Chicago. It was Paul Gross who ultimately suggested including the premise in each episode: “I first came to Chicago on the trail of the killers of my father, and for reasons that don’t need exploring at this juncture I’ve remained, attached as liaison with the Canadian Consulate.” It quickly became a running gag, with the writers searching for unique ways to insert the line into every script.

The late comedian Leslie Nielsen, who played the role of Mountie Buck Frobisher, was the real-life son of a Mountie.

Next: This Hour Has 22 Minutes

This Hour Has 22 Minutes (1993-present)
This weekly TV series first launched in 1993 during Canada’s 35th general election. The show is a mishmash of political commentary, news parody and sketch comedy.

Fun facts:
After filming a guest appearance in November 2004 in which she stomped on a George W. Bush doll, MP Carolyn Parrish was kicked out of the Liberal Party caucus by then-PM Paul Martin.

The title of the show is a play on This Hour Has Seven Days (1964), a controversial CBC news program that lasted a mere 50 episodes.

The Beachcombers (1972-1990)
The series chronicled the life of Greek-Canadian log salvager Nick Adonidas (Bruno Gerussi), who earns a living with his buddy Jesse Jim (Pat John) by travelling the coastline northwest of Vancouver to track down logs that broke away from barges. The Beachcombers also revolved around the secondary characters in Nick’s hometown of Gibsons, often focusing the patrons of Molly’s Reach, a café run by Molly (Rae Brown).

Fun facts:
With 18 seasons under its belt, The Beachcombers was the longest-running Canadian prime time drama in history. It was ultimately canceled due to CBC budget cuts and declining viewership.

The series was syndicated across the globe, including all Commonwealth nations and the United States. The West German TV station ZDF broadcast the series as Strandpiraten, which translates to “Beach Pirates.”

Next: The Kids in the Hall

The Kids in the Hall (1989-1995)
The iconic Canadian sketch comedy group formed in 1984, before embarking on their eponymous Lorne Michaels produced TV series which aired on CBC in Canada and HBO in the United States. The group, with its controversial brand of humour, consists of Dave Foley, Bruce McCulloch, Kevin McDonald, Mark McKinney and Scott Thompson. The theme song, with its recognizable guitar riff, was the instrumental “Having an Average Weekend” by Canadian band Shadowy Men on a Shadowy Planet. Although the troupe made only one feature film (1996’s critically-panned cult classic Brain Candy) and one miniseries (2010’s Death Comes to Town), they’ve reformed for tours and comedy festivals over the years, most recently with 2014’s Rusty and Ready tour.

Fun facts:
The troupe got their name from a line that comedian Sid Caesar frequently said after cracking a joke: “I got that one from the kids in the hall.” It referred to the aspiring joke writers who always hung around him after shows.

Initially, Bruce McCulloch and Mark McKinney worked together (along with three other members) in Calgary with the comedy troupe, The Audience. At the same time in Toronto, Dave Foley and Kevin McDonald were performing (along with Luciano Casimiri) as The Kids in the Hall. The two pairs first met in 1984 on the comedy circuit and came together as one group (the other members left) and later invited fan Scott Thompson to join in 1985.

When the series ended in 1995, producer Lorne Michaels wanted to sign all five “Kids” to his late-night staple, Saturday Night Live, but only Mark McKinney signed on. McKinney rarely appeared onscreen (although he brought over his infamous Kids character Chicken Lady) and left after only two seasons.

Next: Wayne and Shuster

Wayne and Shuster (1955, etc.)
Comedians Johnny Wayne and Frank Shuster met in 1930 at Harbord Collegiate Institute in Toronto. Both later studied at the University of Toronto, where they made their radio debut on CFRB in their show, The Wife Preservers. This exposure resulted in their own TV series with the CBC and the duo performed their brand of slapstick together well into the 1980s until Wayne’s death in 1990.

Fun facts:
Wayne and Shuster enlisted in the Canadian Army in 1942, performing for the troops in Europe throughout the Second World War as part of the “Army Show.” They would later perform for the troops in the Korean War as well.

They performed a record-setting 58 times over the span of 11 years on The Ed Sullivan Show.

Despite multiple offers to make the move to the United States, Wayne and Shuster preferred to remain in Toronto.

Front Page Challenge (1957-1995)
Created by comedy writer John Aylesworth, this panel game produced by the CBC focused on current events and history. Each round of the game kicked off with news footage that introduced the news story in question to the audience out of earshot of the panelists. Once the guest was identified or the news story determined, the journalists on hand interviewed the guest about the achievements for which they were known.

Many non-Canadian guests had their trips to Canada paid for by the CBC. For example, Gandhi was flown from India to Toronto in the 1960s at the expense of the CBC.

When Front Page Challenge ended in 1995, it was the longest-running non-news program in Canadian TV history. One of the contestants on the final episode was up-and-coming country singer Shania Twain.

In a 1982 episode of SCTV, Front Page Challenge was parodied as Headline Challenge.

Next: Anne of Green Gables

Anne of Green Gables (1986)
Based on the 1908 novel by Lucy Maud Montgomery, Anne of Green Gables recounts the misadventures of Anne Shirley, an orphan who is mistakenly sent to middle-aged siblings Matthew and Marilla Cuthbert who wanted a boy to help them with the farm in the fictional town of Avonlea in Prince Edward Island. The novel has since been translated into more than 20 languages.

Fun facts:
Director-producer Kevin Sullivan purchased rights to the book before ever having read it. Once the screenplay was underway, Sullivan and co-writer Joe Wiesenfeld fleshed out Anne’s backstory by featuring Mrs. Hammond and her gaggle of unruly children (they are only briefly mentioned in the book). He said, “What I tried to do was go back several stages in Anne’s life and depict a world that had aspects of severity and cruelty, and that by the time she reached Prince Edward Island, it was like coming to a dream world.”

Sullivan auditioned more than 3,000 girls for the lead role. Megan Follows was one of the first to vie for the part, but was initially passed over for being “too contemporary.” She was given a second chance with Sullivan and ultimately landed the role.

Katharine Hepburn—yes, the Katharine Hepburn–suggested her niece for the role of Anna. “One day, out of the blue, I had a call from Katharine Hepburn,” Sullivan said in an interview. “She asked me to go to California and to meet with her niece, Schuyler Grant, and to audition her…and Schuyler was terrific.”But the film’s financiers, the CBC and Telefilm Canada, urged Sullivan to find a Canadian actress to play Anne.

What’s your favourite Canadian TV show? Let us know in the comments!