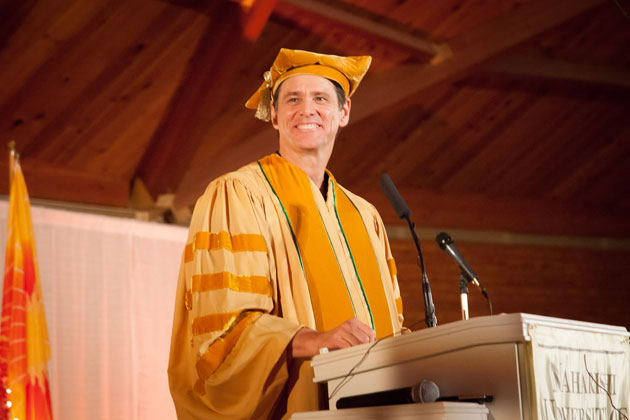 Holding the attention of young graduates during a commencement speech isn’t the easiest thing to do—unless you’re famous. Here, 5 celebs who entertained—and inspired!—with their words.

The commencement speech is a difficult art to master: They require the perfect mixture of inspiration, enlightenment and, of course, entertainment.

Presidents and Deans of universities may be perfectly qualified for the first two requirements, but for the latter it’s sometimes best to outsource to someone with a little more…charisma.

After receiving an honourary doctorate in arts from the University of Pennsylvania in 2017, Denzel Washington took to the podium to deliver an address in front of more than 5,000 graduates.

Deviating from your typical “go forth and prosper,” Washington spoke of embracing failure. “Every failed experiment is one step closer to success,” he says. “If you don’t fail, you’re not even trying.”

2. Jim Carrey: “Take a chance on doing what you love.”

“Follow your dreams” is a common message delivered during commencement speeches, but leave it to Jim Carrey to deliver it in such a creative way.

After receiving an honourary doctorate in fine arts from the Maharishi University of Management in Fairfield, Iowa, in 2014, Carrey shared a valuable lesson he’d learned from his childhood.

He told them that his father could have been a great comedian but, instead, took a more financially secure job as an accountant. Taking the “safer route”, however, backfired when he lost his job and the Carrey family fell on hard times.

“I learned many great lessons from my father, not the least of which was that you can fail at what you don’t want, so you might as well take a chance on doing what you love,” Carrey says.

3. Ellen DeGeneres: “Be true to yourself.”

In 2009, Ellen DeGeneres delivered a commencement speech to Tulane University in New Orleans. The graduates in attendance had started their studies the same year Hurricane Katrina had hit in 2005.

At the onset of the speech, she points out the irony of her selection as commencement speaker: “I didn’t go to college at all,” she admits. “And I’m not saying you wasted your time or money, but look at me I’m a huge celebrity.”

On a more serious note, the New Orleans native spoke about the difficulties she endured in show business after she came out as a lesbian. After her sitcom, Ellen, was cancelled after six seasons, she said her phone didn’t ring for several years.

However, looking back DeGeneres admits she wouldn’t change a thing. “It was so important for me to lose everything because I found out the most important thing was to be true to yourself,” she says.

In 2011, Tom Hanks delivered a commencement speech at Yale University. The overarching theme to his speech? Taking fear head on.

“Fear has become the commodity that sells as certainly as sex,” Hanks explains. “Fear twists facts into fiction that become indistinguishable from ignorance.”

Defeating fear, he says, requires a choice being made at the beginning of each day. “Your rising from bed every morning will give fear its chance to grow stronger just as it will afford faith its chance to blossom,” he says. “You will make the choice to react to one or create the other.”

5. Oprah Winfrey: Understanding the “Why”

After receiving an honourary degree from Smith College in Northhampton, Massachusetts in 2017, Oprah Winfrey treated the graduating class to a nearly 30-minute commencement address.

Inviting the audience into her past, she spoke of a defining moment in her career before her successful talk show.

Early in her journalism career, while on an assignment in Chicago, Winfrey was tasked with interviewing members of the Klu Klux Klan. During filming of the segment, she realized that the members were using signals to convey a message of their own.

It was then that she says she decided she would no longer be used by television. Instead she vowed to “create a platform that could be of service to its viewers.”

She says the moment she made that decision, her life changed. “This understanding that there is an alignment between who you are and what you do is the real, true empowerment,” Winfrey says.