Donald Sutherland On News of His Honorary Oscar: “It was thrilling” 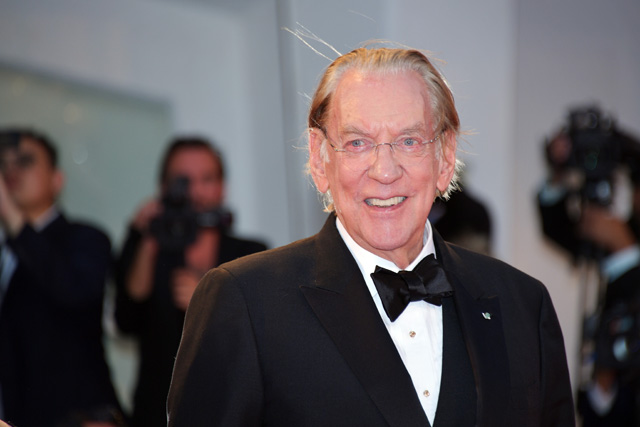 The Canadian acting legend tells Zoomer about how he found out he was receiving the honour, and what it means to him.

Last week the Academy of Motion Picture Arts and Sciences announced that legendary Canadian actor Donald Sutherland would receive an honorary Oscar, which is handed out in recognition of “extraordinary distinction in lifetime achievement, exceptional contributions to the state of motion picture arts and sciences, or for outstanding service to the academy.”

In a career that’s otherwise landed him countless awards and honours, from two Golden Globes to an Emmy and a Genie Award to being made an Officer of the Order of Canada, an Oscar has always eluded the former Zoomer cover subject. This morning, the 82-year-old star of classic films like The Dirty Dozen, M*A*S*H and Ordinary People sat down with Zoomer at the Toronto International Film Festival – for his new film with Helen Mirren The Leisure Seeker – and explained how he found out he was receiving the Oscar and what it means to him.

“John Steinbeck got word that he had received the Nobel Prize because he and his wife were sitting in their apartment in New York watching Good Morning America, or something like that, and they said, ‘John Steinbeck has received the Nobel Prize.’ And somebody else said, ‘Why would they give it to him?'” Sutherland laughs. “It has not been like that for me. It has been the most encouraging, wonderful [experience].”

Sutherland was in Rome with his wife Francine, shooting a film, when he received the news, getting the call at the end of the day when the couple was sitting down for dinner at their hotel. The actor sets the scene:

“We’re sitting on the balcony, and you’ve got room for yourself, room for a table, the rooftops of Rome are there and the sun is going down and it’s beautiful. My phone is there on the [table] and we have a bottle of flat water and two plates of spaghetti marinara. And the phone rings,” he recalls. “I look at it – it’s a number I don’t’ recognize. I am constantly getting calls from numbers I don’t recognize and I answer them and someone says, ‘We are going to change your life for you. Your credit card…’ So I say ‘Take me off your list, hang up now.’ Then I go and put them in my contacts as ‘Don’t answer, this is bullsh*t,’ whatever.”

Sutherland says he was prepared to do just that as he answered the phone.

“I say, ‘Hello?’ and a voice says, ‘Donald, it’s John Bailey.’ I haven’t heard from John Bailey for 30 years – he [was the cinematographer] on Ordinary People 37 years ago. And I said, ‘Hi John’ and he said, ‘I have been made president of the Academy.’ I said, ‘Congratulations.’ He said, ‘No, no, no, I’m phoning to congratulate you.'”

At this point Sutherland stops, looks away and, clearly moved, releases a deep sigh.

“It was thrilling. And I said, ‘Speak to Francine.’ He spoke to Francine. And then we hung up and ate spaghetti marinara.”

Sutherland receives his honorary Oscar at the Governor’s Ball on Nov. 11.