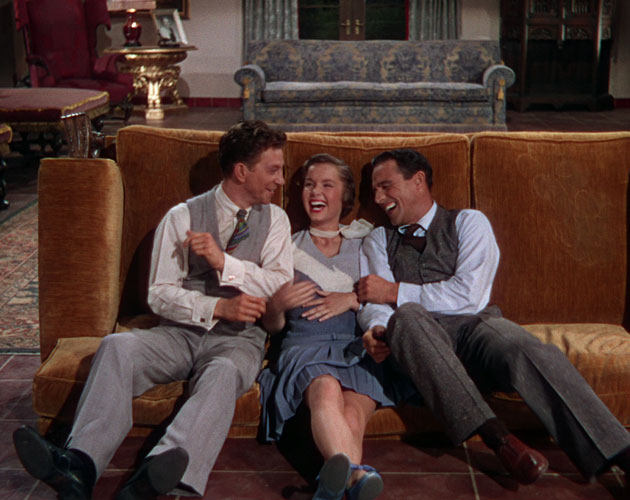 Photo: Still from Singing In The Rain

Believe it or not, these iconic musical numbers weren’t as effortless as they appeared on film.

When it comes to creating high-octane musical moments, there has to be something special that really makes them stand out.

What would Tom Cruise’s Risky Business dance look like without the socks and with the pants? Or West Side Story without its famous finger-snapping opening number? Or Dirty Dancing without that dramatic over-the-head lift?

However, these precise details – all of which add so much to the finished product – weren’t pulled together without a little adversity.

Here, seven beloved musical numbers – and the fascinating stories behind their creations.

If you have a keen eye, there’s a chance you might have noticed a little something … extra … in Jennifer Beals’ leotard during the film’s final dance number.

The scene called for a particularly difficult breakdance move called “the whip backspin” that neither one of Beals’ female body doubles could perform.

Enter then-16-year-old Richard “Crazy Legs” Colón, a breakdancer who’d made an appearance with his dance group The Rock Steady Crew earlier in the film.

After shaving his peach-fuzz moustache and donning a curly wig, he squeezed into a leotard and performed the number valiantly. “It’s funny when you slow that scene down and see what’s really going on,” Colón told the New York Post. “There’s a lot of manhood!”

Shooting one of the most famous opening scenes of all time wasn’t as easy as the final product might suggest.

Rain and high-altitude winds made it difficult to film anything usable for the majority of the week-long shoot. It wasn’t until the sun came out for a sparse 20 minutes on the final day of shooting that the scene all came together. Although, for star Julie Andrews, the struggle was just beginning.

“Every time the helicopter [filming the sequence] circled around me the down draft just flattened me into the grass,” Andrews told Mental Floss. “And I mean flattened. It was fine for a couple of takes, but after that you begin to get just a little bit angry … And I really tried. I mean, I braced myself, I thought, ‘It’s not going to get me this time.’ And every single time, I bit the dust.”

“Making Singin’ in the Rain and childbirth were the two hardest things I’ve ever done,” Debbie Reynolds once said.

The up-and-coming star was cast in the iconic film at the tender age of 19, without any dance experience—and only three months in which to learn how to keep up with dancing virtuoso Gene Kelly.

Reynolds maintained that her naivety about the task at hand ultimately helped her cause. “I didn’t know that I couldn’t do it. So I did it, and I was terrific,” she wrote in her 2013 memoir, Unsinkable.

However, before she could become “terrific,” she would face some adversity. Kelly, who was both the star and co-director of the film, initially disapproved of her casting and had no intention of going easy on the young actress. “He criticized everything I did and never gave me a word of encouragement,” Reynolds wrote.

At one point, the rehearsal schedule left Reynolds so exhausted that her doctor demanded she be given a break from filming. One particular day of shooting – for the song “Good Morning” – lasted more than 15 hours. “My feet were bleeding from hours of abuse,” Raynolds recalled. “I couldn’t move.”

When Reynolds finally broke down, Fred Astaire came to her rescue. After finding her in tears hiding under the rehearsal piano, he assured her that she was on the right track. “‘You’re not going to die,'” Reynolds recalls him telling her. “‘That’s what it’s like to learn to dance. If you’re not sweating, you’re not doing it right.'”

He then took her to another sound stage, where he was busy rehearsing with a choreographer. After watching him work to the point of frustration and anger, Reynolds better understood the struggles. “I realized that if it was hard for Fred Astaire, [then] dancing was hard for everyone.”

As it turns out, the Sharks and Jets weren’t exactly cut out for the musical mean streets of New York.

While shooting the film’s prologue on location in the Big Apple, the actors were pelted with rocks by residents in nearby apartment buildings, prompting the director to hire a local street gang to protect the talent.

The rest of the film, however, was completed within the safe confines of a Hollywood sound stage.

Olivia Newton-John’s famous leather pants were anything but ordinary.

In keeping with the film’s 1950s-era setting, the pants were – quite literally – from that decade. The wear and tear, combined with the skin-tight fit, made for quite the predicament. “[The pants] were already 25 years old when I wore them, and the zipper broke so they had to sew me into them,” Newton-John told Fox News.

The actress, who is also a breast cancer survivor, later auctioned off the costume to benefit the Olivia Newton-John Cancer Wellness Research Centre in Melbourne, Australia.

“It’s exciting to know that the costume will have a bigger purpose. Grease changed my life, and now it can help change the lives of others too.,” she told In Style.

The lake where Baby and Johnny practised their lift was a chilling 40 degrees during filming. To disguise Patrick Swayze’s and Jennifer Grey’s blue lips and chattering teeth, the film crew avoided any close-up shots of the pair.

“It was horrifyingly, hypothermically cold in that lake, and we filmed that scene over and over,” Swayze recalled in his 2009 autobiography, The Time of My Life. “And despite the fact that Jennifer was very light, when you’re lifting someone in water, take after take after take, even the skinniest little girl can feel like 500 pounds.”

With regards to the iconic lift itself, Grey told The Guardian that she had done it for the first time on the actual day of the shoot. “Never rehearsed it, never done it since,” she said. “I don’t know how all these people who reenact it have the guts to throw themselves into the arms of anyone other than Patrick Swayze.”

While Tom Cruise’s iconic celebratory dance was primarily ad-libbed, there were a couple of key adjustments made by the actor that – in retrospect – were absolutely essential.

Cruise had originally tried out the scene in his bare feet. “I kept falling,” Cruise told Oprah Winfrey. “So I thought, ‘Well, I’m going to put on my socks.'”

To ensure he hit his mark on the slide, he put some double-sided tape down on the slippery hardwood floor so that it would grip his socks at the exact right moment.

As for the frenetic dance routine that followed, it came to Cruise naturally. “That’s something that I did as a kid at home,” he told The Project.