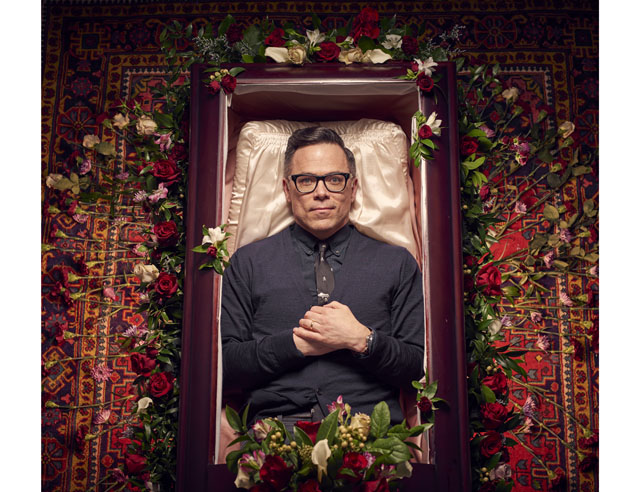 Canadian professor, researcher and author Timothy Caulfield took on pop culture health gurus in his award-winning 2015 tome Is Gwyneth Paltrow Wrong About Everything?: When Celebrity Culture and Science Clash. Two years on, the 54-year-old is back to tackle the truth behind fad diets, detoxes, genetic tests and other medical methods humans turn to in an attempt to stay forever young in A User’s Guide to Cheating Death – a six-part documentary series that launches on VisionTV (a ZoomerMedia property) on Sept. 18. Caulfield recently spoke with Zoomer about longevity myths and methods and whether cheating death is actually a good idea.

MIKE CRISOLAGO: Why are we so willing to accept a celebrity’s opinion on health and science but so quick to question actual scientists?

TIMOTHY CAULFIELD: I do think there is a little bit of erosion of trust in the traditional sources of scientific information. And whether that has to do with the involvement of industry or the involvement of particular political agendas, it’s causing people to look to other sources of information. And I think that celebrities are filling that void to some degree. People don’t necessarily turn to celebrities for advice but the mere fact that they’re talking about this stuff, whether it’s Gwyneth Paltrow or Tom Brady, they hear this stuff and it helps to validate crazy ideas about how we’re supposed to be healthy.

MC: When it comes to cheating death, though, haven’t humans always tried to fake out the Grim Reaper?

TC: That is something that’s always been part of being human. But the other thing that’s happening now that we are living longer is we want to live better too. But something I think that has been emphasized over the last couple of decades is our obsession with youth. And that’s not necessarily the healthiest trend because one of the things I hope comes across in the show is that there are simple steps that we can take to be healthy and happy throughout our life.

MC: You also discuss the myths and dangers of certain procedures, like a colonic, which, on the surface, seem like they would be helpful in cleansing the body.

TC: You make a really important point with something like the colonic – so many of these things have an intuitive appeal to them. Like you just said, they seem like they should work. I think detoxing is a really good example of that. It feels like it makes sense and I think that’s one of the reasons that people find it popular. And the other thing that hopefully comes across is some of these things are absurd but these people are thoughtful. They’re not crazy people.

I tried cryotherapy and man that was so cold. It was like -152 degrees and it was way more intense than I anticipated. I knew that there had been a death associated with cryotherapy but there was also people freezing their toes and things like that. So there are some things that were more extreme than I originally anticipated.

MC: Did any of the stuff give you pause?

TC: Yeah, the colonic. I wasn’t going to do that. And I also thought about doing a little bit of cosmetic surgery, maybe even just something like Botox or something like that. I decided not to. I think it is important to experience it because you want to get a sense of what people are trying. And the cryotherapy is a really good example of that. I think part of the reason it feels like it works is it is such an intense experience. So that adds to the placebo theatre.

MC: Do you think if we changed the way we thought about death it would affect the lengths we go to in an effort to hold it off?

TC: Yeah, I do. A lot of experts around the world have really thought about that and how, really, it’s a modern-day phenomenon. We’ve always tried to cheat death, but now we’re obsessed with every moment. We really do obsess and I think the idea of focusing on your quality of life will perhaps change how we think. We’re never going to live forever but I think the goal is to really focus on the quality of life and the quality of our relationships. That’s what matters.

MC: Is it actually good for us to succeed in cheating death?

TC: There’s a lot of interesting research on that question right now. How long do we want to live? And the other thing is the disparity – would this be something that was just available to the wealthy? Are we going to create more inequity through these kinds of pursuits? I think that there is sort of a rational length of time that human beings are supposed to live. I’m not sure what that is right now. But that’s definitely the kinds of questions that we want to explore.

MC: So, the inevitable question when talking A User’s Guide at Cheating Death is what you suggest we do to live as long as possible?

TC: This is a really important point. This is a multi-trillion-dollar industry that’s just growing, this wellness industry. And all of that industry, all of that money is focused on trying to tell us how to live a healthy lifestyle and how to get the most out of life. Well, we know how to do that. You don’t smoke, you get real exercise, you eat real food, you sleep, you try to maintain a healthy weight and you love someone. That’s it, that’s the magic. Everything else is kind of noise. Now of course, some of us have health issues and need healthcare but if you’re just talking about these steps that we’re supposed to take throughout our life, basically that’s it.

Click here for more information on A User’s Guide to Cheating Death.