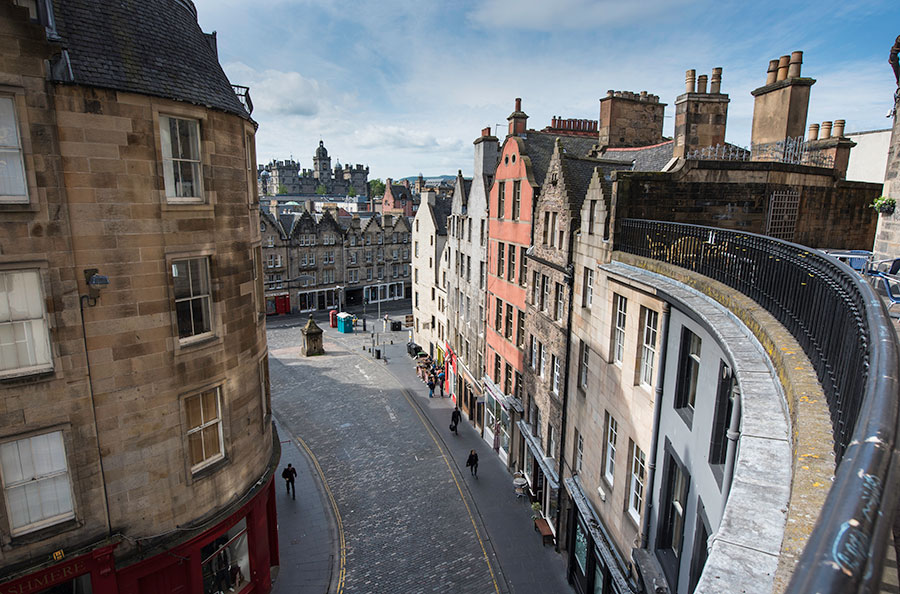 For novelist Ian Rankin and other best-selling authors, Edinburgh proves fertile ground. Athena McKenzie tours the Scottish city for visions of literary stars past and present.

Moments after arriving in Edinburgh, we have our first Rebus sighting. Amid the cheerful Saturday evening bustle outside Waverley Station, the hanging sign for Fleshmarket Close is dark and ominous. Named for a long-gone meat market, it inspired the title of Ian Rankin’s 15th John Rebus novel, in which two skeletons are found buried in a cellar floor in the close (a Scots term for alleyway that perfectly captures its claustrophobic dimensions). Surrounded by selfie-snapping hen parties and raucous fans in the green and white of Edinburgh’s Hibernian football club, my boyfriend and I stop to photograph the alley with its ancient stone staircase.

Not far away, at the end of the steep, narrow valley that divides Edinburgh’s medieval Old Town from its 18th-century New Town, floodlights illuminate the Waldorf Astoria Caledonian, a luxury former railway hotel. Rebus notes in Rather be the Devil, the latest and 21st appearance by the detective: “Those who’d grown up in Edinburgh knew it as the Caledonian, or ‘The Caley.'” The novel begins with a celebratory meal at the hotel’s real-life fine-dining restaurant Galvin Brasserie de Luxe.

Edinburgh is a city where readers stumble on connections to and settings from their favourite books. Fans of classics and genre fiction alike have made the city a literary pilgrimage, and its annual book festival in August is the largest of its kind. To recognize and celebrate

Edinburgh’s status as a literary pioneer and capital, it was designated the world’s first UNESCO City of Literature in 2004.

With so much to take in, we decide on an immersive experience, spending our first full day bookending our Sunday roast with the Book Lovers’ Tour and the Literary Pub Tour. Edinburgh’s inherent duality in geography and nature—and how that is reflected in its literature—is a recurrent theme on our tours and is perfectly exemplified by the contrasting tones of the tours themselves. The first, led by Allan Foster, author of The Literary Traveller in Edinburgh, is a more traditional excursion and takes visitors through the maze-like back streets of Old Town. The latter is an interactive improvisational performance, where we watch our “guides,” Clart and McBrain, two modern barstool philosopher-type characters created for the tour, debate the true nature of Edinburgh’s literary past, as we follow them from pub to pub.

With time to spare before our rendezvous with Foster at the Writers’ Museum, we aim for coffee at The Elephant House, the cafe near Greyfriars Kirk where J.K. Rowling wrote much of the early Harry Potter books, inspiring writers in coffee shops the world over. (It’s said that Rowling found inspiration for many of her characters’ names in Greyfriars Kirkyard, the Edinburgh graveyard.) Our aim is off. Old Town is built on a rocky crag, with the castle perched at the top and the main artery, the Royal Mile, leading away from it.

Because of the hilliness, streets we read on our map as crossing are actually above or below one another—I blame jet lag. Suddenly, we’re three storeys above our planned route, looking down at the place we need to turn. After puzzling our way through stone alleys and stairways, we know we’re getting close when we spot a gaggle of people in robes waving wands, but by then it is time to get to the tour.

Luckily the Writers’ Museum is nearby, just off the Royal Mile in Makars’ Court, where the slabs are inscribed with quotes from Scottish literature. The museum is dedicated to the works of the poet Robert Burns, Sir Walter Scott and Robert Louis Stevenson. (Both tours spend time in the atmospheric court, though the pub tour starts at the Beehive Inn in the Grassmarket, where Robert Burns supposedly bet on cockfights.)

Along with Burns’ writing desk and a first edition of Scott’s Waverley—Edinburgh is possibly the only city whose train station is named after a novel—the museum features a wardrobe made by one Deacon Brodie and owned by Stevenson. Brodie, a cabinet maker and city councillor, was executed before a crowd of 40,000 after it was discovered he was also a prolific burglar. Popular belief is that Brodie had a hand in designing the gallows on which he was hanged. Brodie’s double life, bourgeois gentleman by day and conniving criminal by night, is said to be the inspiration for Stevenson’s novella Strange Case of Dr. Jekyll and Mr. Hyde.

Brodie lives on in the popular Royal Mile pub that bears his name, and what he represents continues to capture the imagination – during the pub tour, Clart continually espouses Edinburgh’s misbehaving, more indulgent literary past, while McBrain praises the academic and literary side.

“Stevenson was exploring the hypocrisy of the individual and, as Stevenson said, ‘Man is not truly one but truly two.’ But we are not one or the other—we are both. Edinburgh is both,” Clart says.

This duality of the city inspired Rankin to start writing the Rebus series. “What I wanted to do was update the theme of Jekyll and Hyde and show how Edinburgh should have been the setting,” Rankin shared in an earlier interview with Zoomer. “Dr. Jekyll and Mr. Hyde was written by an Edinburgh novelist, but he chose to set it in London. I don’t know why because it’s a very Edinburgh book.”

Crime fiction does have deep roots in the city. From the museum, Foster leads us to the University of Edinburgh, where Stevenson attended with another famous student, Sir Arthur Conan Doyle. Here, Doyle studied to be a doctor under the esteemed Dr. Joseph Bell, an eccentric professor and pioneer of forensic medicine who emphasized the importance of close observations when making medical diagnoses. Bell was known to wear a long coat and a deerstalker cap. Sound familiar? While Doyle never achieved the same acclaim in the medical profession as his celebrated teacher, he did leave a rather significant mark in the writing world. “You probably have the fact that Conan Doyle was a crap doctor to thank for Sherlock Holmes,” Foster cracks in his Scottish brogue.

Though it is off the tour route, Foster suggests any Sherlock pilgrims take the time to visit the statue of the detective at Picardy Place, at Doyle’s birthplace. The house is now demolished, but The Conan Doyle pub nearby is a veritable shrine to the author.

Foster’s tour takes a meandering route to Greyfriars, and the walk is accompanied by stories that cover writers from Peter Pan scribe J.M. Barrie to the prolific Alexander McCall Smith, author of the No. 1 Ladies’ Detective Agency series and neighbour to Ian Rankin.

It’s Rankin we’re looking for when our evening pub tour winds up in New Town, in the warm embrace of Cafe Royale, an ornate drinking establishment with a wooden bar, high ceilings, globe lighting and ceramic art. Rumour has it the author can sometimes be spotted enjoying a pint.

There’s no Rankin sighting on this outing, so the next day we head to the ultimate Rebus destination: The Oxford Bar. Rankin’s “local,” it’s used as the basis for Rebus’s preferred haunt.

“A pub like the Ox was about so much more than just the hooch. It was therapy and refuge, entertainment and art,” says Rebus in The Hanging Garden.

We get our pints and retreat to the back room, where a few framed photos of Rankin are the only nod to the pub’s fame.

“No sign of our man today,” shares a grey-haired woman drinking a pint as she folds some newly purchased baby clothes. The Oxford regulars are used to fans popping in for a poke about.

That a dark and gritty series like Rebus can inspire fans to visit its locales might seem strange. As Rankin himself notes in Rebus’s Scotland, “In the early days, reviews wrote of my work that it was unlikely to be recommended by the local tourist board.” But the curmudgeonly detective has achieved iconic status, with the series selling more than 20 million copies and inspiring two television adaptations. This year marks 30 years since Knots & Crosses, the first Rebus book, and Rankin and his publisher have announced plans to mark the anniversary with RebusFest, a festival of literature, music, art and film—curated by Rankin—in Edinburgh at the end of the month and into July.

Coincidentally, 2017 is also the Year of Literary Heroes, Visit Britain’s celebration of all things bookish (www.visitbritain.com), with festivals around the U.K. to mark milestones such as the 20th anniversary of the first Harry Potter book, the 200th anniversary of Jane Austen’s death and the 125th anniversary of The Adventures of Sherlock Holmes. Of course, it’s all the perfect opportunity to celebrate this literary hero, the city of Edinburgh itself.

On our last evening, walking from the castle down the Royal Mile toward Waverley Station, we take a shortcut through the stony confines of Fleshmarket Close, stopping midway for our last Scottish pints at Halfway House, which bills itself as the city’s smallest pub. Two locals, easily in their 80s, sit staring at the bar. I recall in Rebus’s Scotland, Rankin shares that some of his favourite descriptions from his books involve bars and people drinking, citing a passage from Knots & Crosses. “Old men sat with half-pint glasses, staring emptily towards the front door.”