She’ll Be Back: Linda Hamilton, 60, Returns To Terminator Franchise 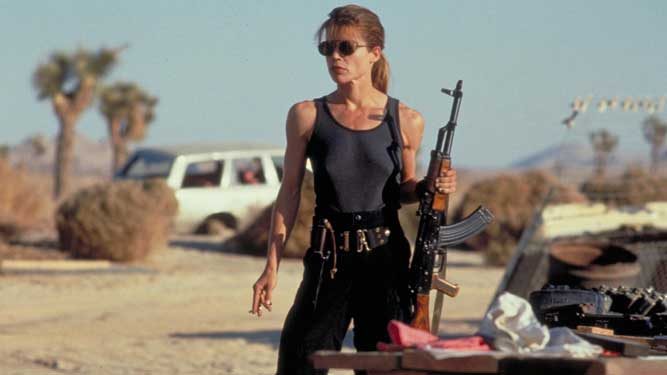 A few weeks after Canuck movie god and self-professed King of the World, James Cameron, caused an Internet maelstrom dissing Wonder Woman, he announced that not only will there be a new installment in the Terminator franchise but that original star, Linda Hamilton, will reprise her role as Sarah Connor.

The actress is now 60, so this marks a first for an action movie franchise to have an aging female lead. Hamilton, it should be noted, is also one of Cameron’s ex-wives and was on his arm when he attended the Oscars for Titanic. After his win for Best Picture Cameron made his “king of the world” pronouncement during an acceptance speech. They divorced shortly thereafter.

In his August interview with The Guardian he said, “All of the self-congratulatory back-patting Hollywood’s been doing over Wonder Woman has been so misguided. She’s an objectified icon, and it’s just male Hollywood doing the same old thing! I’m not saying I didn’t like the movie but, to me, it’s a step backwards. Sarah Connor was not a beauty icon. She was strong, she was troubled, she was a terrible mother, and she earned the respect of the audience through pure grit.”

Then at a press event announcing Hamilton and Terminator he had this to say: “It’s going to make a huge statement to have that seasoned warrior that she’s become return,” Mr. Cameron said at an event announcing the casting, according to the Hollywood Reporter. “There are 50-year-old, 60-year-old guys out there killing bad guys, but there isn’t an example of that for women.”

Guess he’s putting his money and talent where his mouth is.