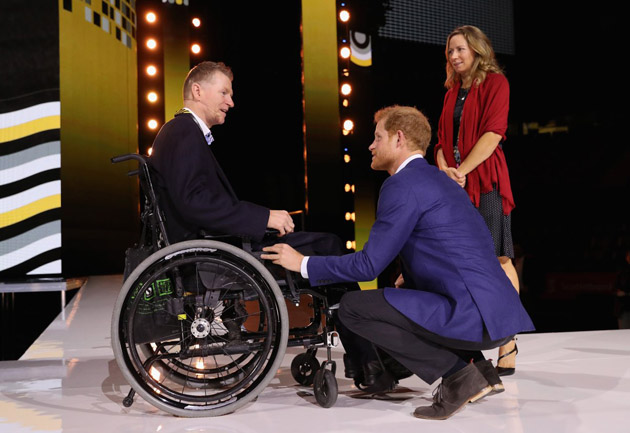 Let the games begin! The 33-year-old royal took part in the 30-minute ceremony at Nathan Phillips Square on Friday.

Dozens of onlookers gathered in Toronto’s financial district to catch a glimpse of Prince Harry as he arrived at Nathan Phillips Square to witness the flag raising ceremony for his Invictus Games. For the most part, the royal remained in the background, seemingly determined the keep the focus of the 30-minute ceremony on the event and participating athletes.

The National Flag Tour, which started on August 16, visited 22 Canadian Armed Forces bases, 15 legions and more than 50 communities across Canada to raise awareness of the sporting competition established by Prince Harry in 2014. The annual international event contributes to the emotional and physical healing of wounded veterans. This year’s Games includes 550 competitors and their families from 17 competing nations. The flag tour also gave Canadians intimate access to the Games, says Andrea Poptsis, CFO of the Invictus Games. “This really gave people an opportunity to come out in their communities and really acknowledge the struggle of the ill and injured soldiers that are trying to get back on their feet.”

The #InvictusGames flag being raised at city hall. #IAM pic.twitter.com/B5Id2kfj64

Prince Harry was on hand during the flag raising on Friday and will remain in Toronto until the closing ceremony on Saturday, September 30. His busy schedule also includes talks with Prime Minister Justin Trudeau and a visit to a mental health and addiction teaching hospital. It was his role as helicopter pilot in Afghanistan, which included airlifting injured soldiers to hospital, that gave Prince Harry a newfound sense of purpose. “I convinced myself for 10 years that, while I was there, I was one of the lads,” he told the British press. “I was doing a job and I had a role. How, I thought, do you ease their [the soldiers’] trauma and give new meaning to their shattered lives? Then it hit me—sport.”

Prince Harry shares why he created the #InvictusGames and the impact they have on the recovery journey of hundreds of WIS around the world pic.twitter.com/rAexyrBFig

This year, during the eight-day Games, the 33-year-old royal will visit various training sessions around Toronto and watch competitors participate in all 12 sports, including cycling, archery and wheelchair basketball.