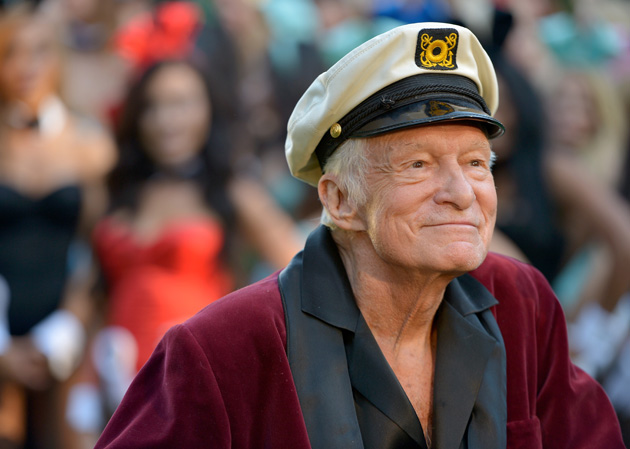 Hugh Hefner, the divisive figure who entirely transformed the magazine industry by bringing sex and nudity into the mainstream, has died.

According to Playboy Enterprises Inc., Hugh Hefner died Sept. 27 in his Los Angeles home of natural causes. He was 91.

Hefner was born in Chicago on April 9, 1926, to Glenn Hefner, an accountant, and Grace Hefner, a teacher. Both parents were staunch conservative Protestants.

“My folks were raised pure prohibitionist,” Hefner told The Hollywood Reporter in 2011. “They were very good people, with high moral standards—but very repressed. There was no hugging and kissing in my home.”

After a stint in the U.S. Army as a writer for a military newspaper during the Second World War, Hefner held down a regular job as copywriter for Esquire magazine. It was there that he first contemplated publishing his own men’s magazine.

The silk-robed, cigar-chomping Playboy founder first started the magazine in 1953 with $600 of his own money and thousands of dollars borrowed from friends. Within years, Hefner built a multi-million dollar entertainment empire that hit its peak in the 1970s, all while surrounding himself with a bevy of beautiful woman—many of whom wore his publication’s trademark bunny ears.

In its heyday, Playboy boasted a circulation of seven million and a brand identity that expanded into TV shows, themed celebrity events and invite-only parties at the legendary Playboy Mansion.

Although “skin magazines” had already been in existence for decades, Hefner found a new angle: his photo spreads focused on everyday women, from students and secretaries to stewardesses and housewives, to break down social taboos surrounding female nudity. Yet, for all the finger-wagging the nudes provoked from many in the private and public spheres, Playboy also contained real journalism (cue the famous “I read Playboy for the articles” expression) and offered “liberation from religious-based strictures.”

Hefner knew exactly how to cater to his target audience—by structuring his publication around the topics that directly fascinated him and men his age. The post-war baby boom audience was more than receptive, thanks to the advent of the pill and gradual breaking down of sexual barriers. Despite its reputation as just another “skin mag,” the nudity only made up 10 percent of each issue—the rest featured topical pieces written by the likes of Truman Capote, Ray Bradbury, Joan Didion, James Baldwin and Canadian literary scribe Margaret Atwood.

Hefner openly championed equal rights for women, homosexuals and the black community in a time when few publishers would risk the ire of its readers by highlighting such topics in their editorial pages.

The magazine managed a complete takeover of mainstream media despite vocal opposition from politicians, religious leaders, feminists, the FBI and the U.S. Securities and Exchange Commission.

Despite its waning popularity in recent years, the parties at Playboy Mansion retained its legendary status well into the late 1990s. In 2016, Hefner sold the mansion. He’d purchased it in 1971 for $1 million dollars—and sold it for $200 million.

Hefner is survived by children Christie and David, born to first wife Millie Williams, and sons Marston and Cooper from second wife Kimberley Conrad. At his time of death, he was married to 31-year-old model Crystal Harris.