And the Giller Prize Final Five Are… 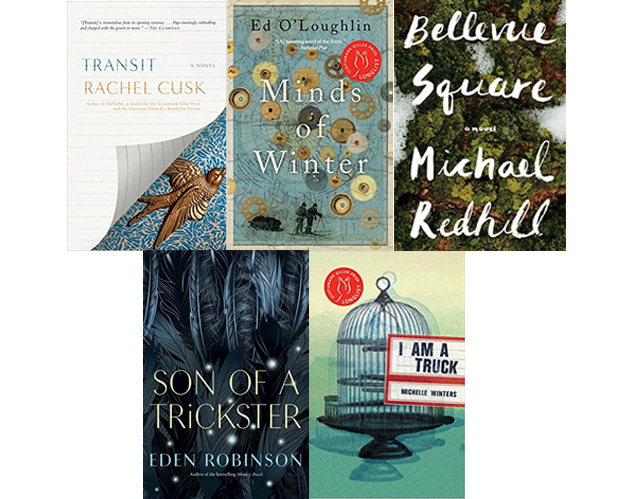 The five finalists for the Scotiabank Giller Prize — Canada’s richest literary award — were announced this morning and include two first-time nominees.

The list of finalists for the 2017 Scotiabank Giller Prize narrowed to five this morning with the announcement of the shortlist for one of Canada’s most prestigious literary honours. The final five are:

Transit, by Rachel Cusk, about a writer forced to confront the realities of her life following a family tragedy and move to London with her young children.

Minds of Winter, by Ed O’Loughlin, which follows two people looking for answers to familial mysteries in the Arctic Circle who eventually discover that their own histories, as well as events greater than both of them, are intertwined.

Bellevue Square, by Michael Redhill, a comedic thriller in which a Toronto woman’s search for her doppelganger turns deadly.

Son of a Trickster, by Eden Robinson, the first in a trilogy about a teen with strange powers trying to hold the pieces of his personal life together amid a fractured familial existence.

I Am A Truck, by Michelle Winters, a debut novel about the love, relationships and mysteries that one woman encounters during the search for her missing spouse.

Cusk first made the cut as a Giller finalist in 2015 with her novel Outline while Redhill made the shortlist in 2001 for his debut novel Martin Sloane, which also picked up the Amazon.ca/Books in Canada First Novel Award. Robinson’s Monkey Beach was up for a Giller in 2000 while O’Loughlin and Winters are first-time nominees. It’s also the first Giller nomination for Invisible Publishing, the Picton, Ont.-based publishers of I Am A Truck.

This year’s contest marks the first without founder Jack Rabinovitch, who passed away in August at age 87. The winner of the $100,000 prize – the richest literary award in Canada – will be announced Nov. 20.