One-on-One with Kazuo Ishiguro, Winner of the 2017 Nobel Prize for Literature 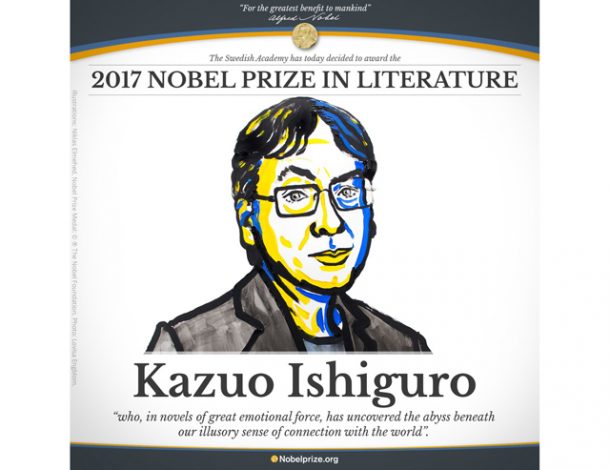 Kazuo Ishiguro, the award-winning British novelist hailed as one of the greatest writers of his generation has earned another honour to add to his list of accolades: the Nobel Prize for Literature. The 62-year-old was revealed as the 2017 recipient of the prize this morning, alongside the declaration that he, “in novels of great emotional force, has uncovered the abyss beneath our illusory sense of connection with the world.”

Contacted by the BBC following the announcement, Ishiguro, who’s had four of his seven novels nominated for the prestigious Man Booker Prize (with one, The Remains of the Day, winning), been anointed with the OBE by the Queen, celebrated by foreign nations with their highest literary honours and seen his books made into renowned films, told the outlet that, “It’s a magnificent honour, mainly because it means that I’m in the footsteps of the greatest authors that have lived, so that’s a terrific commendation.”

Zoomer spoke with Ishiguro in 2015 from his home in London, England, as he prepared for the release of his most recent novel, The Buried Giant, discussing the book, writing older characters and what he’s learned about aging as an artist from Leonard Cohen.

The story behind his now famous remark that The Buried Giant took 10 years to write in part because his wife didn’t like the first draft, compelling him to toss it out and start over…

“I blurted that out at [a literary festival] in October or November of last year and my wife hasn’t quite forgiven me for that. [Laughs] It’s been 10 years but to be honest it’s not that unusual. I published a book of short stories in the middle. So it’s my usual rate – I usually publish every five years or so.

“Around 2004 or 2005, when I finished writing my previous novel, Never Let Me Go, I started to write this. And I was quite pleased with it. I was about 60 pages in, I’d been working on it for about a year, but I guess a part of me was slightly nervous. It was a world I’d never set a novel in before. I was just looking for little encouragement, you know? [Laughs] It was more or less the same story but [his wife] said, “You’ve got to start again. There’s nothing from this you can keep. It’s not that you just have to tweak this or that. You’ve got to start again.” She did say it’s a fascinating idea. But the fierce point that she was making is that there was something badly wrong with the language – the language in which the characters spoke to each other was wrong and the language in which it was narrated was wrong. So this was kind of tough, and I didn’t really have the energy to … just start again. So I did put it aside and I worked on my short story cycle book. Then I went back to this novel and this time around I used a completely different kind of language.”

Sticks and stones may break his bones…

“I generally appreciate frank opinion and in fact this is something, in a way, that I miss more and more. The bigger my reputation gets, the less willing people are to talk frankly to me because they’re kind of intimidated or they think they’ll lose their job or that I’ll throw a tantrum and be awful or something … But my wife has known me since before I was a writer and I think this is very important. She saw my first attempts to write … When someone makes a criticism, no matter how painful it is, there’s criticism that you recognize, somewhere deep down, is right, because you always had that kind of doubt about it. And I have absolutely no doubt that [his wife] was right.”

Crafting the unique language of The Buried Giant…

“This book is set in a strange world way in the past … I was trying very hard in my own way to come up with some sort of ornate, archaic, deliberately anachronistic kind of language that would be suitable to this period. The second time around I did actually the opposite – I went for a very, very simple language. I took English and I found that by taking out certain words like “that” or “of,” it then became oddly stilted and oddly foreign but still seemed to be kind of understandable. In a way it kind of had its own lyricism. It’s economical as well.

“In both of these cases … people were living together in peace and then suddenly they seemed to discover or rediscover the hatred between their communities that go back generations and well into history. Why had the memories disappeared in the first place and why did they suddenly come back like this?

“And I got very interested in that question around that time … And it occurred to me that if you think of any nation, any community, there are dark parts of the past that have been kind of suppressed … in order to maintain the stability of the society, to stop it from descending into civil war or cycles of violence … And that was really the starting point, thematically, of this book … I wanted to see how societies remembered and forgot things. And when is it better to remember, when is it better to forget? When does remembering too much mean it just leads to war and hatred? … It occurred to me that exactly the same dilemma applies to marriage, or any long-term relationship, father-son or father-daughter or siblings. So that’s how I ended up with this novel. And I figured out a way in which the story could connect both a couple and a society at war with its own memories.

Why, as a young writer, he liked writing about older characters…

“When I was a young writer, perhaps unusually I tended to write about older characters. I was kind of doing a thought experiment, in a way, saying, “Well what would I think of myself now when I’m an older person looking back on myself? What are the things I need to warn myself about?” It was a way of getting a perspective on myself and my generation. I have a Japanese background and had I been one generation older I’d have been part of that sort of militaristic fascist fervour. I often used to talk to Germans of the same age and they would say the same thing – they’re slightly haunted by this idea (of) what would they have done had they been their parent’s generation? And I think that feeling often made me take a step back when I was caught up in the fervour of my own generation …

“But as I got older, and now I’m nearly the age of my old narrators from when I was younger, paradoxically, I find myself often looking at younger people. I think I always find it interesting to write about characters who are quite distant from me, both in experience and age to some extent. Somewhere deeper down there’s obviously a part of me that’s being channelled through those characters.”

On his claim that many writers peak in their 30s…

“It wouldn’t surprise you to learn that I made that remark first when I was in my 30s. [Laughs] And it’s come back to haunt me.

“When I was young, what struck me was that there was a danger that writers in their 30s could actually be patronized, talked down to, simply because of their age. People often talk about “young” writers and “promising” writers, as though novelists peaked in their 60s. I saw several dangers in this because I could see that many novels have been written by writers in their 20s or 30s. Most of the Great American novels in the first half of the 20th century were written by people younger than 40. So the danger that I saw when I was young was that writers of that age would think, “It’s okay, I’ve got plenty of time. I’ll write my really big ambitious great novel sometime later.” And also the whole establishment seemed to reinforce that idea – prizes for promising young writers for people under 40. So it was actually a genuine revelation for me to think I might be at the peak of my powers (at) 35-36. And I wanted to say to other writers under the age of 40 or 45 that you’ve got to really go forward … But I’m not implying that you cannot write very, very fine novels when you’re older.”

On Leonard Cohen, “late style” and playing to your strengths as you age …

“I was listening to Leonard Cohen’s latest album (Popular Problems) – I was absolutely staggered by it, that a guy can do that at that age. There’s one particular song called “Did I Ever Love You?” I think it’s one of the greatest songs he’s ever written. He’s changed. He’s not trying to just be a kind of version of himself when he was younger … And so I think it’s important to change and adapt, both stylistically and thematically. I’m really interested these days in looking at late style, because I’m coming into my late style period.

“Cohen is an exemplary example of brilliant great late style. It’s just the ability not only to perform at that level, but to keep producing these incredible songs. He’s moved on and he hasn’t tried to just do (things like he did) 30 years ago. He fully occupies where he is now and the work comes out of that. So I’m looking at these people who are maybe 20 years older than me and I’m trying to kind of not make the mistakes some of them have made and follow the great examples of some of the great artists.”