Measha Brueggergosman Talks Her New Memoir “Something Is Always On Fire” 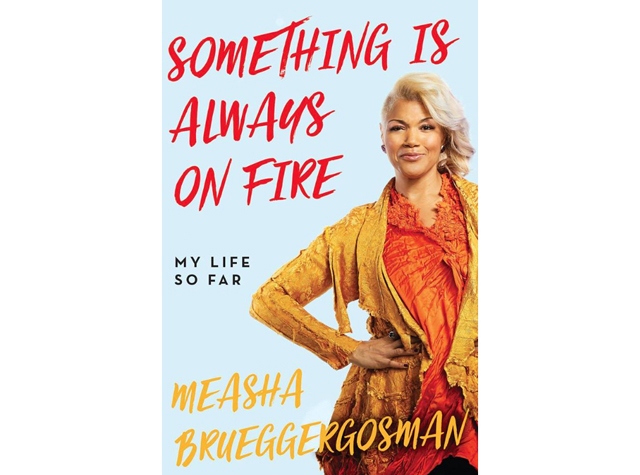 She’s one of Canada’s preminent classical voices, a New Brunswick-born soprano who’s toured the world and performed before audiences ranging from the Olympics to Queen Elizabeth II. And yet some of Measha Brueggergosman’s most compelling tales take place off stage and away from the recording studio.

Brueggergosman, 40, who admits she’s never read a memoir, has written one of her own, Something Is Always On Fire: My Life So Far, in which the mother of two young boys recounts both the misery and the miracles, from love and loss to tales of adultery, debt, health struggles, motherhood and faith, all in her trademark candid tone. We met at a downtown Toronto hotel recently to discuss her dishing all her personal details in the book and, by the end of the interview, even came up with the premise for the sequel. Hint: it involves a utopian world and a bionic Brueggergosman…

MIKE CRISOLAGO: How do you compare the excitement and the anxiety of releasing a memoir to releasing an album?

MEASHA BRUEGGERGOSMAN: Oh, who cares about the albums? Please. Compared to this? This birth is different from all my previous births, because it just started in my own mind … It’s of course far more personal, but it helps to have released things into the wild before. So I know how to cope, which usually comes down to leaving the country and not reading one thing, ’cause I’m too thin-skinned to invite the opinions of people who don’t know me, even though the book tells so much about me. It’s a funny thing. I don’t know how I’ll react to this kind of scrutiny over this kind of thing.

MC: And I feel like you kind of have to live through one to appreciate the other.

MB: You’re the first man who has interviewed me who understands the math of how much misery and struggle. But then there’s, on balance, quite a lot of joy in triumph. I think it’s difficult, sometimes, and the best men are so protective. And I think it’s hard because I’m pretty, so it’s also difficult to reconcile pretty people doing ugly things. But you know, God looks at the soul of a man. And I like to be pretty and I am soft and pink, but I have the head of a man and the heart of a woman, so I can’t concern myself with what people think, because I’d probably just end up in the fetal position in the corner.

MC: Why was it important to put all of these personal stories out there?

MB: Well, I don’t think you become a wise woman unless you do a tremendous amount of stupid things. And stumbling into place still has you in place. You still get there. I know that there have been missed opportunities and roads not taken and bad decisions and regret, but the regret doesn’t define me and I can’t seize my future if I keep looking behind me. So it’s almost like you tell all the truth you can so that it’s balanced with your own liberation, because it does set you free. No one will ever be able to whisper some scandalous secret to my sons, because it’s all in the book. I have neutralised it. So I exist between wanting to be accountable to my sons and the pride of my parents. And I think I would want to raise sons who would be proud of this kind of truth-telling, and my parents certainly did raise me to tell the truth, but they also taught me the value of an artful lie.

MC: And you wrote the book, not a ghostwriter.

MB: I did start my process once I realised that I wasn’t going to be able to use a ghostwriter, because I just couldn’t. It didn’t sound like me, because it wasn’t me. And it’s nobody’s fault, ’cause I just really was hoping I could just take the money [Laughs] and just retire to Stouffville. Your money goes far in Stouffville … So it was literally, “dammit.” So I went to Banff and I committed to writing, first thing, two hours, just about anything – whatever came to my head, just how to find a way to link thought in my own voice. I loved that process, ’cause I love rehearsing, too. I love the process of getting to the thing. The book is the best part. It’s like the cherry. But the peak of the mountain is only the peak because of the majesty of the rest of it. So I got the other part. Like, I got the mountain; you guys got the peak.

MC: It’s the journey, not the destination.

MB: Yeah. I was trying to avoid saying that.

MC: So given you don’t read memoirs and nonfiction, what was your inspiration when you were writing this?

MB: I really thought about who would be reading it, who I wanted to be reading it. And I thought, “Who would be hindered by me not telling the whole truth?” Because there’s going to be people who will be so grateful that I said all that I said, because it allowed, in the open space, what they have been struggling with … Now they’re immediately made comfortable by the fact that I clearly cannot judge them. It’s so obvious that I do not sit in a place of judgement. I always have mud on my face. I still am gorgeous, and probably because of the mud, rendered that much more free. And it’s the best weight loss program ever.

MC: This book is 40 years of your life and successes and the times you fell short. So if part two comes out 40 years from now, when you’re 80 years old, what do you hope you’ll be writing about and telling the world about then?

MB: First of all, I would rather one of my sons wrote it. Second of all, I would hope I wouldn’t have time to write it. I’d hope I would be in the position to give the proceeds to charity. Do you know what I mean? So … in 40 years, I pray that books are still around in physical form, ’cause they’re beautiful things. But it’s probably going to be like a sci-fi thriller about a woman who sold all her body parts to science and replaced them with bionic super-limbs and she’s saving the world. There are no more orphanages, because all the children have been wanted. So I would be curing diseases we’ve not even heard of yet, because we’ve finally come to our senses and reversed climate change and we’re rendered sickless. We’re absolutely in perfect health and illness-free. So the book that is being written is just a reflection of how we came to be there.

MC: So it’d be called, “Nothing is on Fire Anymore: The Sequel”.

MB: Nothing Was Ever On Fire. What was I thinking? My life at the end.

MC: I wanted to end by asking you about a quote from your book where you write, “The aging opera singer can be a beautiful thing, but it can also be a bastion of bitterness and regret.” What does turning 40 and aging means to you?

MB: Well, if you build nothing but albums and a collection of programs from performances that are gone and will never come back, and if you consider that your family, then you’re going to die alone. And that’s all that this career is. As spiritually satisfying as it is, at the end of the day it takes far more from you than it gives you. So you aren’t to collect currency in that country. So you have to shore out things in heaven where there is no illness or decay. So the closest thing to that on Earth is your relationship with God as a filter through which you approach all interactions. Everything done with the joy of the Lord, with the strength of the Lord as your strength and in service, because it has to mean something. And I choose for it to mean service to my Maker. And that’s my choice.

MB: You’re welcome. That was fun.

MC: I look forward to meeting in 40 years. We’ll talk about “Nothing Was Ever On Fire.”

Something Is Always on Fire: My Life So Far is available in stories and online now.