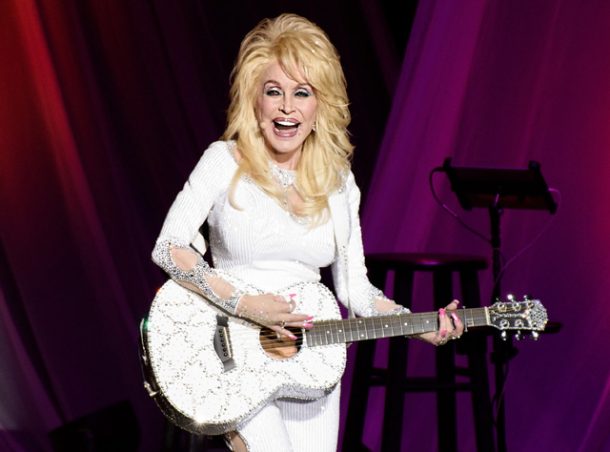 From chart-topping tunes to earning the title of most honoured female country performer of all time, there’s nothing Dolly Parton hasn’t done. Well, almost nothing. On Oct. 13 the 71-year-old marks a milestone in her 50-year recording career with the release of her first ever children’s album, I Believe In You, complete with original songs covering subjects ranging from responsibility to friendship to sharing and bullying.

“I’ve been writing children’s songs for years. I’m surrounded by children from a big family and then with my literacy program, the Imagination Library, where we give books to children from the time they’re born until they start school,” Dolly told me over the phone recently, noting the charity initiative, which she began in 1995 to honour her father, who never learned to read, was set to hand out its 100 millionth book, giving her the idea for an album. A kid’s album is a natural fit for the former Zoomer cover subject, who already has a foothold in the pint-sized demo. Aside from her appearances on the hugely popular children’s show Hanna Montana, which starred her goddaughter Miley Cyrus, Dolly notes, “a lot of it has to do with some of my fans from the early days and when they had kids they heard my music because of their mom did or their dad, and then they had grandkids. I’ve kind of been in their houses about as long as their relatives have.”

Her new album isn’t all Dolly has on the go, however, as she also gave Zoomer the low down on possible future projects and her secret to staying active at 71.

MIKE CRISOLAGO: Over the last 50 years you’ve written countless hit tunes. What are the main differences between writing songs for kids as opposed to adults?

DOLLY PARTON: Well it’s more fun to write songs for children … You have to be smart when you’re working with children because you want to make sure the message is the right one and you don’t stray too far from it. But you also want to have it singable and fun – something that they can learn and grow from. It kind of lets me be a kid again and go back into that place and time for myself, especially when you’re older. It’s really kind of rejuvenating and energizing to me when I write the children’s songs because I try to think of the children and I become a child.

MC: Are there certain messages that you are writing now for these kids that you wish you had heard when you were growing up?

DP: One of the songs on the album is about bullying. It’s called “Making Fun Ain’t Funny.” And it was kind of based on the fact that when I was growing up the kids laughed at me and my little coat of many colours and it was painful. But also this day and time kids bullying other kids and causing all kinds of hurt and problems to the point of making some children commit suicide. And I thought I need to address this bullying thing, but do it in a fun way and in a way that they can understand.

MC: What do you enjoy about performing live for kids?

DP: It’s less nerves. It’s fun, because you’re the big one and so they’re looking to you. I’ve got a little child’s voice, my voice is high-pitched and I’m an excitable girl, and when I get with kids I just become one of them. So my voice is suited for it, for the songs, and for talking and playing with kids. And my look is suited for it because I look like Mother Goose or the fairy godmother or one of those overdone characters. So kids focus on me, and then the fact that they can feel that I care for them, and that I’m there for them. It’s actually magical when I work with kids. I love it.

MC: Given this is your first children’s album in a five decades career, what other firsts do you hope to explore in the future?

DP: I want to do a great inspirational album with uplifting songs, something to just be bright and happy and giving a little more hope. I’ve been trying to figure out what I want to do for a next move musically after this children’s album. But in the meantime I’m still writing my life story as a musical for either a feature film or for the stage. And I’ve got that done, I’ve just got to start putting it on its feet and seeing what I have. And so I’m hoping to do that within the next few months. And I want to have a line of cosmetics and wigs and clothes. I want to start with my brand, doing more things like that. So I’ve got lots to do and a short time to do it in. I’m having to hustle. I wish I was 30 again so I’d have more time to get more done.

MC: And when you were in your early 30s you had a massive musical and cinematic hit with 9 to5. Last month you appreared at the Emmys with your co-stars from that film, Jane Fonda and Lily Tomlin and got such an incredible reaction.

DP: I know. We got a standing ovation. We were really proud.

MC: Does it surprise you that, almost four decades on, the film and its trio of stars remain so popular?

DP: Well actually I wasn’t surprised. Of course that’s the first time we’ve been together like that. But I just figured that night, since we were all three nominated for an award, it made sense that we would go out and present an award together. And [the crowd] stood up it was like, yes. You see that movie, they added a Broadway musical – wrote the music for that. And then they did a series of it right after the movie, and my song has become such a big hit through my tours. So it’s just one of those things that keeps on going. But it was a big thrill to walk out and kind of experience that again.

MC: So as you move forward, with so many irons in the fire and goals for the future, what advice would you give to people in their 60s, 70s and beyond for staying active, healthy and productive?

DP: I think that we need to stay young at heart, young in spirit. And we need to be active, and we need to think more like children. We need to remember what it was like when we were young. And doing this album and writing this album and singing it and working with all these children, it made me feel young and it made me happy. And so I would just say, don’t think old. Don’t worry about it. The only time I ever feel old, or feel my age, is when I’m physically sick. Otherwise I just won’t give in to it. So just stay active, stay fun, do fun things, think fun thoughts, read fun books. Don’t just be drab and dull.

I Believe in You is available in stores and online Oct. 13. Proceeds from the albums sale benefit The Imagination Library.