Gord Downie Passes Away at 53 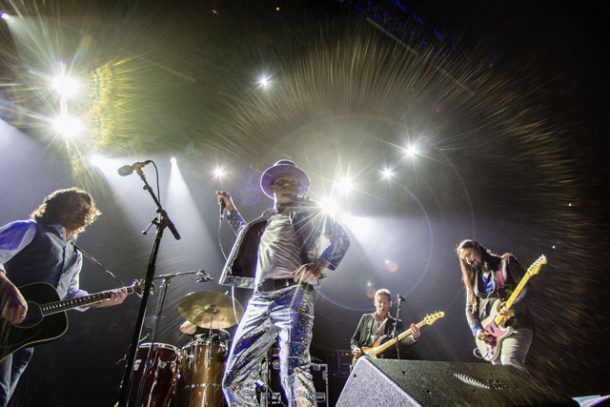 Gord Downie, the front man and lyricist of beloved Canadian rock band The Tragically Hip, whose terminal brain cancer diagnosis prompted a national rally of support and tributes over the past year, has died. He was 53. A statement on the band’s website said that Downie passed away on the evening of October 17, surrounded by family, including his four children.

“Gord knew this day was coming – his response was to spend this precious time as he always had – making music, making memories and expressing deep gratitude to his family and friends for a life well lived, often sealing it with a kiss … on the lips.”

After revealing his cancer diagnosis in May, 2016, Downie got to work on a number of projects close to his heart, including a final cross-Canada tour with the Tragically Hip last summer, a Juno Award-winning multimedia project Secret Path, highlighting the plight of Canadian Indigenous communities and the effects of the residential school system and a new solo album of original material, Introduce Yerself, which is set for release in October. In 2016 Downie became the first entertainer ever to be voted Canadian Press Newsmaker of the Year while the Assembly of First Nations dubbed him “Man Who Walks Among The Stars” last December. His activism on behalf of Indigenous communities also earned him the Order of Canada in June of this year while in July, Downie made one of his final public appearances at We Day Canada in Ottawa, where he spoke alongside Prime Minister Justin Trudeau and the family of Chanie Wenjack, the Indigenous boy whose death while attempting to escape a northern Ontario residential school in 1966 is revisited in Secret Path. A documentary about the Tragically Hip’s final tour, Long Time Running, which debuted at this year’s Toronto International Film Festival, hit theatres across Canada in September and will receive a national broadcast on CTV on Nov. 12.

Friends and fans took to Twitter upon hearing news of Downie’s passing to share their love for a true giant of Canadian music and culture.

There will never be another one like you, Gord. Rest in peace my friend.

Canada has lost one of its greats. We knew it was coming but that doesn’t make it any easier to bear. RIP, Gord Downie. pic.twitter.com/KkZsPomAuO

Heartbroken to hear of death of Gord Downie. He wasn’t just an amazing artist he was caring loving guy who knew a better world was possible

Gord Downie you are a beautiful man, a brilliant artist and a loving friend. You live forever in the music & memories you left in our hearts

Gord Downie was an inspiration to us all. His music is an essential part of the soundtrack of Canada. His diagnosis was heartbreaking but he faced illness with courage and a commitment to continue doing what he loved. He will be missed.

I think I speak for all people in Ontario in saying we are heartbroken. With Gord Downie’s passing a piece of Canada has died.

You knew it was coming.
You hoped it never would.

Remember, No dress rehearsal. This is our life.

Gord Downie. Another brilliant, wonderful soul is gone. Deepest condolences to the family. RIP Gord. Thank you for everything you gave us. pic.twitter.com/nkJ1Uu6yxd