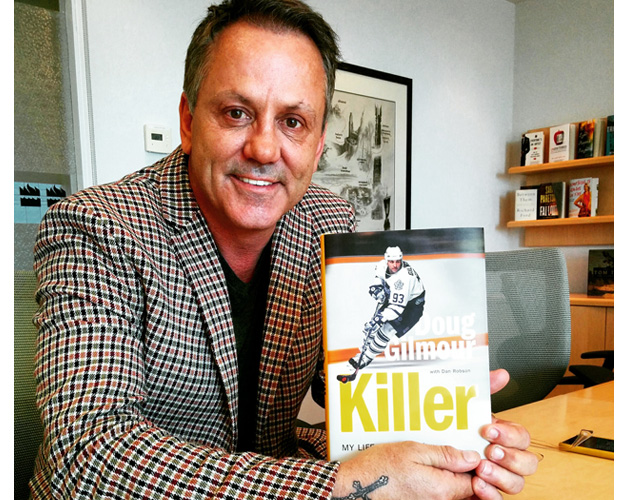 The 54-year-old puck legend discusses his Hall of Fame career in revealing new biography, Killer: My Life in Hockey.

It’s been 14 years since Doug Gilmour skated in his final NHL game. Time flies, doesn’t it?

It seems like just yesterday that the small (by hockey standards) scrapper from Kingston, Ont. was winning a Stanley Cup with the Calgary Flames and breaking franchise records with the Toronto Maple Leafs, a team he captained from 1994 to 1997.

According to Gilmour, ever since that last game in 2003, when he tore his ACL during an on-ice collision in his first—and, ultimately, last—game back with his beloved Leafs, he’d been hounded by publishers to pen a “tell-all” about his prolific hockey career in which he finished with 450 goals and 964 assists in 1,474 games. Yet each time someone came calling, Gilmour politely declined.

“I feel like every year since I’ve been retired people have been calling me asking when I’ll do a book,” he tells Zoomer. “I always said, ‘No thanks.’ And then five years ago my dad passed away and then two-and-a-half years after that my mom was diagnosed with dementia and I thought, ‘You know what? I want to keep their name going. I want to do it for them.'”

True to his word, Gilmour spent the last year-and-a-half hard at work with Sportsnet senior writer Dan Robson on his book, Killer: My Life In Hockey (Harper Collins Canada, 2017), which hit bookstores on October 17. A simple dedication bearing the name of his parents, Don and Dolly, opens the 313-page tome that chronicles everything from Gilmour’s earliest playing days to his life as president of hockey operations of his hometown OHL team, the Kingston Frontenacs. In the end, though, the decision to finally put his story down on paper wasn’t about money, publicity or reliving past glories: it was about family.

Here, we sat down with Doug Gilmour to talk family, his Hall of Fame career and the origins of the nickname, “Killer.”

LG: What anecdotes were you most excited to share with readers?

DG: “A lot of the childhood stuff, as well as the parts about the draft and how physically small I was as a player. Most of [the writing process] was myself just trying to remember certain things or it was based on my reminiscing with other people. I mean, I’ll forget your name by tomorrow—but I’ll remember what happened [during this discussion]. I’m just at that stage in life and I meet so many people every day, it’s hard to keep track. I prefer write everything down.”

LG: Your father plays an important role in your book. What’s one of the more interesting things you share in common?

DG: “If you asked anyone who really knows me what I have in my jacket pocket at all times…[reaches into left front pocket and pulls out a wad of tissues]…it’s Kleenex. (laughs) I got that from my dad. He always had a handkerchief on him. If anyone went to try on his jacket, they’d go, ‘What the hell’s this?’ and pull out [this rumpled cloth]. (laughs) Dad was a very outgoing guy. He liked his friends and he liked entertaining. He loved the country life, like fishing and boating. Growing up, I could never figure out why we kept moving every five years or so. He’d just sell our house and make some money and we’d move elsewhere. I didn’t figure it out until later—he wanted to move to the lake one day when he was mortgage-free. So, I share some [of those] similarities to him.”

LAURA GRANDE: You share an interesting story about the true origins of your nickname, “Killer.”

DOUG GILMOUR: (laughs) It was from Brian Sutter back when I was with the St. Louis Blues. At the time, I was maybe 160 pounds and I had a mullet, and I was skinny. He called me Charlie one day, and I was like, ‘Charlie?’ And he told me I looked like [serial killer and cult leader] Charles Manson and I thought, ‘Oh, that’s just great!’ So, it went from Charlie to Killer within a year. To this day, if Brian saw me, he’d call me Charlie. (laughs) But Brian taught me a lot. He taught me how to compete. He taught me how to be focused before a game.”

LG: What’s the one piece of advice that you’d give to your younger self?

DG: “Well, that’s tough. I’ve had bad times; I’ve gone through ups and downs. Your peers are often the ones who have your back and the fans are usually with you, too, but you gotta win. It’s a tough question for me because I’m OK, you know what I mean? I tend not to look at [my career] that way. There’s life in front of me and things change. I don’t want to sit around and be depressed all day. I’d rather grow and figure it out. I try to be positive. Would I have loved to score more goals, like my dad used to say to me after every game? Sure. But I had the chance to play with seven NHL teams and I’ve met a lot of great people, both off and on the ice. I know that people in Toronto don’t like that I played for Montreal, but I’m glad I did. I’m an English-speaking Canadian, but the media there didn’t really deal with me—they wanted to speak to the French guys. I was OK with that. I was at the end of my career, living in a beautiful city and my hometown Kingston was nearby. I don’t have regrets about my last game [as a Leaf]—it happens. Injuries happen. The one thing I am happy about is that I had the chance to put that sweater on one last time. Even though it was only for one period and a shift, I did get to play again with the Leafs. I’m OK with that.”

LG: What do you miss most about playing in the NHL?

DG: “When I retired [in 2003], the thing I said I would miss the most was that moment before you come out onto the ice for a game. The lights are off, the crowd is into it—it doesn’t matter if it’s a home or away game, you still get jacked up for it. I was part of a fantasy camp in Florida [recently] and it was the first time I could remember walking in through the front door of an arena. I’m used to going through the back to get onto the rink. It was neat—I got to walk in with the fans. Obviously you miss your friends and your peers, but the adrenalin you get from stepping on the ice…I wish everyone had at least one chance to experience it. It’s pretty cool.”

LG: If you were to write a follow-up book chronicling the second half of your life, what would you want it to say?

DG: “That’s a good question. Now, don’t laugh at me, but I want to buy antique furniture and re-do it. Not quite like [the TV series] Canadian Pickers, but I want to travel around and buy stuff and re-do it and create my own little fancy label and have a garage sale once a month. I want to put my hands to use and I want to challenge myself. I’m intrigued by it. People often ask me about [returning to] hockey. I’m never going to say never, if it was the right situation. But I’m OK with where I’m at in my life and I just want my family and friends to be happy and healthy.”

Killer: My Life in Hockey is now available in bookstores and online.