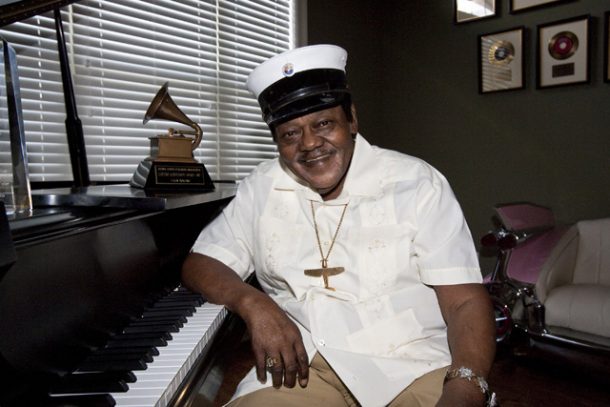 Domino died Tuesday in Louisiana of natural causes, surrounded by loved ones. He was 89.

Fats Domino, whose New Orleans brand of rocking rhythm and blues earned him a place among the founding fathers of rock and roll and countless hit records, including tunes like “Ain’t That a Shame,” “Blueberry Hill,” “Blue Monday” and “Walkin’ to New Orleans” has died. He was 89. The music legend died in his Harvey, Louisiana home of natural causes on Tuesday evening, surrounded by loved ones.

Domino, who was born Antoine Domino Jr. in New Orleans, first nabbed attention with his 1949 record “Fat Man” and eventually emerged through the late 1950s and into the 1960s as one of his generation’s top recording stars, rivalling the popularity of Elvis Presley. Last year the New York Times noted that “He has sold more than 60 million records and, between 1950 and 1963, he made Billboard’s pop chart 63 times and its R&B chart 59 times — more hit records than [Chuck] Berry, Little Richard and Buddy Holly combined.” Domino went on to sell 110 million records earned 23 gold records and had even Elvis himself championing him as the true King of Rock and Roll, having influenced everyone from Presley to the Beatles. As well, his popularity among both African American and white fans served to help break down racial barriers in America at the time.

Domino ranked 25th on Rolling Stone magazine’s “100 Greatest Artists of All Time” and earned induction into numerous music halls of fame, including the Rock and Roll Fall of Fame, Rhythm & Blues Hall of Fame, Louisiana Music Hall of Fame and the Delta Music Museum Hall of Fame as well as receiving a Grammy Lifetime Achievement Award.

In 2005, after Hurricane Katrina decimated New Orleans (including Domino’s home), the rock and roller participated in fundraising efforts to help rebuild the city. In 2012, he played himself on the TV series Treme, about victims of the hurricane rebuilding their lives in New Orleans.

Upon news of his passing, fans and music legends alike took to Twitter to remember the rock and roll pioneer.

I found My Thrill on ” Blueberry Hill”! RIP Fats Domino

Words fail me in this moment of deep heartache and sadness. We have lost a legend. One of my heroes. New Orleans’ Fats Domino is dead. pic.twitter.com/HZNbQRI889

“That innocence is there in his music … people respond to that goodness.” – Dr. John on Fats Domino.
RIP, Fats.https://t.co/99OCUgZNxt pic.twitter.com/FLSTMcJ7M0

Rest in paradise to Fats Domino. He paved the way for so many. I remember listening to his music as a little boy. #Fatsdomino 🎶🎶

So long Fats. One of the greats. https://t.co/xvQyBDm59R

Rock & Roll instigator and innovator The great Fats Domino passed away today. A true icon who paved the way for so many. pic.twitter.com/m7e9MyiZVP

A New Orleans legend — Fats Domino will be missed. https://t.co/4HulGn1Q7W