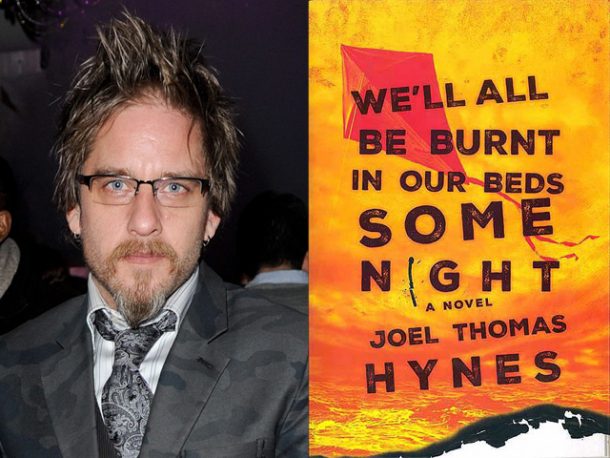 The 2017 Governor General’s Literary Award winners have been announced, with the novel We’ll All Be Burnt in Our Beds Some Night by Joel Thomas Hynes taking home the top English fiction prize.

The novel, about a man named Johnny Keough who skirts prison lockup to hitchhike across Canada in an attempt to deliver his dead girlfriend’s ashes to the west coast, was also longlisted for the 2017 Scotiabank Giller Prize, with the GGLA peer assessment committee calling it, “an act of full-throttle imagination and narrative invention. Johnny is a startlingly original creation. His hilarious yet disturbing journey from St. John’s to Vancouver is unforgettable, tragic and ultimately transcendent.” Hynes, 41, from St. John’s, Newfoundland, has seen his fiction up for major awards in the past, including his debut novel, 2005’s Down to the Dirt, which was longlisted for the prestigious International IMPAC Dublin Literary Award and won the Newfoundland-focused Percy Janes First Novel Award. The book was also adapted into a film, in which Hynes, who is also an actor, dramatist and screenwriter, played the lead role.

The Governor General’s Literary Award, meanwhile, is considered by many to be Canada’s pre-eminent literary prize. Founded in 1936 (it’s our nation’s oldest literary award) and administered by the Canada Council for the Arts, it affords each of the winners $25,000. Winner are chosen by peer assessment committees and categories include English and French-language fiction, poetry, drama, non-fiction, translations and young people’s literature.

The other English-language 2017 GGLA winners are:

On Not Losing My Father’s Ashes in the Flood, by Richard Harrison

From the peer assessment committee: “In these moving poems about the father/son relationship set against the Alberta flood of 2013, Richard Harrison’s intimate yet open voice deftly explores subjects as wide-ranging as childhood, middle-age anxiety, dementia and loss with wonder, humour and resilience.”

From the peer assessment committee: “Indian Arm is a timely and evocative manifestation of the characters’ struggle with their relationship to the land. Hiro Kanagawa masterfully navigates the tension between Indigenous and settler identities as they work to figure out how we can live together. Mythic. Heart-breaking. Poetic.”

The Way of the Strangers: Encounters with the Islamic State, by Graeme Wood

From the peer assessment committee: “The Way of the Strangers: Encounters with the Islamic State by Graeme Wood investigates a much discussed, little understood phenomenon dominating international news. Meticulously researched and fluidly written, this bracing book delves into a contentious facet of contemporary geopolitics.”

The Marrow Thieves, by Cherie Dimaline

From the peer assessment committee: “The Marrow Thieves is speculative fiction with a chilling immediacy. Its unflinching narrative resonates in our disturbing times. Cherie Dimaline’s exceptional writing and authentic characters pull you into a story that lingers and unsettles.”

When We Were Alone, by David Alexander Robertson and Julie Flett

From the peer assessment committee: “When We Were Alone is a poignant story of a dark and unforgettable part of Canadian history. David A. Robertson gently links the residential school experiences to a new generation with an enduring example of healing, love and understanding. Julie Flett’s simple but profound illustrations expertly complement the text and elevate this important story.”

Translation (from French to English)

From the peer assessment committee: “In Readopolis, Oana Avasilichioaei has risen to and matched the stylistic acrobatics of Bertrand Laverdure’s Lectodôme. The many voices of Quebecois writing sing through in this intelligent translation – a vertiginous ode to the pure, if rarely rewarded, pursuit of literature.”

The French language award winners are:

From the peer assessment committee: “In Le poids de la neige, a decidedly Nordic novel, the ubiquitous snow swallows up the country and the people. Against an apocalyptic background, the tension is unrelenting. Minor and major fears are exacerbated, like the dread of betrayal. The poetry in Christian Guay-Poliquin’s writing keeps us spellbound to the end of winter.”

From the peer assessment committee: “In full command of her art, Louise Dupré goes straight to the heart of her own contradiction with La main hantée, adopting a position of extreme risk. She embraces the dark side of human nature, calls upon the living, and produces a work that is an appeal to tenderness, with the poem always at its call.”

From the peer assessment committee: “Senility and deliberate aphasia are now on the menu for Quebec families on their poutine Sundays. That is the provocative observation advanced by Sébastien David in Dimanche napalm, an incendiary play that blows on the embers of memories of recent events. Unforgettable characters who might well sink into the exploding gravy.”

From the peer assessment committee: “Clothed in nostalgia and the poetry of life, this enlightening essay offers a comprehensive look at the relations between the North American landmass and the people who populate it. Its colourful language combines with the tenderness of its gaze in celebration of history, both minor and major.”

From the peer assessment committee: “With an agitated but effective writing style that has a humorous edge, Véronique Drouin’s L’importance de Mathilde Poisson immerses us in the questioning of adolescence. Despite the dark theme, this novel is full of light. Life becomes easier to live when we learn to love ourselves.”

From the peer assessment committee: “Jacques Goldstyn achieves the difficult goal of discussing a serious subject with a touch of poetry. Both images and text strike a fine balance in accurately communicating the emotions of the story. Azadah brings out the power of a dream, and the importance of finding ways to make it a reality.”

Translation (from English to French)

(translation of Barbarian Lost: Travels in the New China by Alexandre Trudeau)

From the peer assessment committee: “With a sober and direct style that holds us spellbound, the translator masters the information in the original text and reconstructs it in French. It gives the impression that the translator is like a journalist who has taken the same journey as the author.”

For more on the Governor General’s Literary Awards, visit ggbooks.ca.