Excerpt: Jann Arden’s ‘Feeding My Mother: Comfort and Laughter in the Kitchen as My Mom Lives With Memory Loss’ 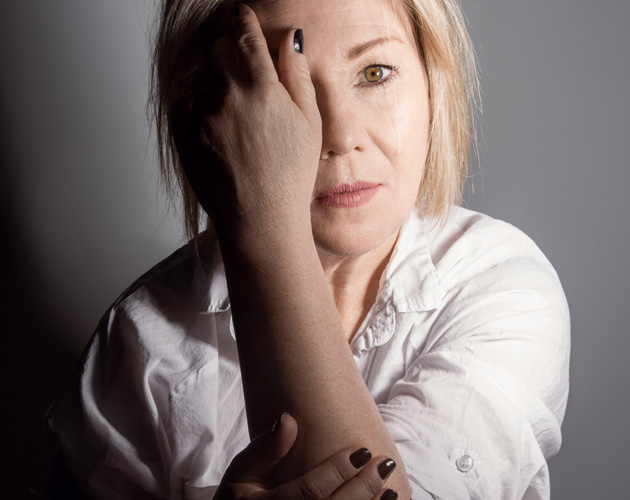 Jann Arden’s beloved mother, Joan Richards, who was a longtime sufferer of Alzheimer’s disease, passed away on Dec. 30, 2018. In a November 2017 memoir, the Calgary-born author and musician gave a piercingly honest account about the journey of a daughter mothering her mother. In this excerpt, she reflects on a Christmas past.

The following is an excerpt from Jann Arden’s book Feeding My Mother: Comfort and Laughter in the Kitchen as My Mom Lives with Memory Loss (Nov. 2017).

December 20, 2014
This year my mom didn’t bring her Christmas tree up from the basement.

For the past decade, when the season was over, she has simply been draping the fully decorated tree with a giant bed sheet and having it carefully carried downstairs and stored in the corner. It suddenly seemed crazy to her to take all the decorations off every year, only to put them on again twelve short months later. “All Dad has to do,” she said, “is plug the damn thing in.”

When I asked her why she wasn’t bringing it up this year, she just said that she didn’t feel like it.

I guess Christmas the way it used to be – the way I remember it – is finally over. I have been having the dinner at my place for the past five or six years, but Mom had always taken the time to at least decorate her house.

She has a little village with street lamps and a church and a preacher and a snowman that all light up. When I was young, I loved looking at it for hours.

She’d put it up on the mantel over the fireplace, just out of reach of our reckless fingers. It’s sitting in its cardboard box now, and I doubt it will ever see the light of day again.

The last year that Mom and Dad hosted Christmas dinner at their place was a few months after my dad had had a fairly major stroke. (He’s had several small ones since.) He had got up at three in the morning and put the turkey in the oven, having stuffed it with a loaf of bread still in its plastic bag. He had sprinkled some kind of spice on it, which we never did identify, and cranked the whole thing up to 475 degrees. My mom smelled something in the night and jumped out of bed to find the turkey burning.

Dad had looked at her with such defeat and shame. On some level, he understood that he’d screwed up and done something that didn’t produce the results he had hoped for – which was making us all a Christmas dinner, just like he had for the past forty years.

Later that day, we made a game out of guessing what Dad had liberally spread all over that poor turkey and had a good laugh. Dad said, “Pepper … lots and lots of pepper, I think …” and then he laughed, too.

This whole entire thing is about love and understanding and failing and getting up and trying over and over and over again to be the best version of ourselves we can be.

December 24, 2014
Another year went slipping past us like a raindrop down a window. I remember on this exact day last year I was sitting right where I am now, reflecting on the previous 365 days of life’s adventures.

Life ain’t for the faint of heart. You have to wake up each and every day and realize that you can and will begin again. It doesn’t matter if you’ve screwed up or lost your way or made giant mistakes or failed or fallen, you can always keep going forward.

You’re not supposed to get it right out of the gate. My favourite people in the world, my dearest friends, all rattle when you give them a shake. They have little pieces that have broken off inside of them that are a constant reminder to them, and me, of how far they’ve come and how much they’ve learned and what they have survived.

The human spirit is unstoppable. You are an intricate part of everything that has ever existed or ever will exist, and that is fucking fantastic. No matter what else is going on.

December 26, 2014
Small changes gather speed and weight, then join together and get big without you really noticing it happening. And then you’re faced with something like making the entire Christmas dinner at your house.

I mean, I’d been asked to bring a salad or a casserole, but never the whole turkey dinner – stuffing, gravy and all. But when Mom and Dad couldn’t manage a big family dinner anymore – it was too confusing and far too complicated for two people who were both well into their respective battles with memory loss – I had to step up.

I remember the last Christmas dinner my parents attempted to put together. Dad was still able to drive back then, and they had picked up groceries, which they both loved to do. They bought all the things that one would need for a holiday feast. And there were still plenty of carrots and potatoes and onions from the garden – thank God, because that year we needed them.

Everything seemed to be in pretty good shape except that my parents had bought a five-pound turkey for fourteen people. I didn’t even know turkeys could be that small. It was Christmas Day, and there wasn’t anywhere we could buy another bird. Dad looked as though he was going to sob, and I did my best to tell him that everything was going to be fine.

I called my brother and told him to bring a ham and I peeled another pot of potatoes. I figured everybody could have a small piece of turkey, a slice of ham and two pounds of potatoes and carrots.

We didn’t have any stuffing, but we did manage to have a whole lotta laughs. I think that was the same year Mom made her famous cheesecake, and we had to eat it out of bowls because it NEVER set. We laughed our heads off eating liquid cheesecake.

January 7, 2015
I had a breakthrough of sorts a few days ago, right after I had a mini breakdown.

I’d asked my mom if she thought she would ever forget me, and she said, “Well, my brain might, but my heart won’t.” Those eight words took my breath away. I felt a weight lift off my shoulders that I’d been carrying for the past few years.

It got me thinking about technology, oddly enough. I sat in my old red leather chair, right by the window overlooking my cluttered deck. It was strewn with shells from the peanuts the squirrels and the blue jays have made quick work of since November (I need to clean them up … I am becoming my mother, ever so slowly). The sun was streaming through the snow-covered spruce trees as if the beams were gliding in along a ruler, and I marvelled at their perfect geometry. But I digress. I was thinking about the “Cloud” – the Cloud that we are forever upgrading and meticulously monitoring to make sure all our files and pictures and contacts and stuff are kept safe and sound so we can find them again and look at them and remember.

Every thought we think, every memory we keep, every fond moment we experience and so eloquently recall as we forge our way through life is important. They define who we are and why we are and where we’ve been. Our thoughts, our experiences, are what make us. Having said that, as I watch my parents lose those precious pieces of themselves, I wonder where those lost memories go. Surely they go somewhere?

I want to believe there is a celestial Cloud, hanging like a fly strip in God’s porch, collecting every single thing we have ever done or said or thought or seen or heard or tasted. It’s all there, stuck to that strip for eternity. We never lose it. It’s saved forever. We are “saved.”

My mom and my dad, and your mom and dad, and every other beloved person, dog and cat and bird and creature – they are all safe and sound and intact. What is forgotten here on earth will be saved.

Excerpted from Feeding My Mother: Comfort and Laughter in the Kitchen as My Mom Lives with Memory Loss. Copyright © 2017 Jann Arden. Reprinted by permission of Random House Canada, a division of Penguin Random House Canada Limited.