“Moses and Music: From City to Zoomer” Exhibit Opens in Toronto 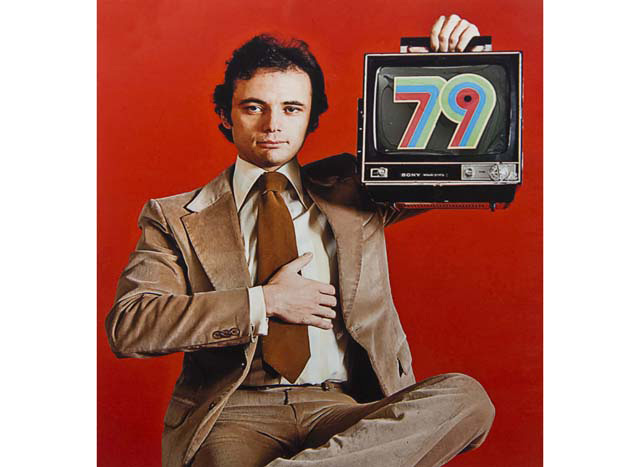 “Find yourself in People City

Stay a while, if you can

With folks who will be tomorrow’s faces

So goes the slow, crooning ballad known as “People City,” familiar to fans of Citytv beginning in the early 1970s as the Toronto-centric tune that opened and closed every broadcast day.

“Moses (Znaimer) commissioned this guy, Tommy Ambrose, to do a love song to Toronto, because he had to sign off the channel every night and he didn’t want ‘God Save the Queen,’ he didn’t want ‘O Canada,’ he wanted something that represented Toronto,” cultural historian and archivist Ed Conroy says. “Tommy Ambrose was like the Paul McCartney of jingles. He was the most famous guy … so they commissioned this song.”

And while Ambrose’s hope that the song would become a “New York, New York” style anthem for Hogtown never quite panned out – it topped out on the adult contemporary charts in 1973 in the 44th spot – it serves as the namesake of a city-wide exhibition by the Toronto-based historical group Myseum dubbed Music From People City, highlighting and celebrating local musical history, artists and innovators.

The exhibits that make up Music From People City are found in various locales around Toronto, but one particular innovator gets the spotlight at the Zoomerplex in Liberty Village – ZoomerMedia founder and CEO Moses Znaimer. Moses and Music: From City to Zoomer charts Znaimer’s career from the launch of Citytv in 1972 through to the creation of shows like The NewMusic and revolutionary television channels like MuchMusic and the programing that helped lay the groundwork for fostering Canadian musical talent across the nation.

“The idea that that network MuchMusic was broadcasting from Prince Edward Island to Vancouver and all of these communities were exposed to this music – and it didn’t matter what genre, whether it was rock or hip hop or classical or whatever – that kind of access is just incredible and it stayed with everybody who experienced it,” Conroy, who curated the exhibit, notes. “And I think you have a generation now of people who are in the music industry and when you ask them what got them into that their answer is going to be MuchMusic or RapCity or The NewMusic. Nine times out of 10 it’s something Moses had a hand in.”

Located, appropriately, in the MZTV Museum of Television and Archive – a massive display of some of the more than 400 pre- and post-war television sets Znaimer’s collected since the mid-1960s – the exhibit contains a timeline of the musical highlights of Moses’ career coupled with artefacts from the past 40-plus years, including “People City” sheet music, one-inch format tapes from the 1970s that contain some of the original Citytv shows as well as episodes of music programs like those that aired on MuchMusic playing on some of the multiple televisions throughout the museum. The exhibit’s even punctuated with a quote from Moses’ boyhood pal, Leonard Cohen, who years later dubbed him “the CPR of music” – fitting given Znaimer, in the early 1990s, helped to breathe new life into the legendary troubadour’s career by broadcasting his music videos.

Conroy says, “The idea was to start with ‘People City’ and just follow through because younger people, certainly, don’t know about all this wonderful stuff that’s gotten us to 2017 and Drake and the Weeknd and everything. The infrastructure and the ecosystem all came, really, from Moses.” He adds that, had Moses not fought, in the 1980s, against media prejudices to offer airtime to music videos – the lifeblood of an artist’s revenue stream then – to artists in emerging genres, like rap, “who knows where we’d be right now? There certainly wouldn’t be a Drake without Maestro and Maestro got his start because of Electric Circus, so when you start to pull the timeline apart you find all these moments that thread into another thing.”

Moses and Music also offers a tip of the hat to MuchFACT, a funding stream for Canadian music videos that Moses helped establish in 1984, and which was cancelled in September of this year by Bell Media. It’s a decision Conroy calls “tragic, because even guys like Director X, who does all the Drake music videos, he came out of the MuchFact world. So … certainly the effect of killing it this year, the reverberations of that will be felt for decades to come.”

Of course, Moses’ work didn’t just impact artists in Canada. A 1998 article in Spin magazine noted that Citytv “has been the blueprint for everything from the Today Show of the 90’s to the recently revamped MTV,” with MTV’s President Judy McGrath flatly conceding, “Imitation is the sincerest form of flattery.”

Beyond the Citytv and MuchMusic years, however, Conroy highlights radio acquisitions including AM740 and The New Classical FM and VisionTV programs like People Who Sing Together and Your All Time Classic Hit Parade – “it just all illustrates to me that there’s certain commonalities in all of his enterprise and music has been at the forefront.

“I love the idea that it was the night they launched MuchMusic – August 31, 1984 – and (Moses) tells this great story about looking around the room and seeing the party and thinking then, ‘What am I going to be doing 40 years from now?’ And apparently that was the germination of the idea for Zoomer, because he started to think about how [he’s] going to get older and everybody’s going to get older and who’s going to be doing this sort of MuchMusic stuff for that generation. So in 1984 he was already thinking about Zoomer, which is amazing.”

Conroy also draws attention to other stations like Bravo! which, in the 1990s, proved one of the only outlets to air classical concerts and opera. “And the fact that Moses had that range to go from RapCity to an opera to classical – that eclecticism is remarkable.”

As for working with Moses himself to put the exhibit together, Conroy says that he had to sell him on the idea – “he’s happy to talk about (his past) but he doesn’t want a big fuss made about it” – but that the curator knew that any celebration of Toronto’s musical history had to include Znaimer.

“It was a total no-brainer. The challenge was really selling him that we should do this here. And I thought that because we had the TVs, because we are celebrating the wonderful broadcast technology, that this made sense. And I think he’s excited about it,” Conroy adds. “There are certain people, and there’s not many of them, who deserve this kind of adulation and Moses is certainly one of them.”

Moses and Music: From City to Zoomer is open at the MZTV Museum of Television and Archive in Toronto from Tuesday-Friday, 2p.m.-5p.m. Click here for more information.