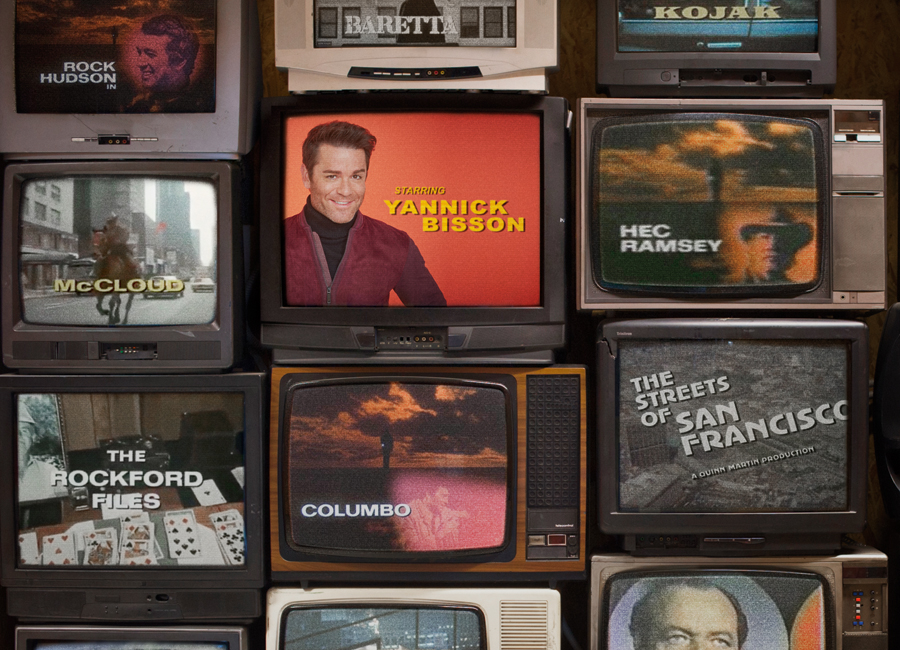 Here, Murdoch Mysteries star Yannick Bisson gets into character as some of television’s most beloved detectives, including himself.

Imagine a clean-cut police detective who gives chase while wearing a bowler hat, impeccably tailored tweed three-piece and, when he arrests the culprit, speaks the Queen’s English. In this case, the Queen in question is not Elizabeth but Victoria – or it was in 1895, the year the Murdoch Mysteries first began solving the crimes of gas lit Toronto.

As the time period it covers has progressed in real time, the series has become one of Canada’s most successful dramas and, a decade later, it has a fanatical following and is broadcast in 110 countries. Some of that success is due to the amiable Yannick Bisson, who has played the Toronto Constabulary’s dapper, earnest and unfailingly polite William Murdoch in more than 150 episodes. The popularity of Murdoch Mysteries is a testament to how deftly the show plays with the lexicon of crime and detection, borrowing from a variety of formulas, genres and incarnations and from one unlikely source.

There’s no rumpled raincoat or signature muscle car, but look past the starched high collars, vintage uniforms and steampunk elements of its period trappings and Murdoch Mysteries also comes from a long tradition of hit television detective series, unlikely as it may seem, a fusion of Golden Age homage and the TV detective formula perfected in the 1970s.

These fondly remembered classic shows all have several things in common besides crime. Chiefly, they are a group effort. A winning formula always includes a winsome supporting cast: Thomas Magnum is nothing without the stern foil of Higgins and wingmen Rick and T.C.; Kojak and his precinct; Mickey Spillane’s Mike Hammer had Velda and Captain Chambers.

Agatha Christie’s fastidious know-it-all Hercule Poirot had his foils in cynical Inspector Japp and guileless Captain Hastings; Murdoch has irascible Inspector Brackenreid and naive Constable Crabtree. He also has a female equal, with the addition of Hélène Joy’s pathologist Dr. Julia Ogden, who began the series as the city medical examiner down in the morgue and, in so doing, brought in aspects of the medical mystery dramas like Quincy, M.E., that sate the more recent thirst for forensic information powering TV franchises, like a turn-of-the-century CSI. Over the seasons, Murdoch and Ogden’s intellectual relationship evolved into a romantic one and, after some will-they-or-won’t-they, they’re now married.

The best detective shows of the 1970s took the show on the road, so to speak, and often shot on location – not just because they had wanted to showcase the cool cars. Like Murdoch’s Toronto, their beat is a place, and on screen it becomes an important character – take Jack Lord, the original Steve McGarrett on classic Hawaii Five-0, careening around in a travel brochure version of the islands. For Columbo, it was the flipside of the affluent entertainment industry – adjacent Beverly Hills denizens that made the iconic howcatchem a love letter to the forgotten corners of Los Angeles.

Murdoch’s canvas revels in the specificity and mines the milieu of what, now in the 11th season, is Edwardian Toronto. Authentic local and international historical figures, scientific advances, political moments and landmark events during a time of great social change are balanced with artistic licence and occasional stunt casting and cameos (in one memorable episode, a moustachioed William Shatner played Mark Twain).

There’s a little of everything, and I mean that literally.

From episode to episode, the form is elastic and unpredictable. Any given Murdoch Mysteries might be one of a dizzying variety of styles in the repertoire of red herrings and misdirection. One week fits a typical police procedural from puzzle mysteries and courtroom dramas to locked-door mysteries and drawing room pronouncements. The show takes justice seriously and, thanks to its costumes, looks buttoned-up, but it has the same playful, freewheeling spirit of the 1970s in that doesn’t take itself too seriously. So while Stationhouse No. 4 isn’t exactly Barney Miller, it does have its lighthearted moments: a time travel to the future à la Quantum Leap that allows Murdoch a goofy fish-out-of-water scenario, or a generation-spanning crossover episode with another popular detective show like Republic of Doyle, to an out-and-out Western pastiche of an expedition to the Klondike.

By the cliff-hanger end of the last season, the inventive cosy had taken an unexpectedly noirish turn. In the hardboiled tradition of Raymond Chandler, Dashiell Hammett and the American anti-hero, Murdoch is alone and on the run, a victim of institutional corruption while framed for murder and trying to save a dame. In his own way, Murdoch’s as much of an outsider as hardboiled gumshoes Sam Spade or Philip Marlowe – a staunch Roman Catholic raised Down East who now navigates the largely Protestant city of Toronto. But the eponymous investigator has a strict moral code as starchy as his collar.

Add an understanding of basic human nature, and age-old motives – greed, lust, revenge – and you’ve got a run that has outlasted all but the perennial reboots of Marple, Poirot and Holmes. But give Murdoch Mysteries time – the 20th century is still young.

A version of this article appeared in the November 2017 issue with the headline, “True Detective,” p. 37-38.