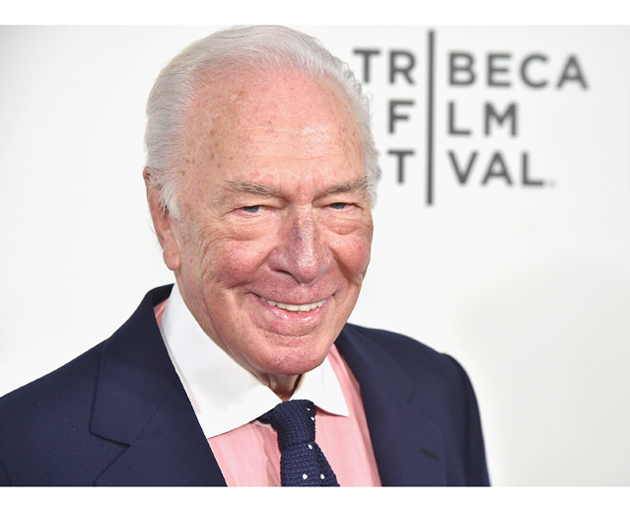 From Christopher Plummer to Eric McCormack to the Canuck-infused animated feature The Breadwinner, Canadians will prove a force at the 2018 Golden Globes.

They call them the Golden Globes but the statuette could take on a maple syrup hue come 2018, when a roster of Canadian nominees vie for one of Hollywood’s biggest prizes.

Canuck acting legend Christopher Plummer, who set the record as the oldest Golden Globe winner ever in 2012 with his Best Supporting Actor win for Beginners (which he went on to win the Oscar for that year – setting the age record there too) is once again in the running for the trophy for All the Money in the World, in which he plays famed industrialist J. Paul Getty. The nomination surprised many as the two-time Zoomer cover subject only recently took over the role from Kevin Spacey, whose scenes had to be re-shot with Plummer playing the part after a series of sexual assault allegations against him arose in October. With a win Plummer, who turns 88 on Dec. 13, could set a new record for “oldest Golden Globe winner ever,” though he does have some competition for that title this year (more on that later).

Toronto-born Eric McCormack, 54, earned a nomination for Best Actor, Television Series, Comedy, for reprising his titular role in the latest instalment of the sitcom Will & Grace while The Handmaid’s Tale, based on the novel by Margaret Atwood, earned three nominations including for Best Television Series, Drama. Canadian co-production The Breadwinner, about a young girl in Afghanistan who must disguise herself as a boy to support her family when her father is jailed by the Taliban, received a Best Animated Feature nod. Co-produced by Angelina Jolie, the film is adapted from a children’s book by Canadian author Deborah Ellis and boasts a large Canuck contingent in the cast – including its star, 11-year-old Toronto actress Saara Chaudry – and had its score was written by Toronto-born sibling composers Jeff, 52, and Mychael Danna, 59, the latter of whom has won a Golden Globe and an Oscar (The Life of Pi) and an Emmy (World Without End: Medieval Life and Death Part 1 and 2) for his work. Meanwhile, Big Little Lies, the hit HBO drama that totalled six Golden Globe nominations including Best Limited Series or Television Movie, was directed by award-winning Montreal director Jean-Marc Vallée, 54.

And as for the quest for the title of oldest Golden Globe winner ever, if Plummer fails to win then there are two other nominees who could unseat him with wins of their own. Famed composer John Williams, 85, is nominated for Best Original Score for The Post while Dame Judi Dench, who turned 83 on Dec. 9, is in contention for Best Actress, Motion Picture, Comedy, for her starring role in the film Victoria & Abdul.

Other prominent boomer Golden Globe candidates this year include Best Actor, Motion Picture, Drama nominees Tom Hanks, 61 (The Post), Gary Oldman, 59 (Darkest Hour), Denzel Washington, 62, (Roman J. Israel Esq.) and Daniel Day-Lewis, 60, (Phantom Thread) for what is reportedly his final role before retirement; Best Actress, Motion Picture, Drama nominees Frances McDormand, 60 (Three Billboards Outside Ebbing, Missouri) and Meryl Streep, 68 (The Post); and the Best Director category, which is dominated solely by boomers: Martin McDonagh, 47, (Three Billboards Outside Ebbing, Missouri), Christopher Nolan, 47 (Dunkirk), Ridley Scott, 80 (All the Money in the World), Steven Spielberg, who turns 71 on Dec. 18, (The Post) and Guillermo del Toro, 53, whose film The Shape of Water earned the most nominations of any film or television show with seven.

Click here for a full list of all the Golden Globe nominees. The 75th Golden Globes take place on January 9, 2018.