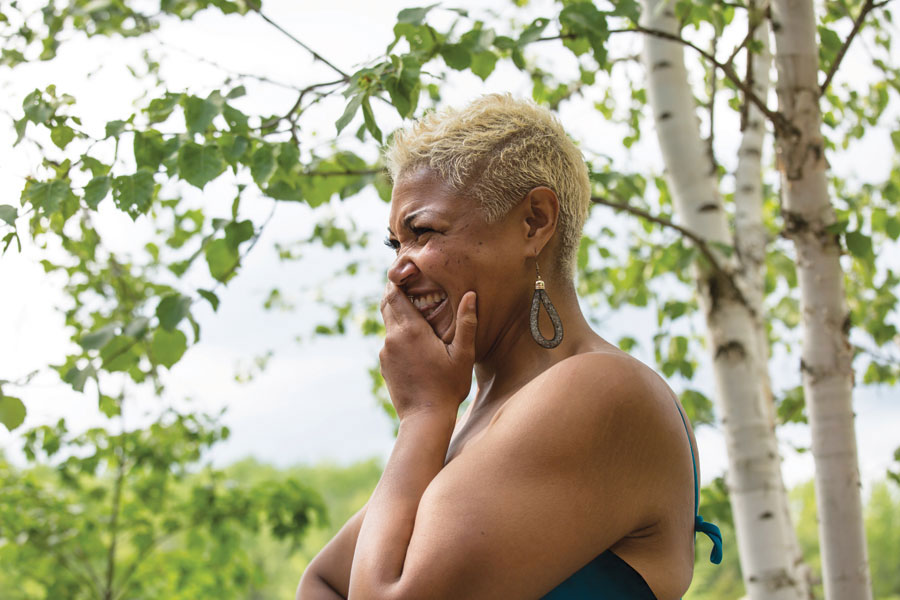 Globe-trotting opera sensation Measha Brueggergosman takes stock of the meaning of Canada at home and abroad.

There is a danger to being Canadian. It lulls you into a false sense of security and makes you feel like democracy, health care and pervasive peace are normal. We could throw a dart at a map, and chances are, however, it will be somewhere where fellow citizens of this world experience a much harsher daily reality. It’s not normal to be set up to have generational prosperity simply because of where you were born. Relative to the “norm” experienced by millions worldwide, for the majority of Canadians, being born here is tantamount to winning the lottery.

What I love about Canada is that it put me in position. Being born female and black, there is so much that would not have been within my reach. I am within striking distance of such prosperity that I know the race has got to be rigged. I have done nothing to deserve this. Yet, through the blessing and grace of positioning, at least five generations of my family (so far) have conceived of, constructed and lived out lives of their own choosing. If I truly believe that to whom much is given much is required, then I am to use my citizenship for God’s glory, which means I am to love and help people with gratitude and thanksgiving. Period. It is a humbling truth that, with a flap of the butterfly wings, I could have easily been born into poverty, a war zone, a contaminated earth. But instead, I live in one of the most beautiful countries in the world, possessing one of the most beautiful peoples in the world.

As I travel the globe singing, I know firsthand that the Canadian reputation for possessing a healthy dose of the right kind of humanity is more than a rumour.

Our niceness is stapled to every comment about us and has secured our reputation at the top of the global food chain. But within our symbolic borders dividing “us” from “them,” we also expand ourselves through a desire to right wrongs, especially once they’re discovered. The campaign to do right is a fight that rages within every human. It is not uniquely Canadian. Our shortcomings and misgivings about doing right by each other are shared universally and aren’t unique to this country. We aren’t the only society to wonder if we couldn’t be doing more. Our outrage at our own missed opportunities and naivety shouldn’t be swept aside and ignored. But mismanaged and inefficiently handled though they may be, the resources at our disposal – both human and fiscal – put us in a position to effect tangible change that can ripple into the darkest corners of inequity, both at home and abroad.

Our idea of “abroad” isn’t the one we grew up with. Borders and monikers lose their meaning because we are them and they are us. There is no divide. In their hearts, Canadians don’t fight this truth. But I know by watching my two- and five-year-old sons that sharing is hard. My sons are punished if they don’t share because compassion is taught. It does not come naturally. We have to forcibly stop ourselves from harbouring half-truths and rhetoric that allows us to keep all the toys for ourselves. But creating space and resources for another sack of flesh and blood is what separates us from the animals.

I have worked hard and sacrificed and lived through periods of plenty and survived periods of none. I have been the kind of poor that forces me to choose between necessities, not excesses. I don’t have job security or a pension. There is no safety net or Christmas bonus. My income bobs and weaves, and I am hardly a genius when it comes to money management but I’d rather be poor in Canada than anywhere else because, even on my worst day, I have enough to give to the person next to me.

So, let’s not discourage ourselves needlessly by fighting among ourselves. Through the sheer force of what glows in the hearts of our populace, we can democratically force the hand of our leaders to do what is right, be it for our First Nations peoples, our new immigrants or for the children of this fifth-generation descendant of emancipated slaves. We have a calling on each of our lives to be more because what we have been given by way of personal autonomy, freedom of expression, landscape and actionable ambition is a resource whose renewal should be celebrated and not be taken for granted. I have the right to choose where I live, the privilege of electing my leaders, the chance to keep my children healthy and my glass half-full of optimism.

Measha Brueggergosman’s memoir Something Is Always On Fire: My Life So Far is out this fall from Harper Avenue.

A version of this article appeared in the November 2017 issue with the headline, “Glass Half Full”, p. 70.