Three’s Company: The Tenors Greet The Holidays on a High Note 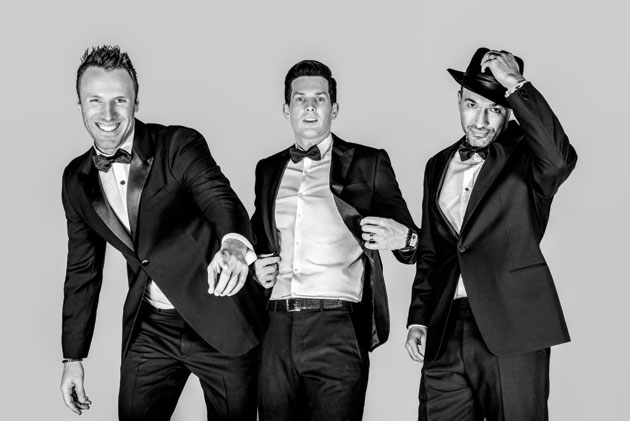 And then there were three. Tenors, that is. Not those three tenors but rather Victor Micallef, Clifton Murray and Fraser Walters – a trifecta of Canadian crooners that boasts both pop star good looks and top-notch operatic pipes. Collectively known as, simply, the Tenors (originally the Canadian Tenors, when the act debuted with different performers in 2004; the current members came together in 2009) the trio’s brand of uplifting operatic pop, or “popera,” has them harmonizing on tunes ranging from classical favourites to Leonard Cohen’s “Hallelujah” to Queen’s “Bohemian Rhapsody.” All told, they’ve scored three platinum albums to date and performed for everyone from President Barack Obama to Queen Elizabeth II to, most recently, Prince Harry and the athletes of the 2017 Invictus Games in Toronto.

In person, their manners and charm call out their Canadian roots – Micallef’s a Toronto native while Murray and Walters hail from B.C. – and within minutes of arriving for a Zoomer photo shoot they’re huddled with a guitar and a microphone, banging out an impromptu rendition of “When We Are Together,” their toe-tapping holiday pop tune that topped the charts in 2015. It’s all in celebration of their first album as a trio, Christmas Together, which explodes out of the gate with the strength of 10 lords a-leaping on a rousing rendition of “O Come All Ye Faithful” before settling in to a blend of beloved carols, the group’s debut a cappella recording, “God Rest Ye Merry Gentlemen” (performed with Juno-winner Johnny Reid) and the Tenor-written original “Santa’s Wish,” inspired by and incorporating the classic Coca-Cola jingle “I’d Like to Teach the World to Sing.”

If the Tenors’ last Yuletide offering is any indication, the success of Christmas Together is assured. Their 2009 holiday disc, The Perfect Gift, similarly offered standards to sip eggnog by, amplified with modern arrangements, guest performers and the group’s celebrated harmonies. That disc went triple platinum – their best-selling album to date.

“Christmas and The Tenors is a beautiful marriage,” Micallef, adorned with his trademark fedora, says, “because the vocal music and the repertoire lends itself so beautifully to the tenor voice.”

The abundance of early holiday cheer also serves as a welcome reprieve from the controversy that landed like a lump of coal in their collective stocking in 2016, when the group’s former fourth member, Remigio Pereira, went rogue and altered the lyrics of the Canadian national anthem prior to the Major League Baseball All-Star Game. He changed the words to include the phrase “all lives matter” and held up a sign with the same phrase written on it, interpreted by most as a criticism of the Black Lives Matter movement against police brutality targetting people of colour. The other three members distanced themselves from the so-called “lone wolf Tenor” and Pereira was removed from the group in short order.

“It was a very tumultuous time, and it was very unexpected but we’re very happy to be moving forward, and we wish Remigio well,” Micallef notes tactfully, adding that having controversy thrust on them, “actually forces you to look inward and challenge yourself even more. And that’s exactly what we did. This year was extra bonding and extra creating, and we feel on top of the world right now.”

It’s a year that’s included everything from working with their life coach to map out future goals to amping up their live act. “Taking chances like we never have before, incorporating new styles of music into our live show; we do Queen now with the leather jackets and some dancing,” Murray explains. “We’re looking for that natural next evolution of the Tenors because everyone gets stagnant, and you don’t want to rest on your laurels.”

Similar formulas proved popular for their musical contemporaries, like classical crossover group Il Divo, who’ve racked up hit records performing everything from R&B tunes to Broadway standards. However, while the Tenors’ vocal range is “magnifico-o-o-o” on rock classics like “Bohemian Rhapsody,” it’s not evolution but a return to their roots of songbook and classical standards that seems to bring out their best – especially around the holidays.

“For us, music has always been the focal point at Christmastime,” Walters says, noting the Tenors grew up singing with their families and in the community during the holidays. “I [still] always sing at church on Christmas Eve. They gave you the opportunity growing up to practise the art form, and now this is one way of giving back.”

True to form, the Tenors plan to sing away the season both privately – Micallef and Walters are spending Christmas at home with their wives and kids while Murray and his wife and extended family head to Bora Bora – and on the road for the Christmas Together North American Tour where, much like jolly old Saint Nick, they’ll spread joy and good tidings to all the good boys and girls lucky enough to find concert tickets under the tree.

“Every year since we’ve been in this group we’ve had a Christmas concert, and it’s always been a great response taking it all across North America,” Micallef says. “And we just hope that we get to share the music of Christmas until we’re looking like Santa ourselves.”

Christmas Together is available in stores and online now. For tour dates and information, go to tenorsmusic.com.