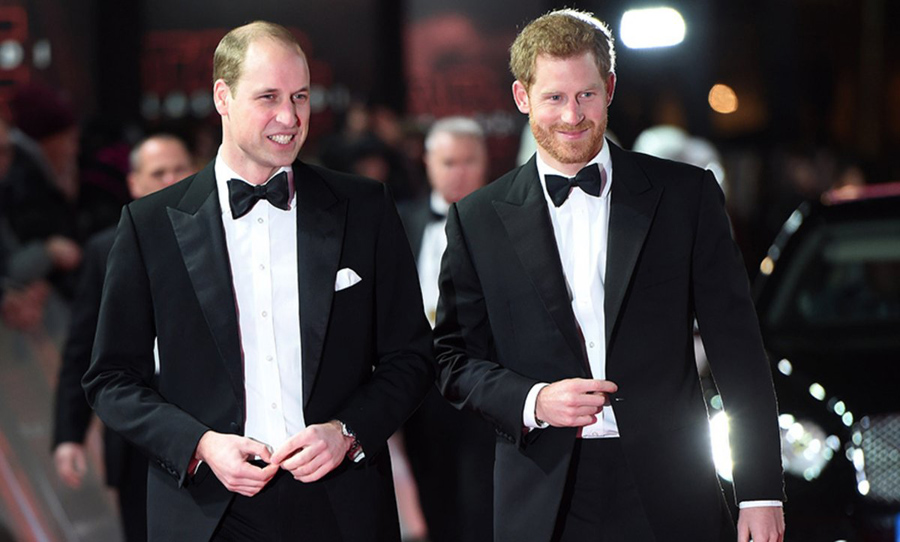 May the Force be with them: Princes William and Harry stole the show at the London premiere of the latest Star Wars movie.

The royal siblings stepped away from Kensington Palace and into a galaxy far, far away this week.

Prince William, Duke of Cambridge, and the newly-engaged Prince Harry walked the red carpet at the Royal Albert Hall on Tuesday (Dec. 12) night at the London premiere of Star Wars: The Last Jedi. The royals mingled with the film’s stars, including Mark Hamill, Daisy Ridley and pint-sized android, BB-8, who rolled right up to the royals and bowed to them in front of throngs of fans and photographers.

Both avid, lifelong Star Wars fans, the Duke and Prince Harry are rumoured to have filmed a small cameo appearance in the latest installment. Although it would likely be next to impossible to identify the duo in the film—if they do indeed appear as many have speculated—the film’s cast has kept mum as to whether the royals truly did make a brief appearance.

However, many have it on good authority that the princes appear as Stormtroopers, continuing the franchise’s recent tradition of placing famous cameos inside the famous snow-white Stormtrooper suits. Most recently, the current James Bond, Daniel Craig, played a Stormtrooper in Star Wars: The Force Awakens.

The royal siblings visited the set in April 2016 to meet with the cast and crew and performed a mock lightsaber battle (above), which added fuel to the rumour mill. The trip was meant to “recognise the wealth of British creative talent involved in the production of Star Wars films,” Kensington Palace wrote in a tweet.

The star-studded London premiere this week was in aid of the Royal Foundation of the Duke and Duchess of Cambridge and Prince Harry, and included more than 400 youth, military veterans and volunteers joining the royals to watch the film. Families who were affected by the Grenfell Tower tragedy, as well as representatives from the local fire services, were also in attendance.

Tonight’s Premiere is supporting The Royal Foundation – we are honoured to have so many of those involved in the projects as guests tonight. @EndeavourFund @WeAreCoachCore @fly2pole pic.twitter.com/CANnMpkrIg

Those lucky enough to watch the premiere screening also revealed that Star Wars: The Last Jedi movingly ended with a dedication to the late Carrie Fisher, who famously played Princess Leia. The actress died at age 60 last December, after filming had already begun.