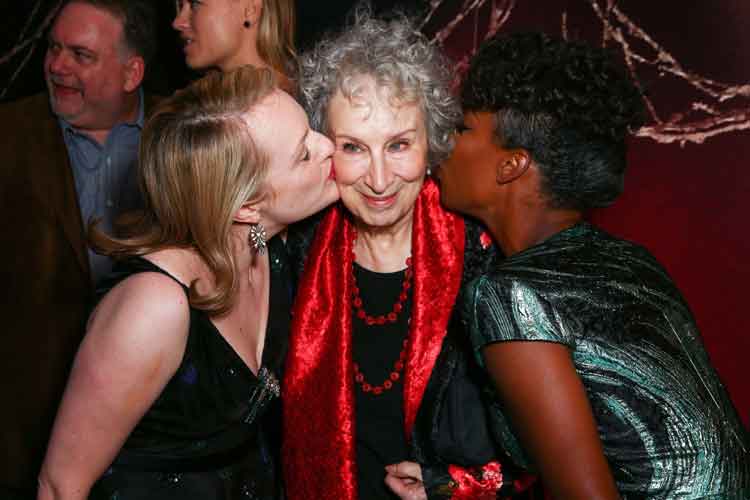 To say our very own Margaret Atwood is having a moment is an understatement. USA Today has named her one of ten people making the biggest impact in entertainment in 2017! And it comes as no surprise.

While the author has long been one of our most respected cultural exports, in today’s mash-up of platinum television meets gutter politics, Atwood’s work is seen as downright prophetic. In her 1985 dystopian novel The Handmaid’s Tale, a totalitarian society has overthrown the American government and taken away women’s rights, a new class of women are kept for reproductive purposes—handmaids—in sexual servitude.

The 10-episode limited television series produced by American streamer HULU, and on which Atwood served as consulting producer won eight Emmy Awards including Best Drama Series (photo above: Atwood charmingly took her purse onstage with her as she accepted the award with cast and crew). The Handmaid’s Tale is also up for three Golden Globe Awards including Best Performance by an Actress in a Television Series – Drama, Elizabeth Moss and Best Television Series – Drama.

That’s not the only Atwood intellectual property getting the love, the CBC/Netflix adaptation of her novel Alias Grace – a Canadian production written by Sarah Polley and directed by Mary Harron, featured on the cover of our October issue – has received rave reviews from international critics.

On April 26, Atwood was on the red carpet in New York for the series premiere, alongside stars Elizabeth Moss (Mad Men) and Alexis Bledel (Gilmore Girls).