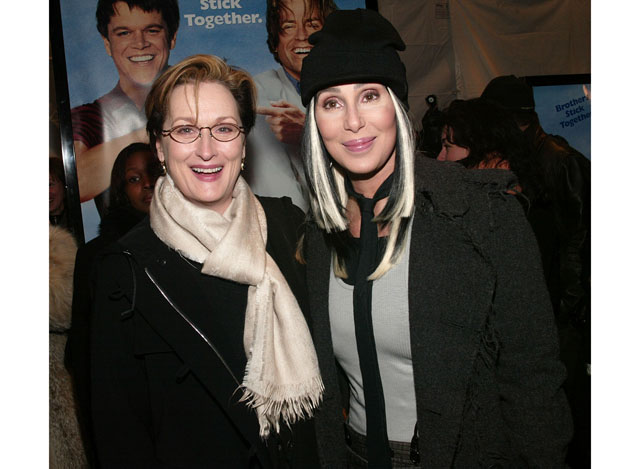 With the Dec. 21 release of the first trailer for Mamma Mia! Here We Go Again – the sequel to the hit 2008 film Mamma Mia! – stirring up controversy online by giving the impression that Meryl Streep’s songstress character, Donna, has been killed off for the sequel, another curious detail is being largely overlooked: Cher, 71, is cast as 68-year-old Meryl Streep’s mother!

Okay, lets take a step back. In the first film, Streep played Donna Sheridan, a former singer who owns a villa and is hosting her daughter Sophie’s wedding. However, as Sophie never knew who her birth father was – knowing it could be one of three men – she invites all three to her wedding to find out the truth. Hilarity, drama and ABBA musical numbers ensue and, at the end of the film, Sophie postpones her wedding and never actually learns the identity of her real father.

Fast forward to the trailer for the sequel, where it appears that Sophie is pregnant out of wedlock. She worries about what to do when she reminisces about how her mom went through the same thing. The trailer shows multiple flashbacks to Donna’s youth, with actress Lily James playing the younger version of Meryl Streep’s character. In the scenes that take place in the present, Sophie only refers to her mother Donna in the past tense, lending credence to the idea that Donna is dead.

However, the trailer also shows Sophie holding a party when Cher arrives. Sophie calls her “grandma” and the credits for the film list her as playing Donna’s (Streep’s) mother. Multiple reports from this past October claimed that Cher played Donna’s mother in the flashback scenes in the sequel, but the trailer shows otherwise. Cher clearly appears in the present day – not in the flashbacks – which means that, if Donna isn’t dead or otherwise indisposed, we could get a scene where the Silkwood castmates reunite and appear side-by-side, playing mother and daughter while, in reality, they’re only three years apart!