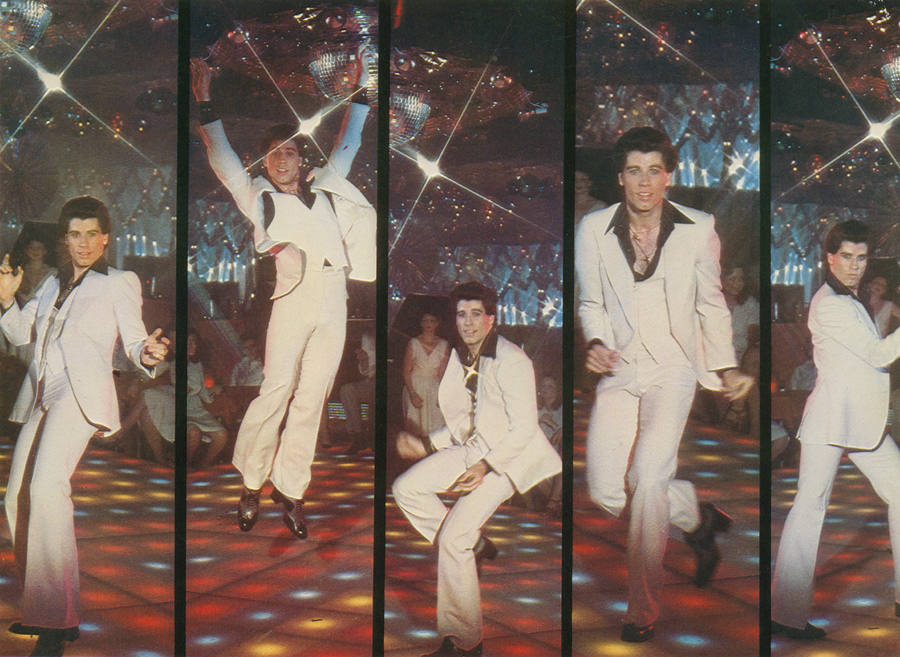 By day, he was a working class kid living at home with his parents. By night, he was a hip-swiveling disco king with a steady stream of girls at his side.

Tony Manero (played by John Travolta) became an overnight icon of the disco era, a foul-mouthed paint shop clerk with a vested interest in his hair and clothes.

Saturday Night Fever was released 40 years ago (Dec. 2017), and went on to become one of the biggest dance movies of all time. It also turned Travolta into a household name, solidified the Bee Gees’ blossoming music careers and helped usher in the age of disco.

Not bad for a film based on a fabricated New York magazine article written by British music journalist Nik Cohn. The 1976 piece, titled “Tribal Rites of the New Saturday Night,” chronicled the life of a troubled, working class guy named Vincent who was also happened to be a great dancer. Years later, Cohn confessed that his article’s groovy anti-hero was “a total fabrication.” (Get more details on the scandal here.)

Now, at 40, Saturday Night Fever is a time capsule; one that perfectly preserves the subculture of the drug-fuelled disco era in Brooklyn, New York. It was a time of symphony-orchestrated danceable melodies, pre-AIDS promiscuity and bold high-fashion clothing; a time when aimless teens sought escape from their reality and comfort in the strobe lights and lit-up dance floors. A time when people just boogied the night away.

Now, four decades after its release, it requires another viewing, right? So get your dancing shoes on as we share five reasons to revisit the classic disco drama.

1. The soundtrack
Let’s get the obvious one out of the way first: Where would Saturday Night Fever be without its killer soundtrack? Yes, the film had drama, angst and sexual content, all of which frequently translates into box office gold. However, we often forget the cultural impact of such toe-tappers as “Stayin’ Alive” and “Night Fever” and how the music, largely composed and performed by the Bee Gees, officially marked disco’s entry into the mainstream.

Although the Bee Gees didn’t become involved with the film until the post-production process (prior to that, Travolta filmed his dancing sequences listening to the grooves of Boz Scaggs and Stevie Wonder), Saturday Night Fever went on to become the only disco album to ever win a Grammy for Album of the Year.

Even though the brothers—Barry, Robin and Maurice Gibb—didn’t start their careers with disco tunes (their musical origins were recently described, rather accurately, as “melancholy pop” by The AV Club), they still “had an innate understanding of disco’s complex emotional dynamic, the undertow of melancholy lurking beneath the dance floor euphoria,” wrote The Guardian‘s Alexis Petridis.

In the last 40 years, the album has retained its reputation as one of the biggest film soundtracks of all time. In fact, it sits in second place on the charts, behind only 1992’s Whitney Houston-led soundtrack for The Bodyguard.

Fun fact: In 1978, Sesame Street even got in on the phenomenon, releasing a Sesame Street Fever parody album featuring fuzzy, blue-hued Grover in Travolta’s signature role. Much like the original soundtrack, it was a surprise commercial success and was certified Gold by the Recording Industry Association of America (RIAA).

2. The fashion
It was the ensemble that came to define a generation—a pristine white three-piece polyester suit that a hip-swiveling Travolta wore during the film’s climactic dance contest at the 2001 Odyssey disco club.

The suit is so iconic, so ingrained in our subconscious, that people often forget Travolta spends the majority of the film wearing darker clothing, specifically red and black combinations; far less flashy an outfit compared to the snow-white double-breasted suit.

3. John Travolta’s breakout performance
Before the big-budget action flicks and Scientology, Travolta made a name for himself as Vinnie Barbarino on TV’s Welcome Back, Kotter. But it was Saturday Night Fever that made him a household name and kickstarted his film career. His portrayal of the arrogant, yet vulnerable, Tony Manero, even landed Travolta an Oscar nomination for Best Actor.

At 24, he was one of the youngest actors to nab an Academy Award mention and it worked wonders for his career—his follow-up movie was the smash musical, Grease.

4. It’s gritty realism
Saturday Night Fever was more than its disco soundtrack and fashionable clothes—it was a gritty, honest exploration of restless teen angst told from the viewpoint of Tony Manero, a 19-year-old Italian-American living on the fringes of society. Growing up in a stagnant environment—working class Brooklyn—has taken its toll on Tony as he struggles to escape his dull life.

As Stephanie (played by Karen Lynn Gorney) harshly point out to Tony in the film: “You work in a paint store, right? You probably live with your family, you hang out with your buddies and on Saturday nights you blow it all off at [disco club] 2001, right? You’re a cliche. You’re nowhere, on your way to no place.”

The music may be peppy and danceable, but there’s a dark edge to Saturday Night Fever—one that exposes the rampant racism, homophobia and misogyny of New York at the time and how young adults like Tony got caught up in its web.

5. The choreography
Disco, at its core, was a reaction against the domination of rock music in the mainstream. It united men and women from different backgrounds with its playful, sensual and memorable dance moves. Who could ever forget how to do the Hustle?

Saturday Night Fever fully embraced this counterculture and staged elaborate dance sequences featuring Travolta and a cast of talented extras. The strobe lights, the smoke, the disco ball, the outfits—all came together in perfect unison to the tunes of Kool and the Gang, The Trammps and KC and the Sunshine Band.

“Travolta on the dance floor is like a peacock on amphetamines. He struts like crazy,” wrote the late film critic Gene Siskel, who frequently cited Saturday Night Fever as his favourite film of all time. We can’t help but agree.

Can you dig it?