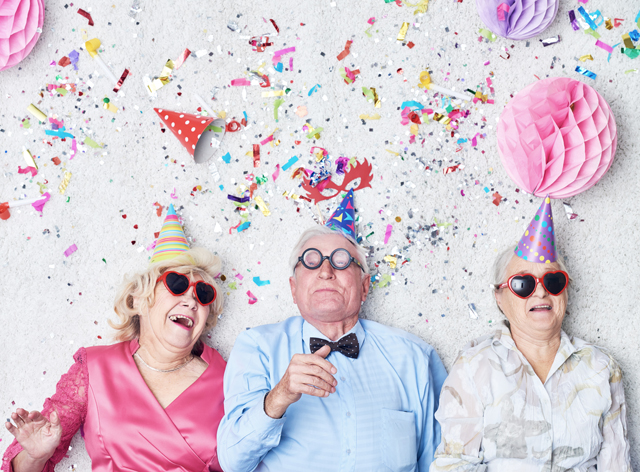 A look back at the good and the bad of 2017 via Zoomer’s monthly This Way Up feature, which chronicles the peaks and valleys of aging.

According to legend (and by “legend” I mean Wikipedia), the centuries-old concept of “Baby New Year,” a newborn who represents rebirth and who is usually depicted wearing a diaper and a sash with the year written on it, arrives as “a baby at the beginning of his year, but … quickly ages until he is elderly (like Father Time, with whom he is often associated) at the end of his year.”

Of course, the concept of the year “dying” when it reaches the “elderly” stage makes little sense when you consider someone like Hollywood legend Kirk Douglas who, while he might be “elderly” compared to Baby New Year, turned 101 on December 9 and is still going strong. The Spartacus star even celebrated the occasion with none other than Dame Judi Dench, who turned 83 on the same day. And since aging is not synonymous with death, just as “rebirth” and “new beginnings” aren’t synonymous with “youth,” why not keep 2017’s “elderly” momentum going and start 2018 not with a “Baby” New Year but a “Boomer” New Year? It’s inclusive, promotes positive attitudes toward aging and anyone can join in! Just slap a sash and speedo on grandpa and let the New Year’s party begin!

If, however, you need more evidence of how well the year 2017 aged before explaining to grandpa why he’s suddenly in need of a bikini wax, look no further than This Way Up, a cheeky (and slightly exaggerated) take on the peaks and valleys of the aging journey – from science news to celebs to ordinary boomers doing extraordinary things – that appears in every issue of Zoomer magazine. We’ve compiled our favourite This Way Up moments from the past year, including 17 Ups, and a few Downs (you can’t have one without the other), to show just how well 2017 aged.

Lets start with the Ups …

1. Minnesota woman, 92, melts hearts by serving as flower girl at her granddaughter’s wedding: “Not my heart,” retorted the bride’s disgruntled four-year-old niece, who just knows she’d have looked cuter in that dress.

2. Well, this explains all the Mars bar wrappers and Victoria’s Secret bags at Grandma’s house: Separate studies show that both chocolate and regular sex can improve cognitive function in older adults.

4. Women over 65 who drink multiple cups of coffee a day may be less likely to develop dementia: Or, you know, blink.

5. As well, a Spanish study says people over 45 who drink four cups of coffee a day could live significantly longer than those who drink none: Upending traditional wisdom about the benefits of tea, which avid drinkers believed would help them live oolong time.

6. Seniors at a Boston retirement home knit clothes for local chickens to help keep them warm in the winter: It’s a departure from the more traditional method for keeping chickens warm – a rotisserie.

7. This is a brave statement, and it also finally explains why, even though she came and she gave without taking, Barry sent Mandy away: 73-year-old Barry Manilow comes out as gay on the cover of People magazine.

8. Ohio woman, 75, comatose for a month and taken off life support, wakes up healthy and returns home: “How is Hillary doing as president?” she asked upon waking. And did that nice Barry Manilow find a girl to settle down with yet?”

9. Actor Tom Hanks, 60, creates an iPad writing app that mimics the sound and appearance of typewriting: Which means you can “Cast Away” other writing apps that “Sully” your tablet because this is “Big.” Really, it’s in a “League of Its Own.” It’s worth walking a “Green Mile” to find … okay, I’ll stop.

10. Stats show that the number of men 40-plus fathering children in the U.S. has doubled since 1970: Similar results were recorded in Britain, though it’s an artificial increase largely attributed to members of The Rolling Stones.

11. We don’t know Victoria’s secret, but Mercy’s is clearly “screw age and flaunt what you got”: New Zealand-based clothing company makes 56-year-old model Mercy Brewer the face of their lingerie campaign.

12. New poll ranks Canada as the fourth best country for retirees, with New Zealand taking the top spot: They say it’s because of New Zealand’s beautiful landscapes and quality of life, but surely the 56-year-old lingerie model didn’t hurt.

13. Amazing Race: Kathrine Switzer who, in 1967, became the first woman to officially run the Boston Marathon despite organizers physically trying to stop her, runs it again in 2017 at age 70.

14. Zoomer’s philosophy is contagious: Allure magazine features 72-year-old Helen Mirren on its cover and rails against “anti-aging,” with editor-in-chief Michelle Lee saying the term is “subtly reinforcing the message that aging is a condition we need to battle.”

15. While hunting with her grandkids, an American woman, 60, caught a near-500 pound alligator: It’s no big deal, though she admits the nickname “Gator Granny” is kind of badass.

16. The definition of “It’s never too late…”: U.K. woman, 87, is learning to read so she can fulfill her dream of going to the library to take out a book.

17. Scottish dance partners aged 85 and 90 tell the BBC that you can still dance regardless of your age: “THANK YOU,” a validated Mick Jagger declared as he chicken-danced out of the room.

And, of course, there were a few Downs…

1. “It’s disappointing news,” Count Dracula’s spokesperson admitted. “I mean, he doesn’t drink it for the taste”: Scientists announce that an infusion of young blood doesn’t help stall the aging process.

2. When you reach a certain age you expect the doctor to ask you to bend over. You don’t, however, expect it from the U.S. President: AARP speaks out against President Trump and the Republican health-care legislation, which they say will cause great physical and financial harm to American seniors.

3. Scientists are looking into why sex drive often drops in women aged 50-plus: And they’re starting with the 50-plus man plopped beside them on the couch, for whom a broken waistband is no reason to toss away a (mostly) intact pair of underwear.

4. Something is definitely rotten in Denmark: After Denmark’s Queen Margrethe II, 77, commissioned a dual sarcophagus that’s taken years to sculpt, her hubby, Prince Consort Henrik, 83, refuses to be buried with her because she never elevated him to the title of King Consort.

5. The stress of dealing with age-related hearing loss is felt by loved ones as well as the person with declining hearing: … researchers shouted recently.

All Ups and Downs considered, we’d say it was a pretty triumphant year for the 45-plus crowd. So with that, pop the champagne, bring out Boomer New Year and let’s all tackle 2018 with the zeal and determination of Gator Granny!