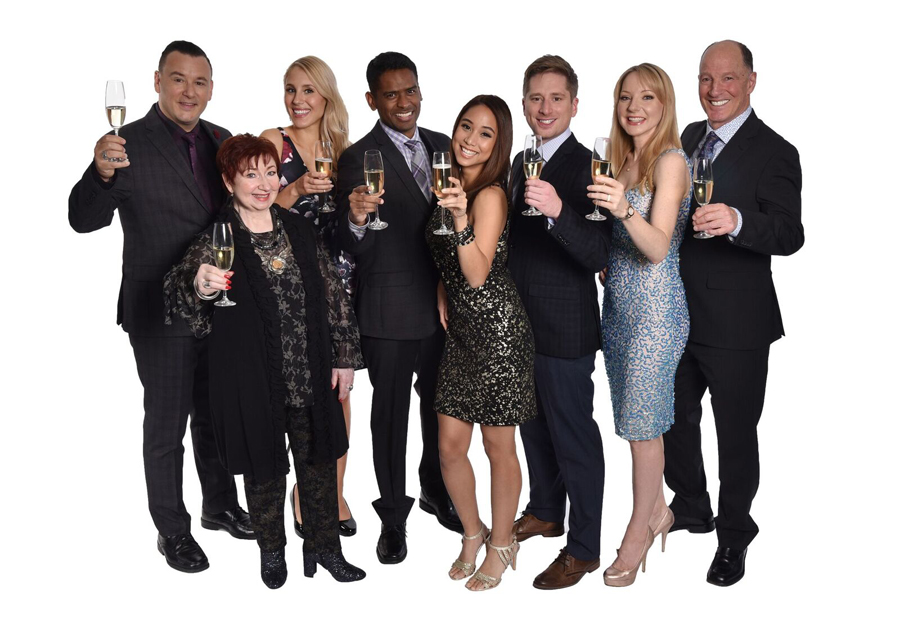 What started as a troupe of four in 1992 (Don Ferguson, Luba Goy, Roger Abbott and John Morgan) has since expanded into a cast of eight, including Jessica Holmes, Craig Lauzon and Darryl Hinds. This year, the Air Farce New Year’s Eve special takes aim at Kim Jong-un, Vladimir Putin, Donald Trump, Justin Trudeau and Jagmeet Singh, among others.

Here, we catch up with Don Ferguson to chat about his 25 years with Air Farce.

Laura Grande: How do you prepare for your impersonations?
Don Ferguson: “The writers [on Air Farce] have a performer in mind when they write stuff. The fun part is the challenge and whether we can pull it off. For me, though, I’ve always had two things in mind before I impersonate somebody. One is, how do they walk? A person’s gait helps me get into who they are. I also don’t really pay too much attention to their mannerisms or their voice—I really try to find out who the hell this person is [on the] inside. What makes this person tick? If I could get down the walk and get a handle on who this person is, the rest just comes [together]. The best ones [to imitate] are the people who are the most distinctive. For example, the biggest problem I had was with Paul Martin when he was prime minister. He was just very bland. There was nothing for me to hook into. But other people had a lot of character, like Pierre Trudeau.”

LG: Who was the first person you ever impersonated?
DF: “This is going back a long time now, but it may have been Robert Stanfield who was a one-time leader of the progressive conservative party. Now this would have been in the 1970s. I know I did Pierre Trudeau around that time, too, but I don’t know that I did him first. The funny is that, early on, I did Prince Charles—and yet I’m still doing him. I don’t feel bad for myself, but I do feel bad for him. The guy still hasn’t become king.” (laughs)

LG: Who do you think you impersonate the best?
DF: “I think I did a really good job of Pierre Trudeau. I used to do Ronald Reagan very well, but I don’t think it ever made it on TV—I only did it on stage and on the radio. I had great fun doing Joe Clark when he was leader of the progressive conservatives, but I played him very broadly. I did everything but have him fall flat on his face whenever he’d enter a room. (laughs) We never wanted to do anything that involved prosthetics or got too involved in makeup. We’ve always wanted people watching the show to see the actor behind the impersonation. We didn’t to disappear behind the mask. But also, because of the nature of our show, especially on television, the costume changes had to be quick because we were in front of a live audience. But we’ve always depended on broad strokes [anyway]; more of a caricature than an accurate rendering. If you get the key stuff well enough, then people would know who you are supposed to be.”

LG: When the Air Farce troupe first got together in the early 1970s, did you have any inkling that it would be adapted for TV?
DF: “No, when we were doing the stage show, we were just hoping it wouldn’t come to an end. We started at the Poor Alex Theatre in Toronto, which is now gone. I think it only had 150 seats. We’d hoped to move onto something bigger—or at least more financially rewarding. I remember, one time, early on, when we were still working at the Poor Alex, we’d approached CBC Radio to see if they’d give us a shot at something and they declined. But what CBC Television later did do is have their sound effect people go and record our audience laughing because they needed the laughs to use on the Wayne and Shuster special. We kept thinking, ‘Why don’t you hire the people who get the laughs? Wouldn’t that be a good idea?’ That was my first educational moment in how TV works.” (laughs)

LG: Who are some of your comedic influences?
DF: “I enjoyed Woody Allen back in the day when he was a stand-up comedian. He was very hip, very New York. I also liked Bob Newhart. These guys weren’t doing visual stuff—it was all stand-up. It was terrific. There was a British radio show that probably everyone my age cites, and that’s The Goon Show. Although, I have to confess that with my young ears [as a kid], I often found it hard to decipher all those British regional accents. Shelley Berman, who died recently, was also a great stand-up. As I got older, Max Ferguson, no relation to me, had a radio show on CBC and he would get a copy of the Globe and Mail and find an article and put together a sketch based on it. It was only about four minutes or so and it wasn’t a laugh-a-minute—it was more like satire—but it certainly was an influence on me [because it showed] what you could do on radio. Those were some of the people I liked the best.”

LG: How has the Canadian comedy landscape changed since you first came on the scene?
DF: “Well, at one time we were part of its future! (laughs) There were not a lot of places to do comedy back then. Toronto comedians used to do these small supper clubs that had revues. There was no political satire or anything like that going on. Because [Air Farce] was doing an improv stage show, we just asked audiences what subjects they wanted us to cover. Nobody was doing that kind of thing at the time. We were really the only game in town and we grew from there.”

LG: What have you learned during your years working with the Air Farce team?
DF: “I’ve learned to be tolerant and patient. (laughs) All kidding aside, what really made Air Farce work was that, early on, we realized that we were a group of people with totally different backgrounds [who came] together for the common purpose of making people laugh. You have to learn to get along with other people, and generally we did get along quite well, but it’s a lot like being married to five people. There was always somebody in the doghouse. We all took turns and rotated. You just stick it out and keep going. Dave Broadfoot, who died recently, had started back in the 1950s with the Spring Thaw revue and travelled across Canada…Dave had the most experience of any of us. He had made a good living as a stand-up comedian in a time when no places hosted that. He performed at legion halls, corporate events, and stuff like that. He had vast stores of knowledge and experience, but we all learned from each other.”

LG: Air Farce New Year’s Eve features a multi-generational cast. What has that experience been like?
DF: “It’s been great fun and it’s given me the chance to be in Dave Broadfoot’s position. He was 20 or 21 years older than me. But I love it, it’s great. At one point, I was the youngest [in the troupe] and now I’m the old man and Luba [Goy] is the old lady. I’ve often said over the years that I’m so glad I’m in Air Farce because if I had to go out and audition I’d never get into [comedy] now because I’m not good enough.” (laughs)