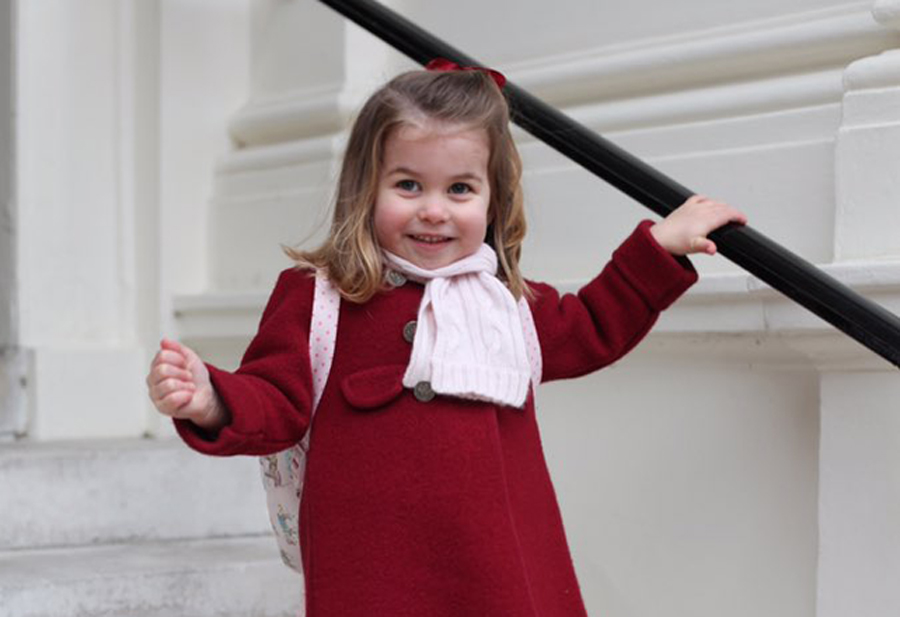 The toddler embarked on her first day of nursery school on Jan. 8—and the photos are just as adorable as you’d expect.

At age 2, Princess Charlotte is about to set out on her own little school adventure, just like big brother Prince George did back in September. The littlest royal is all set to attend her first classes at the Willcocks Nursery in Kensington—and she was certainly dressed for the occasion.

Wearing an adorable burgundy Razorbil wool coat by British children’s clothing label Amaia, with matching Mary Jane shoes and brightly-coloured bow, the tot smiled for mom, Catherine, the Duchess of Cambridge, as she posed for a couple of family snaps before starting her big day. Make no mistake—this toddler is definitely not camera-shy. It’s no coincidence that the Buckingham Palace Shop also happened to release their charming Back to School collection on the same day, advertising “charming gifts [to put] into backpacks, as you wave off the little ones to their first day at nursery.”

The Duchess of Cambridge and and Prince William chose the £14,550-a-year Kensington nursery for its close proximity to their London home. The 53-year-old school was founded in 1964 by Diana Willcocks. The current headmistress, Lavinia Taylor, greeted the royal family as they arrived on the grounds of the school.

The Duchess was even able to walk her daughter to school this time—a memorable parenting milestone she was forced to miss out on with her four-year-old son in September due to acute morning sickness, a result of the condition hyperemesis gravidarum. The Duchess is expecting her third child in April. No doubt Princess Charlotte will make fast friends with her new classmates—the toddler continually manages to steal the show when out and about with her family. She’s a natural charmer.